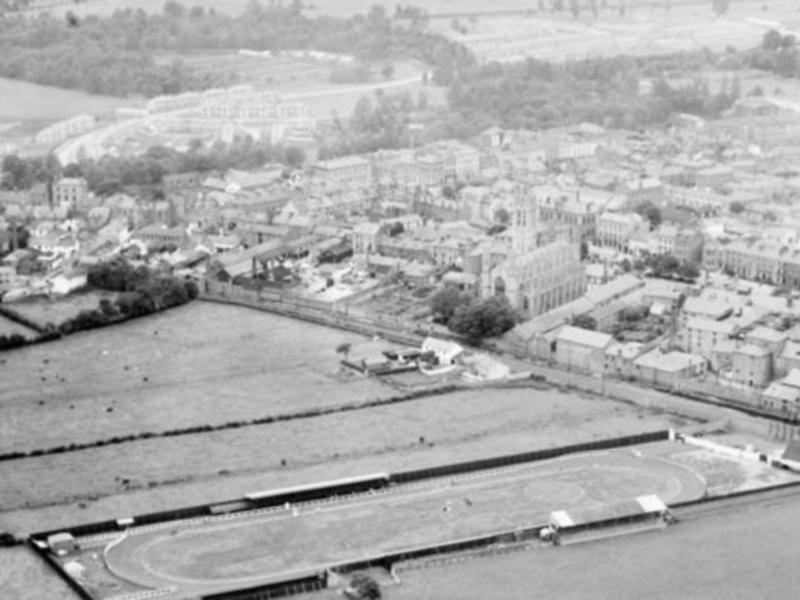 The answer to the question about Dundalk Agricultural Show in this week's Question Time has reminded me about the importance of this event in Dundalk's social calendar of more than half a century ago. The Show was particularly significant to the town in the 1940s when their were few other entertainments.

It was a time when mobile phones and drones were not even imagined by Irish people, no television and 'wireless', as we then called the radio medium, was the wonder of the day! The show was held over two days in September at the Athletic Grounds but it was talked about for weeks. Many local people exhibited in the various classes and many more attended, especially to watch the horse jumping events on the sports field where famous riders, including Irish Army officers in their dress uniforms, competed.

I have in my possession an old, tattered, copy of a 'Catalogue of Exhibits' for the Dundalk Show of 1947, printed in the Dundalk Democrat printing works at 3, Earl Street. The Show that year was held on Thursday and Friday September 18 and 19, which, I believe was a little later than usual. The annual Show was normally held during the first week of September. Owen B. McGahon, who worked as a journalist for the 'Democrat' for over sixty years and was Honourary Secretary of the Show from the 1930s until he opened his stationary shop in Earl Street in the early 1950s, once told me that the Show was to take place when World War 11 was declared on September 3, 1939. This was a Sunday and the first day of the Show was due on the following Tuesday morning September 5. Owen's father was the Editor of the Democrat at the time and, I think, President of the Show Committee. I recall that he told me that he discussed with his father on the Monday morning whether or not the Show should be postponed or even abandoned altogether. In the end the Committee decided to go ahead but he had to go down to ensure that the windows were blacked-out on the two halls at the Athletic Grounds because of the lights that were used to illuminate the exhibits. Such was the great fear of air raids at the time!

According to the 1947 catalogue Owen was then still joint Hon Secretary of the Show Committee, along with Peter Ward of Park Street. Bernard McGuinness, who owned Carolan's wholesale and retail grocery business and the Market House, was the President that year.

I can also recall reading the proofs for catalogues of later years, with the help of Ethna McGahon, who was a clerk in the Democrat offices and was also an exhibitor of baking and other domestic economy entries which won many prizes over a period of about thirty years.

I was a little surprised to come across my own name in the Garden Produce entries for the 1947 Show in the 'Three Parsnips' class. I do not know if I won a prize that year but I did win a few firsts and other prizes for my carrots and parsnips entries on a number of occasions. I note that I was up against no less a competitor than Benjamin Rawson, the owner of the local footwear factory, in those Garden Produce classes! I can remember with pride the little red car that used to be placed by the judges on the winning entries when the Show Hall was opened to the public. It was not just that honour but the fact that there was five shilling first prize and that was a considerable amount to primary school lad in those times. Incidentally, the price of the Catalogue that year was one shilling, the equivalent of about six cents in Euro currency!

To tell the truth, however, I would not have won those prizes without the assistance of my father Ned Kavanagh, who came of farming stock and was a prolific grower of all sorts of foodstuffs during the Wartime Emergency!

Readers may recall the crowds that used flock to the Athletic Grounds for the two days of the Annual Show in September but may will also remember that the peak of the attendance at the Show did not happen until it was moved to the Marist Grounds and held on August 15 in the 1960s. An entry in the Democrat of fifty years ago, in August 1966, states – 'The first day of Dundalk's two-day Agricultural Show in the Marist Grounds attracted as many people as on the two days of the previous year'.

Perhaps this was because the St. Mary's College yards were a much larger space for the exhibition of agricultural machinery and other local products stands than had been available at the old Athletic Grounds on the Ramparts!

Incidentally, that year 1966, the hard working Secretary of Show was another journalist who was employed by the Dundalk Democrat, Kevin Mulligan from Demesne Terrace. Kevin was later to become a distinguished Editor of the both Drogheda Independent, and afterwards, the Argus, local newspapers.