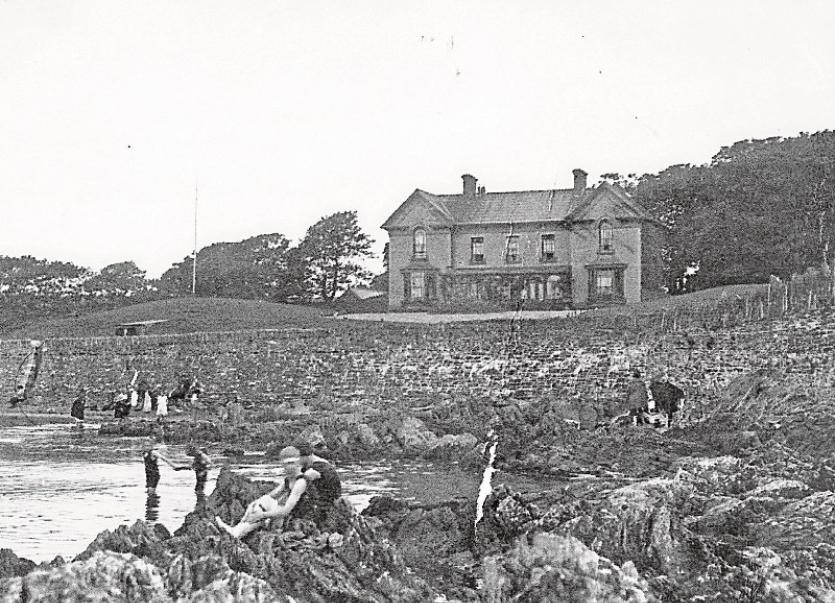 I have had a number of queries about the Alexander Sheckleton whom I mentioned in my Question Time notes last week about the place known as 'Sheckleton's Strand' at Blackrock.

He was a prominent merchant in Dundalk in the early part of the 19th century and established the Iron Works at the Market Square in 1821 which became more famous in the latter part of the same century when it was purchased Edward Manisty.

Noel Sharkey of Blackrock has sent me an interesting piece about Sandymount House at Blackrock, which he states was built around 1830 and was formerly the residence of the Sheckleton family. This, presumably, relates to the same Alexander Sheckleton who built the Iron Works at the Square.

Alexander seems to have been very influential in the establishment of the railway system in the Dundalk area and was the Secretary of the first railway company which was formed in the town in 1836 called the Dundalk Western Railway company. According to the Dundalk Almanack, published by Edward B. Cooper in 1837, the aims of this company was 'To connect the Western and North Western Counties of Ireland with the Port of Dundalk'. A Private Bill for the formation of this railway company was lodged in the House of Commons in March 1837, with a capital of £330,000. Alexander Sheckleton held 20 shares in the company, valued at £1,000, which was a considerable amount of money 180 years ago. Sir John Macneil of Mountpleasent held 50 shares, worth £2,500, one of the largest holdings, and was appointed Engineer for the project.

Unfortunately, Alexander died on June 8, 1845, just a few months before the 3rd Earl of Roden cut the first sod for the railway in October 1845 and thus never lived to seen his ambition fulfilled. At that point the name had been changed to the Dundalk and Enniskllen Railway Company and the first train ran to Castleblayney in February 1849. Sheckelton's brother George held just two shares in the original company and, in that same year 1845, sold his grocery business at 24/25 Clanbrassil Street to Henry Backhouse who reconstructed the premises in 1868 and the firm went on to become one of the leading grocery and pharmaceutical businesses in the area.

Alexander Sheckleton and his family are commemorated both on a tombstone in the cemetery at St. Nicholas Green Church and on a marble plaque in the church. This shows that he was born on July 1, 1786 at Pepperstown, Ardee. His eldest son James was born in 1821, the year the Iron Works was established. Like his father James was also an enterprising engineer and continued on the business after his father’s death. The Foundry was sold to Edward Manisty, who had come from England to help build the railway from Dundalk to Greenore and construct the harbour there in about 1870. Manisty was one of the most enterprising developers in Dundalk of the pre-Great War period and was involved, as well as with the railway system, in ship building, brick manufacture and the industrial agricultural machinery.

Sandymount House built by Alexander Sheckleton on a promontory jutting out from the Square at Blackrock into Dundalk Bay is still one of the finest old residences in the Blackrock area. Noel Sharkey says that it was built around 1830 and purchased by the Moynagh family 'who made their fortune in Chile (in cotton apparently) before coming to Blackrock'. Noel does not say when the purchase was made from the Sheckletons but it must have been sometime before 1870 as the house is mentioned in Bassett's Guide to Louth, as being the residence of Mr. M.C. Moynagh, solicitor. The Guide gives his office as being at Francis Street but Tempest Annual for 1896 says that he had been in practice since 1870 and gives his address as Roden Place, where he may have had a town residence.

Noel goes on to say that 'The family kept four house servants, two coachmen, three gardeners and a governess for their private school. The Moynagh family had strong Imperialistic leanings and flew a Union Jack in their gardens. Mrs. Margaret Moynagh's son, Captain Gerald Moynagh, was killed in Flanders (serving at the Front during the Great War) in 1915 and is commemorated by a brass plaque in St. Paul's Church, Haggardstown. Mrs. Moynagh died in July 1940, aged 89 years.'

The house was subsequently sold to the Cox family, local racehorse owners and trainers.