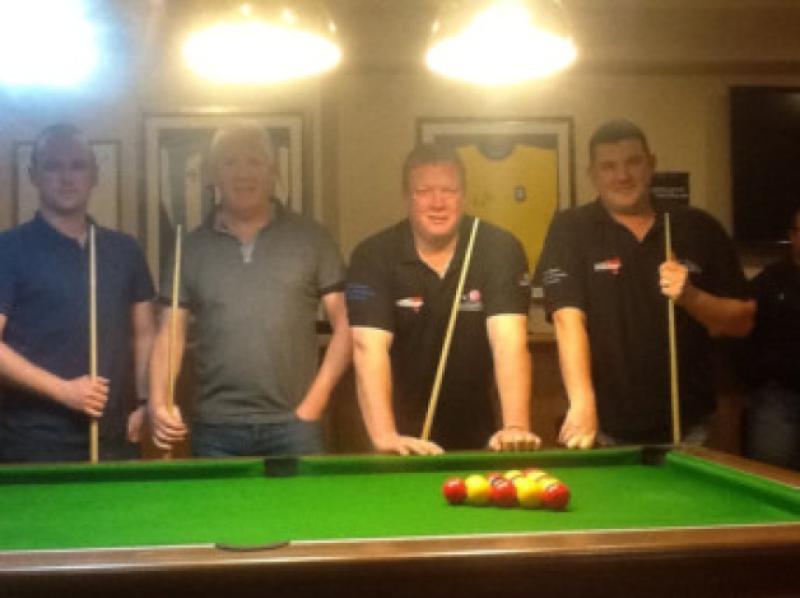 Last week’s action in the Tuborg Dundalk Pool league centred on the doubles competition, as players battled for a place in the semi finals.

Last week’s action in the Tuborg Dundalk Pool league centred on the doubles competition, as players battled for a place in the semi finals.

Played in the Avenue Inn, the home pairing of Wayne Rogers and Jimmy Reenan qualified for the semi-finals when they defeated the Castle Bar duo of Tiernan Mallon and Liam Johnston 3-1. The match should have gone to a deciding frame as Tiernan missed an easy long pot on the black in frame four to level the match. Also in the Avenue, another home pairing, Jonathan Murray and Ciaran McGuinness won their first match 3-1 when they defeated Kevin Soraghan and Martin Lambe from Jackie Murphy’s.

Jonathan and Ciaran then played last years runners-up Pat Brady and Stephen Gorham and it was Pat and Stephen who advanced to the semi-finals with a 3-0 victory.

Played in the Castle Bar, the Harrison’s duo Gerry Reenan and Paul Kearney advanced to the semi-finals when they defeated the Sean’s Tavern pairing of Don O’Brien and Martin Hayes. Gerry and Paul led 2-0 only for their opponents to bounce back and win the next two frames to level the match.

The deciding frame went down to a black ball fight and it was the Harrison’s captain Gerry Reenan who held his nerve to pot the black, to complete a 3-2 victory.

Also in the Castle Bar, the home pairing of David and Bryan Crowe played some excellent pool to defeat the Sportsman’s duo, Barry Keane and Ted McArdle 3-1.

This left the quarter final between the Crowe brothers and the Windmill pairing of Tony Bellew and Victor Murray. This match went the full distance with the experienced duo from the Windmill eventually winning 3-2 to book their place in the semi finals.

In the Shield competition, the Lumper’s recovered from last week’s poor performance to book their place in the quarter-finals when they defeated Castle Bar Baize 4-1.

The outstanding cup quarter-final featured an Avenue Inn derby between Eagles and Swifts and it was the Eagles who advanced to the semi finals with a 5-0 victory.