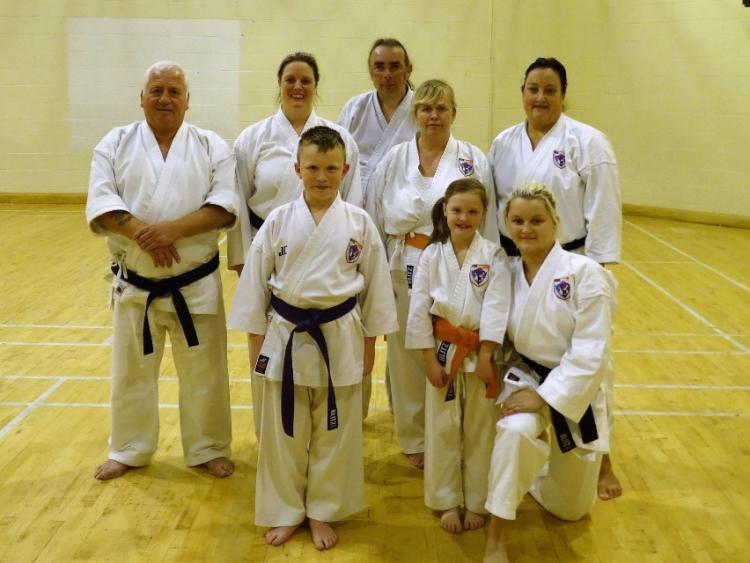 With members getting back into a routine of the school term, homework, after school activities etc., Head of Dundalk Karate, Sensei Mary Marcus 2nd Dan thought it was about time that she spiced things up for all members of Dundalk Karate, and Sensei Fran Nangle 7th Dan, Head of the Irish National Wado-Kai Federation was the answer.

Having visited the Dundalk Dojo in the Redeemer Family Resource Centre previously, it was fantastic to see Sensei Nangle in residence for a return visit.

Once everyone was lined up and bowed in at the start of class, Sensei Nangle - after a quick introduction - quickly got everyone warmed up and straight into basics followed by combinations, and with a mix of the odd, but fun exercise during class, everyone was kept on their toes.

Higher Grades didn't escape Nangle's watchful eye, as he called a select few to perform Kata (form) either individually or in pairs and with fellow members watching, nobody was taking their eyes of what was taking place.

Following the main class, Nangle stayed on to further instruct all Cadet and Sensei Members, along with a few invited higher grade Junior Members, and with numerous advanced basics and higher Katas covered everyone was thoroughly delighted with everything that was accomplished during the class.

"Everyone was eager to start class after seeing a little taster of what Catherine and myself were put through, and Sensei Nangle did not disappoint. Members as young as four-years of age, up to our Senior Members, and with some Senior Members having sons or daughters as members, everyone enjoyed Sensei Nangle's instruction."

Dundalk Karate currently train in the Redeemer Family Resource Centre, Dundalk every Monday and Thursday from 7pm to 8pm and they have also introduced an All Inclusive Karate Class every Tuesday from 6:30pm to 7:30pm which is aimed at anyone who requires any additional needs.

If you would like any further information on Dundalk Karate you can either pop along to one of these classes or you can contact Sensei Mary Marcus 2nd Dan on 086 353 1625 or karatequeen@live.com