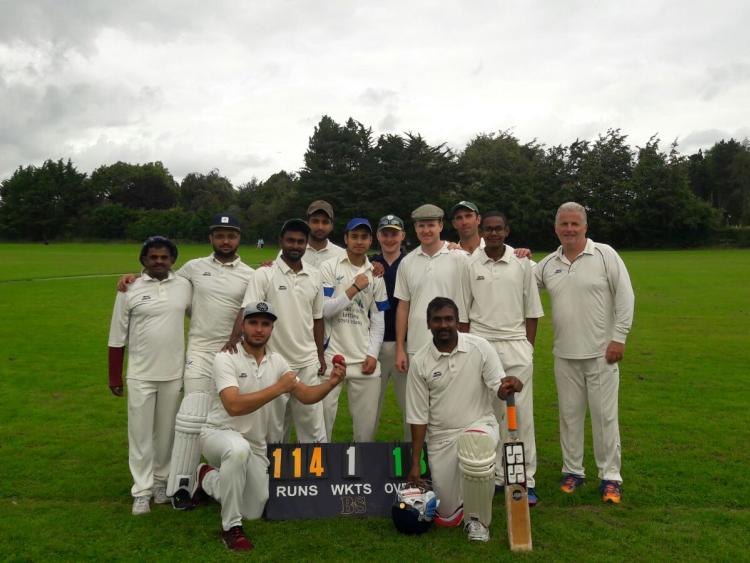 On wet and windy Saturday afternoon, Dundalk took on Castleknock in a must-win game in the race for the league title. After a slip up last week against Adamstown, Dundalk knew that nothing less than a big victory would suffice in order to keep the pressure up on league leaders Greystones. They delivered such with a fine display with bat and ball.

Castleknock’s captain won the toss and made the surprising choice to bat first in the conditions, and was put to the sword by Dundalk captain Andy Williams, who took the two cheap wickets of the opening batsmen. Muhammed Zahid and Waqas Khan picked up wickets too, before Castleknock batsman Ali Ahmed offered any resistance. His survived a number of half-chances before the calm, consistent bowling of Abdul Moeed removed him for 35. After that, the West Dublin outfit started struggling, scoring boundaries but losing wickets in quick succession, including one to a magnificent Andy Williams catch, who leapt like a salmon to remove Pradeep Singh. Williams then rounded off the last of the Castleknock tail end, which left a target of 157 for Dundalk to chase, and himself with figures of 4-12 from his 7 overs.

Dundalk’s tried and trusted partnership of Muhammed Zahid and Waqas Khan opened the batting for them, with the pair taking it in turns to smash boundaries through the hapless Castleknock field. Khan raced away ahead of his partner, striking of a pair of huge sixes straight down the ground in one over to complete his half-century. At the halfway mark, Dundalk were well ahead of the run-rate on 100 but suffered a setback as the opening pair were dismissed by Murali Boda in the same over. Castleknock sensed they may have found a way back in the match but new batsmen Sajan Jayaseelan and Regin Samuel dismissed those ideas, with the pair playing relaxed and sensibly before unleashing in the last few overs to take the game home for Dundalk, by a comfortable margin of 8 wickets.

In the mean time, Adamstown, who upset Dundalk’s unbeaten run last week, continued their fine run of form by beating league leaders Greystones by 6 wickets. This means that Dundalk’s fate is in their own hands and next week’s game in Greystones will be a winner-takes-all match to decide the league winners.

The last game of Dundalk’s season will be a friendly game against Cavan County Cricket Club in the club’s pitch in Dromiskin on Saturday 23rd September. All are welcome to attend, for more information visit www.dundalkcricketclub.com, find us on Facebook, or email club Secretary Derek Turner at derek@spiritstore.ie.