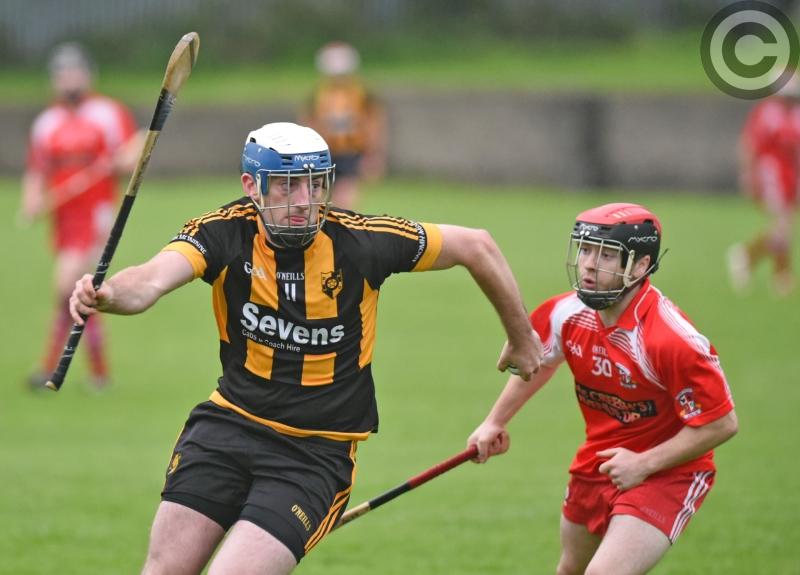 Naomh Moninne progressed to the Louth Senior Hurling Championship final for the first time since 2010 with a single-point victory over Knockbridge in Dowdallshill on Thursday night.

There may have been only the minimum between the sides at the close of play, but Moninne were full value for their third win in as many weeks; one which ends the competition's longest final drought.

The Septemer 24th showpiece will be only Moninne’s second showpiece appearance since 2004. And while there have been league and subsidiary competition finals in the meantime, the Black and Amber have perennially struggled to cope when championship challenges arise.

History looked to be repeating itself here as Knockbridge battled their way back from five-points in arrears to trail by the slenderest margin on three occasions during the closing 15 minutes.

The scores dried up for Brian Brady’s men as the Knockbridge defenders got to grips with Moninne’s physically superior attackers, while Shane Fennell – the scorer of 10 points – made significant inroads at the opposite end.

Stephen Kettle and Brian Buckley were superb in the Reds defence, though they were matched and more by Moninne’s central defensive duo of Chris Lennon and particularly Óisín Drumm.

Drumm was a colossus at centre-half, pulling off three heroic catches in the closing stages and keeping a calm head to find a team mate on each occasion.

With the ‘Bridge raining high deliveries deep into enemy territory, Drumm showed exemplary composure in fetching among a sea of bodies before picking out Diarmuid Murphy in space. And the veteran drew a spine-tingling reaction from the Moninne dugout as he turned to fire over the point of the contest from the halfway line as the game entered the second minute of stoppage time.

The point proved decisive with Trevor Hilliard’s team able to pull only one back in response, from a Fennell free.

A draw would have sufficed for Monnine to take their place in the final, courtesy of their superior scoring record. Though, on the basis of play, anything bar victory would have served Moninne an injustice.

Ronan Geoghegan set them on their way with a wonderful point from an acute angle in the third minute. Moninne’s dead-ball specialist, Geoghegan, was unerring throughout, hitting the target a further six times before the break, all from frees, as the Black and Amber went to the interval 0-9 to 0-7 ahead.

Fennell was responsible for four of Knockbridge’s first-half points, one of which came from play, while Gareth Hall and David Kettle pointed from play. But a tally of eight first-half wides proved excessive for the 'Bridge, who trailed indefinitely from the 24th minute.

Moninne started the second-half well with Feidhelm Joyce, John Martin and Murphy striking points. They merited their five-point lead and it would have been more had they continued their ruthless streak, but instead they began to retreat, allowing Knockbridge an avenue back.

Half-time substitute Ciarán Deane pointed well in between minors from Fennell (4) and Seán Marry as the gap was curtailed to one with eight-minutes to play.

Several skirmishes broke out on the home straight before Murphy landed a beauty and, while Fennell drove a free over in the dying embers, it proved the difference with Moninne leaving St. Fechin’s and Knockbridge – last year’s final pairing – to battle it out in a semi-final.

Whereas Moninne can start their preparations for an assault on a 21st Paddy Kelly Cup.