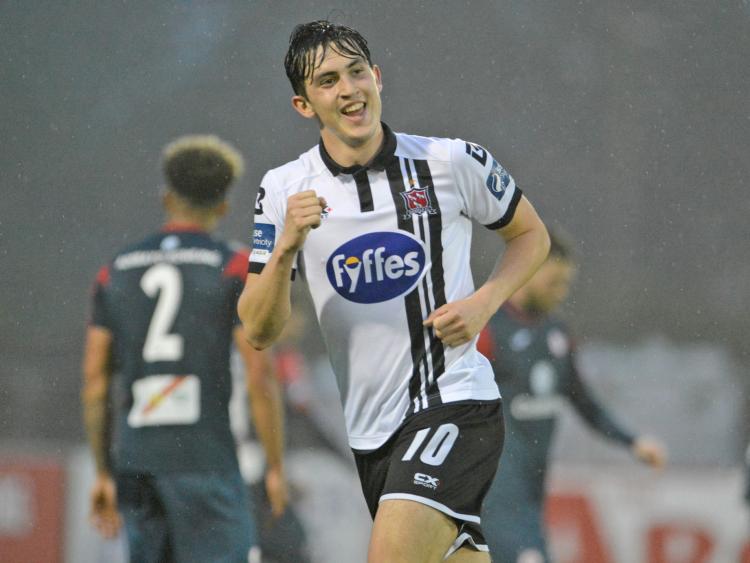 Sligo Rovers may not even have been the toughest examination Dundalk hat-trick hero Jamie McGrath faced last Friday.

Fresh from an exam earlier in the day at NUI Maynooth, the second-half performance of the tricky winger typified that of the Lilywhites in general.

“After scoring the first goal I was full of confidence and I just wanted to keep on shooting,” McGrath said.

“It was important to bounce back because two losses are never ideal especially when you’re pushing at the higher end of the table.

“But, we knew this performance was coming because we had a good weeks’ training under our belts where we worked hard.

“We work hard every week though and it really showed dividends tonight.”

'54: @DundalkFC 1-0 @sligorovers. Jamie McGrath gets in behind and makes no mistake to raise the Oriel Park roof

The winger, as shy and humble as he is deadly in front of goal, was also keen to lavish praise in the general team performance after a few sticky weeks and even a tough first-half on Friday night.

“It was a team performance tonight and everybody put in the same shift,” he added.

“There were a lot of match winners on the pitch tonight and everybody worked their socks off.

“Obviously, I got the goals and Nico (Niclas Vemmelund) as well but it was a team performance so we have to credit everyone.

“I know we didn’t really trouble them in the first-half but they never really looked threatening so we knew if we could grind them down we would get the goals to win the game.”

'72: @DundalkFC 2-0 @sligorovers. McGrath's second whistles under the body of Schlingermann to make it two and pretty for Dundalk.

McGrath’s hat-trick has the added significance of them being his first goals for Dundalk since he joined from St. Patrick’s Athletic in the off-season.

And the Meath man vividly recalled each of his three strikes.

“Fats (Patrick McEleney) was influential throughout the game tonight and he played a lovely ball onto my toe and luckily enough I got in one-on-one and shot in for the first,” McGrath explained.

“The ball just sat up lovely for me (second goal) and after scoring the first goal I was full of confidence and I just wanted to keep on shooting.

“The hat-trick was then in the back of my mind when we got the penalty.

“Killer (Ciaran Kilduff) is normally the man to put it away but he said ‘here you go, get you hat-trick’.

“It’s been a long day. I’m doing my college exams at the minute and I’d an exam this morning. So, this is a good way to top it off (with the match ball).