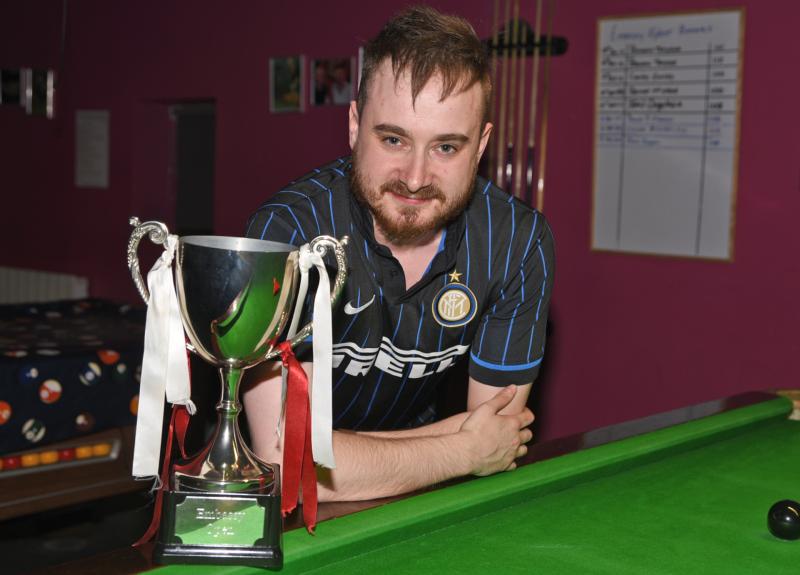 John Dugdale lifted the Embassy Open Snooker title for a second time with a five-frames to three victory over defending champion David J. McArdle in the Embassy Snooker Club.

Tied at 3-3 at the end of the sixth frame, Dugdale capitalised on a missed blue from McArdle to clear the table in what turned out to be the most intriguing and equally decisive frame of the match.

And Dugdale took the title a frame later with a break of 27, sealing a fourth consecutive frame, preventing McArdle from a third title in a row in the process.

Dugdale had accounted for last year’s finalist Dominic O’Connor in the semi-final and prior to the start of the match, the pair played a practice frame which saw Dugdale put away a break of 108.

The signs looked ominous from that point onwards as he carried his good practice form into the opening frame, taking it with a break of 33.

McArdle hit back in the second and levelled the game at one-frame apiece at the end of a scrappy sequence of play by potting the pink.

The third saw the holder take the lead for the first time in the match, in a frame which saw him hit a break of 48.

He went 3-1 ahead at the end of the fourth following some great safety play and a ruthlessness in clearing up when he got the chance.

That was to be the end for McArdle in terms of accruing frames though as Dugdale won the next four without reply.

The winner cut his deficit to the minimum, in terms of frames, in the fifth. After a spell of safety play, McArdle was first to get amongst the balls, however, in only making a break of 16 he allowed Dugdale to pull away, which he did with 40 straight points.

Dugdale drew proceedings level in the sixth, with a break of 32 key.

The seventh frame proved to be the most controversial. After McArdle had snookered his opponent behind the brown, with 10 reds still on the table, it took Dugdale six attempts to get out of trouble, by which point he was 20-points in arears.

However, he regained his composure and a break of 46 got him in front before McArdle missed a long, straight blue which allowed Dugdale to finish the frame.

And his break in the eighth saw him take the title with his clearance of the blue and pink seeing him crowned champion for the first time since 2013, when he also accounted for McArdle.

To make the night even more memorable, Dugdale’s break of 76 in is quarter-final win over James Dullaghan was announced as the highest break of the tournament.

The tournament organisers also extended a thanks to competition sponsors; Tony’s Pizzeria and The Bouncy Castle Company.