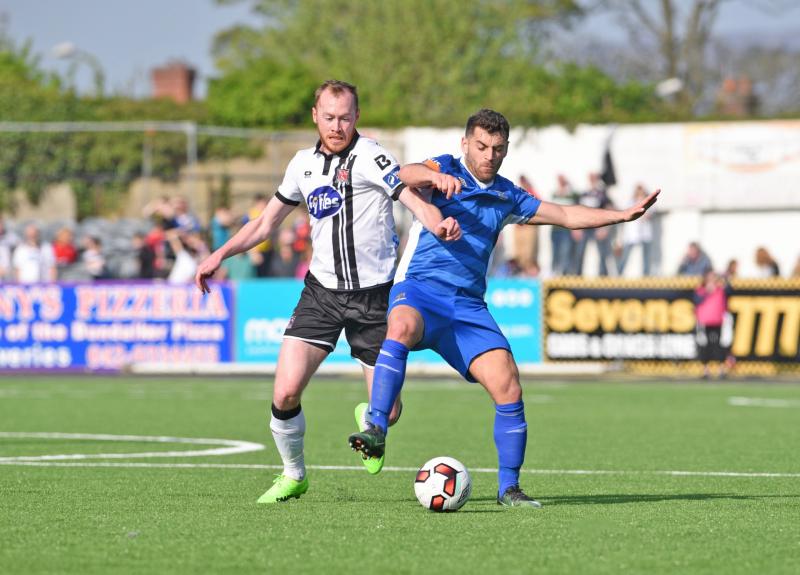 Ciaran Kilduff, Thomas Stewart and Conor Clifford were the goalscorers as Stephen Kenny's men put Friday night's loss in Galway behind them to comfortably progress past the First Division high-flyers

The opening-half was an even, if disappointing, affair with neither able to truly test the opposition's goalkeeper. Dundalk were in the ascendancy but, such is their problem this season, they failed to penetrate in front of goal.

Several half-chances came and went for the Lilywhites, although Waterford's Derek Daly came closest to breaking the deadlock with a 20-yard free-kick which whistled past Gabriel Sava's right-hand post.

The hosts huffed going forward, but with a lack of puff, or invention, the Blues were comfortable. However, winger Steven Kinsella was looking very lively and it was he who almost broke the deadlock 10-minutes before the break. Having feinted inside with dazzling footwork, he played a neat one-two with Ciaran Kilduff but, under pressure, he toe-poked the ball outside the post.

'34: @DundalkFC 0-0 @WaterfordFCie. Magic feet and run from Kinsella, linking with Kilduff, before toe-poking narrowly off target.

John Mountney had another effort before the break, which Matthew Connor did well to top over, as did Clifford whose effort flew marginally wide.

0-0 at the interval, almost turned into 1-0 to the visitors within a minute of the restart when Jack Lynch let fly and with Sava rooted, it went narrowly past the upright.

Thomas Stewart then spurned a clear opening after Connor had fumbled a cross under pressure from Kilduff before the latter put Dundalk in front with his sixth goal of the season, nodding home Kinsella's pinpoint cross.

By this point, the Lilywhites had upped their levels of intensity visibly with Dane Massey coming close having persevered along the byline prior to cutting in and drawing an excellent stop from the visiting 'keeper.

The Blues responded by introducing former Cork striker Mark O'Sullivan, although it was Dundalk's frontmen who were getting the service and when Kilduff flicked a Kinsella delivery back across goal Stewart was on hand to make it two-nil on 72-minutes.

And it was three seven-minutes later when Clifford rocketed an effort to the top-corner from the edge of the area, despite a mass of Waterford defenders being positioned across the 18-yard line. Such was the venom of Clifford's effort that Connor never stood a chance of deflecting it to safety.

There were nervous moments for the Lilywhites before the finish, particularly when Sava was called into action to tip-over a wicked Tom Smith shot before badly misjudging the flight of the resultant corner.

Dundalk's supremacy was never in question though as they deservedly secured their place in the penultimate stage of the League Cup.