Reds aiming for a 'minor' scalp

Wayne Kierans takes his side to Portlaoise this weekend. 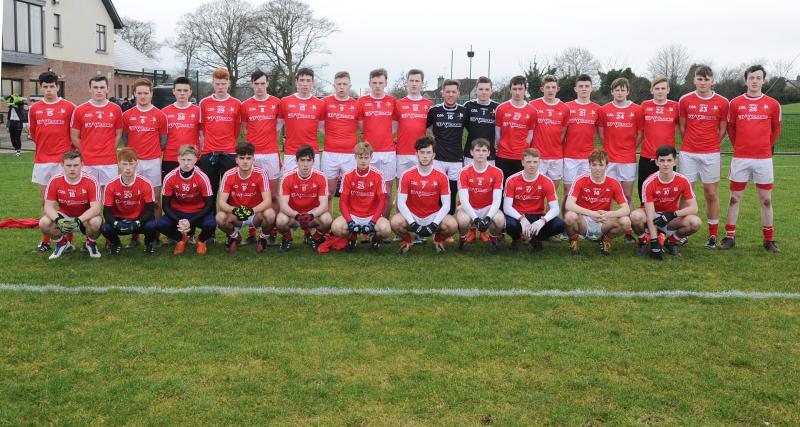 The Louth minor footballers begin their Leinster Championship campaign in the midlands on Saturday when they face off with Laois.

Louth’s u18s endured a testing Leinster league campaign, losing to Kildare, Westmeath and Meath, but manager Wayne Kierans told The Dundalk Democrat that he learned a lot about his team in those outings – despite the disappointing results.

“The results were not great, but I thought in instances of each game, particularly the first two games versus Kildare and Westmeath, we played very well.”

He continued: “Unfortunately, it was only small in instances though and overall we didn't put it all together.

“We've been working on those areas now in the past number of weeks and we've a settled situation regarding the squad and the team.

“We have learned a lot from it.”

The intervening period since exiting the league has served his side well too, admits Kierans, who is now in his second season at the helm.

"Preparations have gone well, we had a good victory last week against Armagh in a challenge and we'd be a lot further on from our Leinster league campaign too, so that’s also good.

“We have a full squad to pick from this weekend with no injuries, apart from a couple of very minor knocks but they'll all be okay,” said Kierans.

Revenge could well be on the agenda this weekend with last year’s minor crop having exited the championship to the O’Moore men.

"We know that Laois have more of a carry-over (than us) from the team that we played last year when they beat us by a point.

“We also know that their results haven't been fantastic either in the Leinster league. So, we do know a wee bit about them and we are also due a win against them because between 21's and minors last year and 21's this year.

“They've been beating us a lot and we don't want that to continue.”

Ultimately, Kierans’ brief is to nurse some of the county’s budding talent and help them develop into players capable of representing Louth at senior level in the years ahead.

And the former Naomh Fionnbarra manager has highlighted one of his current minor crop to get particularly excited over.

“There would be a couple of players without doubt (that could make the step up,” he said.

“We had two last year that went straight into the senior panel, Ross Nally and Sam Mulroy, which was absolutely very deserving. They’re two gems of players.

“Our captain this year, who is the one guy that's carried over from last year, Eoghan Callaghan from the Máirtíns, he's an absolute gem of a player.

“There are some other really talented guys as well and the u20 team next year will be very strong, put it like that."

“We're taking inspiration from the seniors full stop,” he added.

“They’ve done really, really well and their campaign was kicked off by that brilliant win in Portlaoise so yes, we'd take that same performance and result any day of the week."