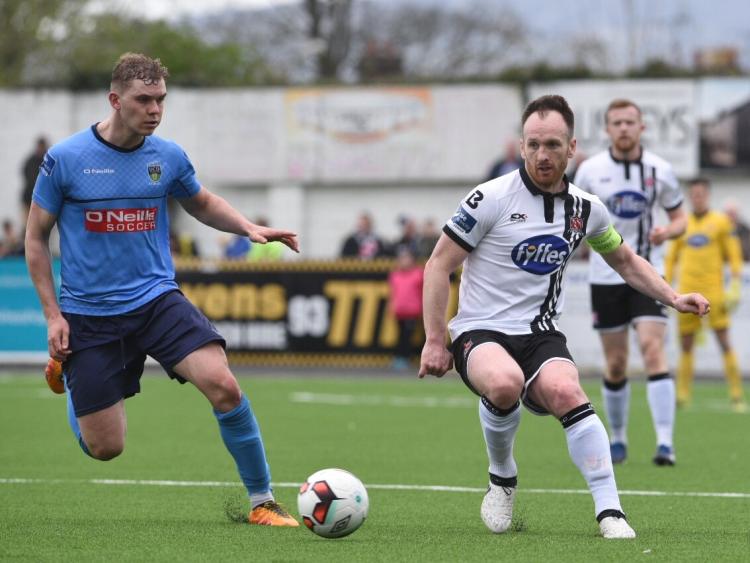 This evening's EA Sports Cup meeting with UCD went the full distance, giving the couple of hundred in attendance more than their money's worth in the end.

Although, there was a down sight for the Lilywhites with Paddy Barrett having left the pitch with a knock just past the hour-mark.

Gary O'Neill opened the scoring in the 17th minute before Conor Clifford scored his first goal for Dundalk with 14 minutes to play, sending the game to an extra half hour of play.

A period which yielded no more goals, before the home side ran out 6-5 winners on penalties.

It was a largely frustrating night for Dundalk in general, but particularly for Ciaran Kilduff who missed a host of glorious openings before seeing a second-half spot-kick saved. In the striker's case, it was certainly a night to forget.

Kenny made nine changes to his starting line-up with Seán Hoare and Clifford the only ones to have started both tonight's game and the defeat to Bray Wanderers on Friday night.

The visitors hit the front 17 minutes into the opening-half when skipper O'Neill guided Ben Hanrahan's lay-off past the hapless Sava. It was a wonderful strike with the instep of the UCD midfielder's foot, although it did come somewhat against the run of play.

Dundalk had begun the brighter with Kilduff missing several chances in front of goal, but the Lilywhites still went to the break one down. And it could have been worse had Sava not saved from an O'Neill free-kick later in the half.

Dane Massey and Jamie McGrath were introduced by Kenny at half-time and they seemed to help lift the intensity of Dundalk's play, although Kinsella remained the outstanding threat. Whether it be on his left-foot or right, down the outside or cutting inside, the winger had Seán Coyne walking a tight-rope throughout.

And it was the on-loan Everton man's brilliance which won the hosts a 65th minute penalty. The 18-year-old's genius turn and flick over Coyne saw him rampage into the area before Liam Scales bundled him over. A penalty was duly awarded amidst raucous cheers from the home crowd after Friday night's debacle.

Dundalk leveled on 76 minutes though as Clifford fired home a rocket from 20-yards after collecting Massey's quickly taken free-kick wide on the left.

And that was how it was to finish at the end of normal time despite the Lilywhites coming close on a couple of occasions, most notably when Stewart's overhead attempt was saved by Corbet from point blank range.

On to extra-time we went...

The first-half of which was a drab affair with neither team able to create clear-cut openings until Chris Shields saw a wicked effort deflected into the side-netting with eight-minutes on the clock.

Kilduff also tried his luck before the ends changed for a second time but he drove straight at Corbet having latched on to Kinsella's excellent through ball.

After the break, McGrath thought he had given Dundalk the lead when rifling a breaking-ball to the far corner of the net only for the linesman to raise his flag and rule it out.

Substitutes Mahdy and McGrath then spurned good openings before Maxi Kougan almost headed the ball through his own keeper's legs as Kilduff lurked menacingly.

Although, a shootout always looked the inevitable outcome.

And in that, Massey, Clifford, Shields, John Mountney and Stewart all found the net while O'Neill, Greg Sloggett, Scales, Georgie Kelly and Josh Collins made it 5-5, before McGrath scored his side's sixth while the unfortunate Mahdy didn't.