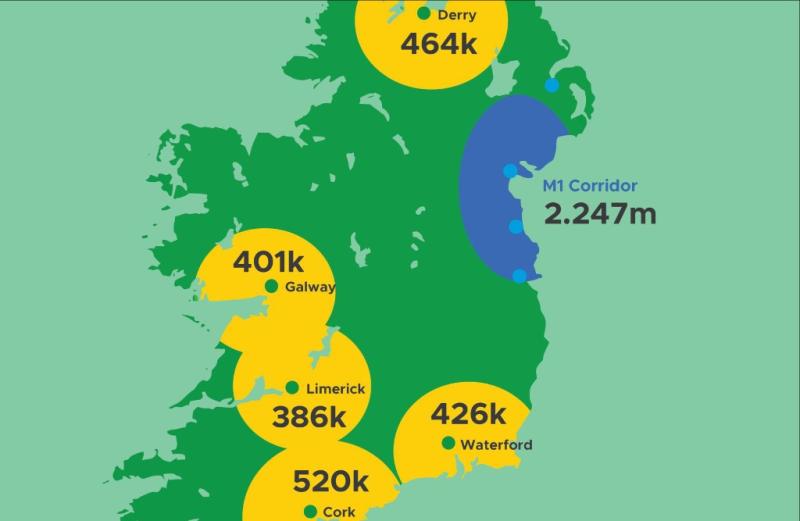 The standout nugget of gold - which was headlined and sold with complete conviction by Paddy Malone of Dundalk Chamber of Commerce and Louth County Councillor Colm Markey at a public meeting in the County Museum last week - is that within 60 minutes of Dundalk or Drogheda you have a population of 2.25m people.

This is important. Why? Because any IDA foreign and direct investment looks at a 60 minute commuteable radius for any potential region as a vital plus point in making a final decision on where to place themselves in the country.

Essentially, over one third of the population of this country is within a 60 minute drive of Dundalk. It's an impressive factoid.

The title of 'M1 Corridor', which is used to label this region, runs from the north of Dublin to the far side of Newry and includes everything in between along the motorway’s spine, including, of course, Dundalk and Drogheda.

The selling of the M1 Corridor as a key investment region in Ireland is so pertinent now, more than ever, due to the Government's Draft Regional Spatial and Economic Strategy.

In comparison to other regions vying for foreign investment, the figure of 2.25m people within 60 minutes commute easily compares favourably.

But, there are many other factors that large multinational companies, and the IDA, look to before concluding any deal.
Some of these relate to talent, connectivity, infrastructure and property, the area's 'start up' business scene, track record and also lifestyle.

So how does the M1 Corridor hold up in these particular areas?

Well, as we've said, with almost one third of the country population within 60 minutes, availability of talent is not a problem it would appear.

Connectivity includes vital internal and external transport solutions. There are three airports inside the M1 Corridor's radius - one in Dublin and two in Belfast. There's the motorway, of course, and several sea ports. Along with modern rail links up and down the coast.

Infrastructure is among the very best in the country and property, while always needing more, is still well up there in comparison. With Dundalk IT’s embryonic business hub one of the most successful in the country in producing successful start up businesses, that's another box ticked.

Track record in IDA business stretches back a long time too and has been a key employment driver in the region for years now.

Finally, there's lifestyle - what is there for workers to do outside work hours in the area? Sure there may not be the buzz and glamour of a large city centre within the radius, but the reality is that most workers, especially those with young families, would be more than content to enjoy the lack of urban congestion and the stunning access to a rich and varied coastline boasting three of the country's largest towns - Dundalk, Drogheda and Newry.

The M1 Corridor labels itself as being 'investment ready', there's no doubt that everyone living in the region hopes that this is clearly understood and heavily sold to any interested multinational companies. A very bright future for the North East is possible if this gets off the ground.