Memories of a time when a hard border dominated our landscape 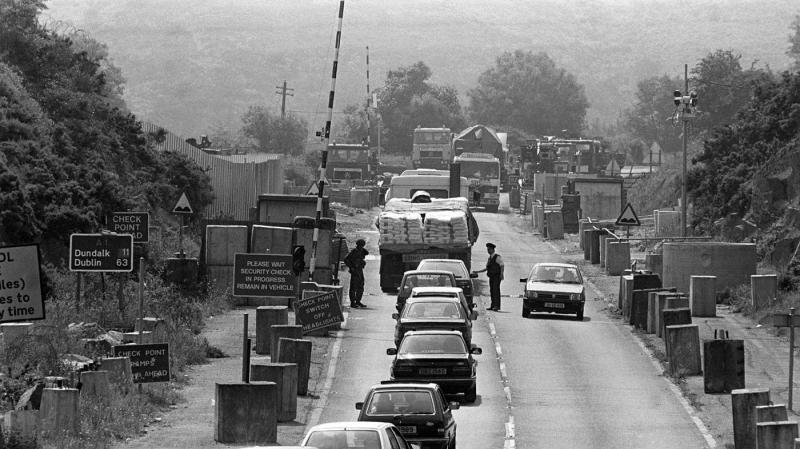 Memories of a time when a hard border dominated our landscape

“As the Brexit deadline looms, we urgently need to send a very clear, very loud and unequivocal message to the British and Irish Governments and indeed the European Union, that the people who live along the border are not going back to the past.”
- Declan Fearon, Border Communities Against Brexit, January 17, 2019

From my own young and innocent memory, the drive "down to Newry" in the late 1980s and early 1990s never seemed like a particularly fraught occasion.

Sure you had to navigate through the British army checkpoint, but for a young lad - who was heavily interested in all things military - it was a chance to inspect the ‘cool’ weaponry and vehicles on display up close and personal.

The soldiers never appeared overtly threatening from memory either - bar the bristling assault rifles and armoured Land Rovers, of course. In fact, most, if not all of the time, they simply waved my dad's car through the checkpoint. It never seemed like a 'Midnight Express running for the plane-type' sweat-fest.

It was normal. It was wrong.

Say this to someone from down the country and they'll look at you like you're a Vietnam vet with a thousand yard stare. It was a part of our childhood. Despite our close proximity to the border and the enormity of the violence which permeated through Northern Ireland then, we were sheltered from the worst of it, but also witnessed its far-reaching impact from just outside those ‘border walls’.

Partition of any sort is never a favourable or preferred outcome in any territorial impasse. And now 25 years later, the possibility of a return to such border constraints appears increasingly more likely, should a deal not be agreed regarding Britain's exit from the EU.

What is it with this subconscious hurtling towards such a return of a hard border and the very real potential for renewed political/sectarian violence?

The political figures involved in Brexit in the UK and Northern Ireland should have a keen understanding and vivid memories of the Troubles a generation ago.

The copper-fastening of a continued peace on this island should be the primary concern in any Brexit talks.
There is a growing, and very real fear, that the return of a hard border could ignite violence around the border and into the heart of Northern Ireland. This simply cannot be allowed to happen. The UK voted for Brexit in 2016. We're nearly three years down the line now. Things have changed. Opinions have changed. People have changed. This rapidly unfolding nightmare, which started as a laughable political sideshow, has grown into an unpredictable beast capable of destroying lives if allowed to propagate unchecked.

That may seem OTT, but surely it should be the right mindset to use in approaching anything that comes next in this debacle.

While the growing possibility of a second referendum has been flung about for a number of months now, Northern Ireland will be the only region on the frontline of any possible border with the EU.

Northern Ireland voted to remain in the European Union in 2016. But it is Northern Ireland that will assume most of the known and unknown future risks should Brexit actually occur.

That doesn't seem right and it certainly doesn't sound just, but that's the situation as it stands; right now anyway.