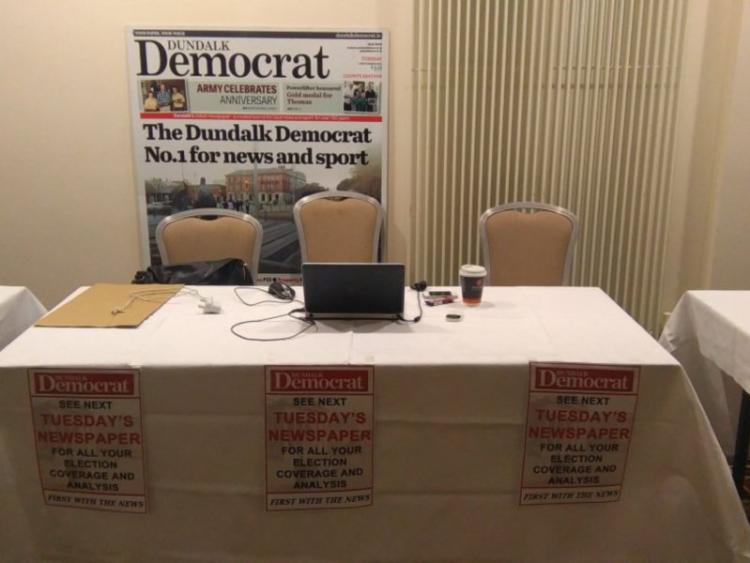 But you can never leave!"

Saturday last dawned with the air of expectation and the knowledge that the next 48 hours would either galvanise the country or launch it into further dismay and confusion (clue, it's not the first part of that sentence).

From a personal point of view it meant taking up residence in the Ramada Hotel out the Armagh Road for an indefinite period of confinement.

First thing first about election counts - there's a lot of waiting. A lot. It's the kind of waiting were you end up eating more junk food than is healthy and you become particularly good friends with the barmen and the hotel staff.

Add to that, you also get to chat idlly with the local gardai in a situation which is removed from the usual tense encounters with such law enforcement personel.

The Democrat team set up base camp in the media centre in the hotel at 9.30am. Across the way the local radio stations were already practicing their vocals for a testing couple of days. The great and good of Irish media made an appearance.

Samantha Libreri and Richard Dowling from RTE looked the part in their Donnybrook wardrobe. Yours truly had to make do with an itchy Penneys jumper and accompanying slacks.

Inside the 'counters' were corralled and penned-in like zoo animals while the rest of us swarmed around, ogling them as they went about their monotonous, yet vital task. No conversation or feeding, please.

Back to the media centre. The tallies were starting to roll in and very quickly we had an idea how the election was going to pan out here - all we had to do now was wait to have it officially confirmed.

Lunch at these things consists of a sandwich of dubious quality at best and a Twix. Samantha and Richard had grander munch - a chinese takeaway. We watched in awe at the way they divided up the food - prawn crackers, oceans of curry and fried rice. I Mopped up the drool and went back to my sandwich.

Plug points were something to be coveted and guarded for dear life. We had four and could have sub-let two out for a reasonable return given the demand - in the end we just shared them over the course of the weekend.

Count 1 came and went, as did a few more and then a few more after that. Saturday drew on and the eyes started to narrow a bit. The smokers outside the reception of the hotel put paid to any notion of grabbing some fresh air. A stroll about the car park was a better option. On Sunday the Sinn Fein folk had commandeered a picnic table outside and Gerry and the crew tucked into some fizzy pop and hang sangwiches - lucky divils.

The entry system into the count centre was intense. Every time you left you got a white, stamped card which allowed to you to gain re-entry upon your return. By Sunday evening I had enough for a full playing deck littered amongst my many pockets.

Saturday came and went with nobody getting the nod or being hoisted atop shoulders. Twitter and Facebook were the communication media for ourselves throughout this fallow period. However, when little is happening, there's little to put up onto the cybersphere. The mind gets creative and the fingers get loose.

The mature gentleman with the Baileys on ice, who drifted around for the two days, should get special mention. He seemed to come and go whenever the mood took him, but the glass always remained.

By Sunday evening the light had gone out of the eyes of most journalists. The thousand yard Vietnam-stare took hold and any mention of the word 'recount' was met with open hostility accompanied with the threat of imminent violence.

As it turned out Fitzer and O'Dowd scraped through and by 7.30pm we were marching out into the cold evening and hoping - nay praying - that the recently elected would be able to form a functioning government. If for no other reason than to spare us having to return here in a few months time.