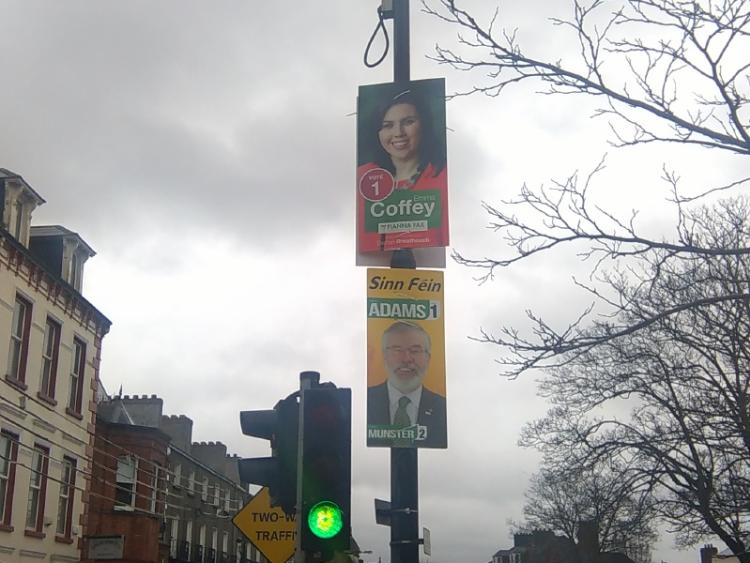 Wednesday. 11.05am. The first poster appears on the pole outside the Democrat office. Gerry Adams' face beaming out at St Patrick's cathedral. It's definitely on now, so it is. The race to the tippy-top of the poles/polls begins.

The Dail has been dissolved - which sounds quite serious and sort of like a national emergency, but just meant all the TDs ran back to the countryside to line the pockets of their local printers.

There's another man walking across Roden Place with a painter's stepladder under his oxter - no expense spared here. The boot of his car springs open and it's lined with a veritable Aladdin's cave of election posters. How will he ever fit the weekly shop in there now? Says you.

The Twitter hastag #GE16 is trending the length and breadth of the digital country. Pictures of far flung, and closer to home, local councillors lending a hand on the poster trail clog-up the newsfeed. Pictures of people holding pictures of people. This truly is the end of days.

The banter is 'hilarious' online too. Lots of inter-party rib-tickling and gaw-fawing - it's like Christmas and end of term rolled into one for these folk. Running the country goes on hold. Naturally.

Across at the courthouse on Earl Street, the tracksuit brigade pull on their fags and shrug, perhaps they know something we don't? Perhaps not.

It's quiet. Do people know there's a general election campaign just beginning?! Does anybody, bar the media and the politicos, even care? Perhaps not.

It's technically a short campaign in comparison with previous ones, but already there's a feeling that it's about to pull a hammy at any moment.

By Thursday morning Emma Coffey was above Gerry on the pole - a bigger step-ladder from Fianna Fail. Clever stuff there.

Then Joan Burton swept into town for a look. She spoke to local radio about Labour's 'tough contest for its seats.' There's seven days in a week apparently.

The word 'recovery' has been prominent on the campaign trail the past few days. Now in my mind 'recovery' usually refers to finding the remains of wreckage after a plane crash, as in - 'a search and recovery operation'. It's not the kind of word to generate much confidence after our own 'crash'. Perhaps they could use an anglicised composite - maybe re-nua? Oh wait.

This is going to be Ireland's first real social media general election. 2011 was a toe in the water, but 2016 is shaping up to be no holds barred online madness coming at you from all angles, at all hours. It's going to be a deluge of comment and counter-comment. In many ways this should be viewed as a positive. Everybody has a voice now and a chance to direct a question, in public, to a candidate. But I fear there'll be just too much clutter and white noise and some important messages will be lost along the way - both unintentionally and intentionally.

RTE's own online 'explainer' on the Louth constituency suggests we're in for a bit of a mixed bag come February 26. Sinn Fein could get two seats. Fine Gael could get two seats. Labour could get one. Fianna Fail could get one as well. Then there's a strong chance of an independent sneaking in. That's more than five seats surely? You'd swear these people were just making haphazard guesses about all this.

The Democrat's own team of reporters will be joining in the jamboree on the big day with live tweeting, twittering and smoke-signalling. We'll try to keep it interesting and thought provoking and there might even be the odd 'and-now-for-something-completely-different' moment or two, just for the sheer hell of it. So check in with us from February 26 -