CHELTENHAM TIPS FOR DAY 2 OF THE 2021 FESTIVAL 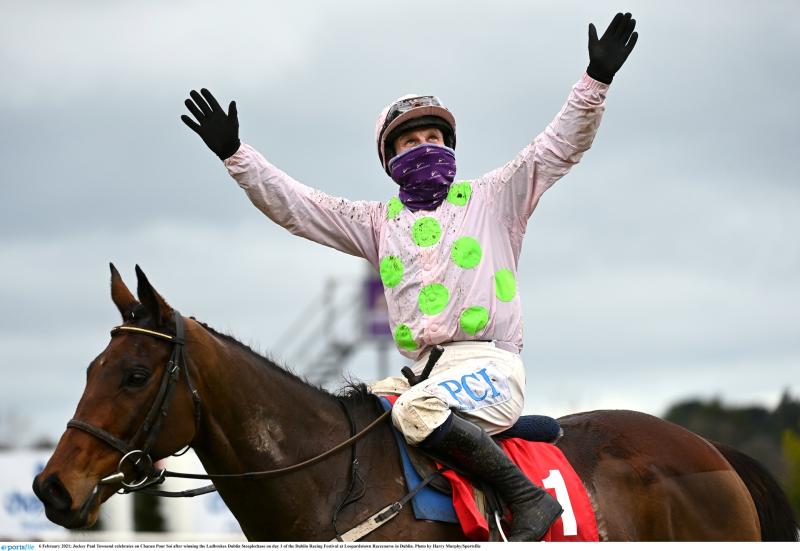 It is unusual for me but I'm going against the Irish in this race and backing BRAVEMANSGAME (7/2) trained by Paul Nicholls in England. On the Irish front, and we have a good record saddling four of the last five winners, Jamie Codd reckons Bob Olinger (2/1) is a "god given cert" to win this for Henry De Bromhead. He is a class act but I'm taken by Bravemansgame as what should be a good Cheltenham horse. He is a strong galloper and will relish the step up in trip.

He was beaten into second over two miles at Chepstow back in October when his jockey struggled to pull him up after the line. This trip is ideal and a strongly run race will be right up his street. You really couldn't find a more ideal race for him than the Ballymore. The further he goes, the better he gets, evidenced with his 10-length runaway win at Newbury last December. He could take the Irish raiders by surprise here. Nicholls is smitten with him and reckons he's his best chance of a winner this week. That says a lot from a brilliant handler.

It is a select field for this race this year with quite a few horses steered elsewhere to avoid a clash with MONKFISH (1/2). I think this horse is a monster for Willie Mullins and will win this easily barring disaster. The value is in choosing the horse to chase him home in the forecast. Despite being last in the market, I think Colin Tizzard's second string FIDDLERONTHEROOF (25/1) can chase home our favourite.

In the betting without Monkfish market, bookies will give you 10/1 for Fiddlerontheroof and I think that's the bet for me. That allows you to ignore whatever Monkfish does and focus on the scraps. The selection here is not ground dependent and actually ran well on heavy ground last time. He chased home Next Destination and proved he stays for sure. When the race gets going, and others falter behind Monkfish, this one will hopefully be still running on despite the massive price.

This is a very open race this year and I've gone through the weights and the runners from both sides of the Irish Sea and I'm going to stick with the top weight. THOMAS DARBY (14/1) is a very good horse and runs for owners who often seem to have a live one in the Coral Cup. They won it with Diamond King back in 2016 when he was trained by Gordon Elliott. Olly Murphy trains this one and he is the price he is because he's been saddled with 11st 12lbs.

He probably deserves that weight because he does have a touch of class about him. He was second behind Klassical Dream in the 2019 Supreme Novices hurdle at Cheltenham and won on his only other trip to the track back in October 2018. He finished a good third to the 2019 winner of this race, William Henry, back in February last year.

He finished third behind Summerville Boy at Aintree in November and claimed bronze again behind McFabulous at Kempton back in January. He's been laid out for this since and could still be ahead, if only slightly, of his mark. The drying ground and a strongly run race will suit him and he's a steal for an eachway bet at 14/1. I'd be surprised if he's outside the places.

The feature on Wednesday is the Queen Mother Champion Chase, a race the Irish have enjoyed success in over the years with the likes of Sizing Europe, Big Zeb and Special Tiara most recently. This year was due to pit stalwart Altior against Willie Mullins' latest machine, Chacun Pour Soi, who is odds on for the race.

That was before Altior's withdrawal and in truth, Chacun Pour Soi, had the form to beat him anyway. Altior had lost twice in recent times, somewhat diminishing his impenetrable reputation. It's not original to pick the favourite here but CHACUN POUR SOI (4/6) will win this barring disaster. He is as good a chaser as Willie Mullins has had in recent times, and he's had some good ones.

Chacun Por Soi showed his class in spades against a good field at the Dublin Racing Festival when he eased eight lengths clear of Fakier D'Oudaries. It will take something extraordinary to beat him and if there was a danger, it could be the teak-tough Politologue who won this race in 2020. The forecast might be a good option.

Easysland won this last year by 17 lengths from 2019 and 2018 winner Tiger Roll. He is far too short to repeat the trick this year although he was impressive. He may well win but I like value in this and I'm going for KINGSWELL THEATRE (20/1).

On one hand, he was beaten 52 lengths by Some Neck around Cheltenham in December. A month earlier he beat Easysland at the same track around this course. I'm hoping to put a line through his latest effort and rely on the ability he showed that day in November.

He likes to have things his own way so I'm hoping he'll remain prominent throughout this mammoth trip. All eyes will be on Easysland and Tiger Roll and it would be nice for Tiger Roll to add another Cheltenham win to his record especially with a bid for a third Grand National now off the cards. Ignore the sentimentality and stick with the value!

Sizing Pottsie?? Plenty of horses with chances in this one and Joseph O'Brien could have three in the frame with Embittered, Entoucas and Us And Them who was third in the same race last year. He's been disappointing this year and Entoucas makes most appeal of the O'Brien challengers but I'd be inclined to go with AMOOLA GOLD (16/1) for Dan Skelton.

He was good when second to the reopposing Sky Pirate last time out but he'll get a couple of extra pounds from that rival as a result this time. The piece of form I like most is his run to be second behind First Flow at Ascot last November. He came from well off the pace there to challenge and might have caught First Flow if the line had come a hundred yards later. First Flow franked that form in a big way when he beat Politologue by seven lengths at the same track in January.

It isn't always easy to pinpoint the winner of this race but it has given us some super champions over the years. Think Envoi Allen in 2019, Champagne Fever in 2012 and Cue Card way back in 2010. The next on the honour roll will be Kilcruit, in my opinion. Willie Mullins is always well represented here and KILCRUIT (2/1) is second favourite.

In recent weeks, the long-time favourite for this race, Sir Gerhard, has been switched to Willie from the embattled Gordon Elliott yard. Willie now trains the favourite and second favourite but if we're going by the market, I'm with the second string. Rarely do I sit back and say 'wow' watching a racehorse. I did with the likes of Douvan and Faugheen in their pomp and I did it when Kilcruit pulled clear of Letsbeclearaboutit at Leopardstown last month.

Patrick Mullins was motionless as he give him the lightest of taps and he went away to win by 12 lengths. I know these are young horses running on the flat but this one could be very special indeed. I hope he justifies my confidence but he is one of my bets of the week.

SELECTIONS AT A GLANCE: