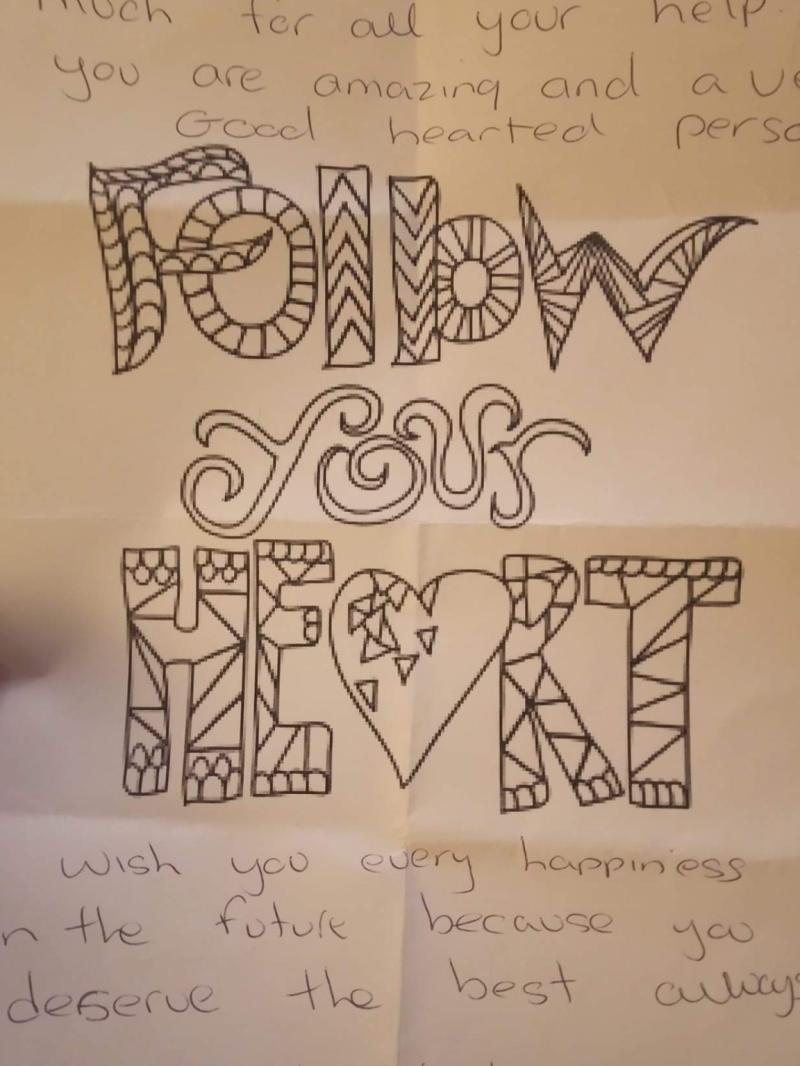 A letter of thanks Sonja received from someone she helped

A local activist has been given The Social Injustice Award for her community work in Dundalk at the 2021 Hero Awards which were announced following a virtual ceremony last week.

The Hero Awards look to identify the exceptional stories of fortitude, courage & kindness in 2020, honouring the ordinary individuals who went beyond the call of duty to make an extra ordinary impact on their community.

Sonja Van Kalkeren has been running the Dundalk Save Our Homeless Group from her News and Deli shop on Cross Street for over six years which all began following the loss of her father.

“I know what it is like to have nothing”, she stated. “I lost my dad a few years ago and that is how it all got started. I just could not hack his death, so I closed the shop.”

“I came back four months later and owed a small fortune. Some weeks I may have had only a tenner in my pocket, but I paid it off. I decided that what I was going to do was help people and we’ve been doing it here ever since.”

The Save Our Homeless campaign began by providing hot meals to those in need, but has branched out to provide even more services such as helping the elderly by providing somewhere for them to have a chat if they are lonely, help with their weekly shop or just by picking up their prescription.

However, Sonja and her team have also stepped up by getting involved in the process to rehome those in need and making sure they are available to make the change in lifestyle as streamlined as possible.

“We work closely with families that have absolutely nothing, when they get their first home or if they need something, we just put it up on our page and get it for them. We continue to support them as when you are after coming out of homelessness you need time to readjust to normal life.”

“You can’t just hand them a key and say there you go here’s your new home. It doesn’t work like that, nine times out of ten they fall flat and lose the house and they are back into a catch 22 situation. We are there as a support network for them.”

The nomination for The Hero Award came from an unlikely source in Orla Halpin, who despite not knowing her personally believed Sonja and her work needed more publicity.

“As soon as I read what this award was about her name just immediately came into my head and I had to put her down” recalled Halpin. “I just felt she deserved to have her work recognised. I wanted her to see that somebody noticed her good work.”

“I only met Sonja a few times briefly as I was dropping things in, but I am delighted for her as she does so much for the town. There is a lot of people who would have been in a bad way only for this woman and I just think she is amazing. I admire her and would love to be able to do what she does.”

Van Kalkeren was humbled to have received the award but was keen to praise all those involved in the project, from her team of volunteers to the many people who continue to donate to the cause.

Van Kalkeren was the joint winner of the award along with Lucky Cambule, who is a campaigner for the rights of asylum seekers in Ireland and was involved in the formation of the Movement for Asylum Seekers Ireland that advocates on their behalf.