Hopes High for Biden to visit Louth again in 2022 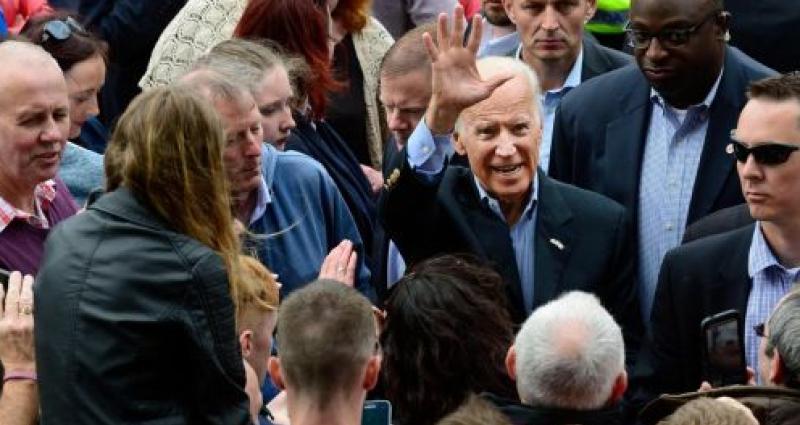 It is hoped the President will return to the county for an official visit in 2022.

Across the world supporters of Joe Biden have been celebrating the Democrat’s victory, with those plans kicked up a notch last Wednesday as he was formally sworn in as President of the United States.

Unfortunately plans for big events to mark the inauguration have been hampered by the current pandemic, but that hasn’t stopped the Louth County Council from marking the occasion in their own way as they look to honour their most famous son.

In leu of official events taking place, they remembered Biden by turning the fountain in the Market Square Dundalk red, white and blue and Fianna Fáil Councillor Emma Coffey was delighted they did so.

“I just felt that even with the Covid times we had to acknowledge the inauguration and celebrate it in some form” claimed Coffey. “Thankfully, Louth County Council were supportive of that and agreed to illuminate the square through the fountain”.

The Stars and stripes were also on full display along with the Irish Tri Colour outside county buildings and the Chairperson of the Dundalk Municipal Council was in a jubilant mood as their work was broadcast to a national audience.

“As I sit here with the TV silent, I can see the county buildings with the American flag being filmed by RTE News and it’s wonderful to see our efforts whatever small being acknowledged.”

Ms Coffey was a prominent member of the Irish For Biden Campaign, which came in for praise from the man himself in helping to get his message to the masses and she was keen to praise the work of Paul Allen and his team who brought her into the fold in July of last year.

“It was built on a small principle of getting on the phone and ringing friends or ringing relatives in America and getting the Irish vote out for Biden. Something as simple of that in July of 2020 gathered momentum.  It was a small contribution but one I am very proud of.”

Mr Biden is seen as the most popular US President in the eyes of many in Ireland and is classed as the most Irish since John F Kennedy in the 1960’s due to having connections in both Mayo and Louth.

Coffey has not been surprised one bit by the fanfare for the newly elected President and pointed to his run in with the BBC as an example of his Irishness, however she also sees him as a possible symbol for the county that the world will see.

“As a small nation we punch well above our weight, our diaspora has many reaches and has had plenty of success. The Wee County, although small our voice is very loud and Joe can definitely be Louth and Proud for us over there. I’m not surprised at all to see his popularity over here.”

Coffey believes Mr Biden’s success will bring extra eyes on the county and is hopeful she can bring tourism to the area through utilising the freeman of Louth’s name.

“I think it is all about the branding, maybe if I lobby the council hard enough, we might get a bridge or a monument or some sort of landmark named after President Biden.

“The Obama Plaza has done well in the Midlands so we might try and get something over in the Wee County to mark the fact we have a Louth man in the white house.”

While the Dundalk based councillor is sceptical that the president will arrive in the county this year despite rumours of a flying visit in June, she is hopeful his love for Louth will see him return to the county.

“When he was given the Freeman of Louth award, it was very evident not just by him but also by his family the pride and honour it was to receive that award so I’d very hopeful that he would return.”

“I think it is more realistic of an official visit in 2022 and I’d be very hopeful that Louth would be on that list. He got a great reaction in 2016 and I think it would be matched if not better on his return in 2022.”