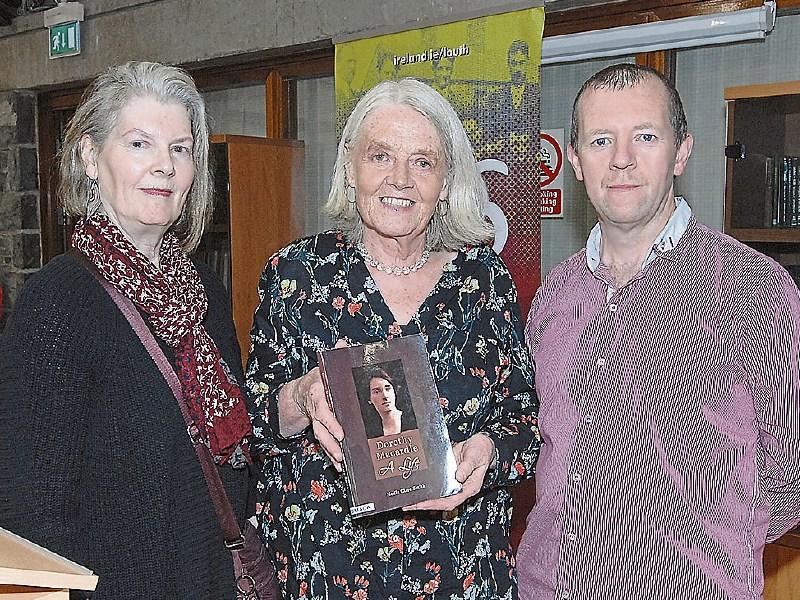 A talk by Constance Short entitled  "A brewers daughter from Roden Place" was held at the County Library Dundalk last week.

The title referred to Dorothy Macardle, the Dundalk woman who was a writer, a feminist, a republican, a European, a person of great talent who was ahead of her time.

“I am no historian or lecturer,” said Constance, “but I felt strongly enough to put this forgotten woman's story together as best I can”.

And she succeeded in doing just that judging by the reaction of the audience.

Dorothy was born in 1889 and grew up at Seatown Place Dundalk.

One of the most interesting republicans to emerge from the Easter Rising and the Her father was owner of the Macardle Moore brewery in the town.

The brewery supplied beer to the British army regiments stationed in Dundalk and the Curragh and Macardle Moore was known as “The Irish Army Brewers”.

When she was 16 she went to Alexandra College in Dublin. She was one of the few Catholics to attend this Church of Ireland school.

She won a scholarship to the Alexandra College Training Department in 1912 and took a Dublin University teacher’s Diploma two years later.

When she completed her education she lived and worked at Stratford-upon-Avon and developed a lifelong interest in Shakespeare and the theatre.

When she returned to Ireland she began writing plays and after the First World War became a republican activist joining Cumann na mBan.

She met Éamon de Valera, who would have such a strong influence on her life, and after the War of Independence, took the anti-Treaty side.

In 1922 she was arrested by Free State soldiers at the Sinn Fein headquarters in Dublin and sent to Mountjoy prison. She was then moved to Kilmainham where she joined a hunger strike. Her father intervened and she was released.

When she came out, the Civil War was over and she found herself on the losing de Valera republican side.

She then became a full-time writer and political activist. During her imprisonment she was sacked from her teaching job at Alexander College.

As a journalist she accompanied de Valera on his tours of Munster. She wrote a book called Tragedies of Kerry, which covered what amounted to war crimes during the Civil War. She also published a collection of short stories.

Then, in 1926 when de Valera founded the Fianna Fail party, she was one of six women elected to the new party’s executive.

Dorothy became the drama critic for The Irish Press. She wrote plays for The Abbey but as Constance said people like Sean O’Casey dismissed her work.

In the 1930s de Valera became President of the League of Nations in Geneva, the forerunner of the United Nations, and Dorothy covered League sessions. And in the 1930s she also wrote her most renowned work, The Irish Republic.

This book was published in 1937 and was considered by many to be a hagiography of de Valera.

But the new 1937 Constitution, drawn up by de Valera, angered Dorothy. She and other feminists were annoyed by Article 41 which declared that mothers shall not be obliged by economic necessity to engage in labour to the neglect of their duties in the home.

“As the constitution stands,” she wrote in a letter to de Valera, “I do not see how anyone holding advanced views on the rights of women can support it, and that is a tragic dilemma for those who have been loyal and ardent workers in the national cause.”

In the spring of 1939, she began a lecture tour of the United States, and was in London in September when war broke out.

She spent the whole of World War Two in England, where all of her siblings lived. She did relief work for refugees from central and eastern Europe who had fled to Britain from the Nazis.

She wrote scripts for the BBC and her novel Uneasy Freehold (1941) was classed in the same “female gothic” genre as Daphne du Maurier’s Rebecca. Paramount films bought the film rights to her ghost story The Uninvited which was released in 1944.

She came back to Ireland in June 1944. Then in 1948 she published Children of Europe, her greatest journalistic work. It was a detailed study of the experiences of children in war-devastated Europe and was based on research done in France, Belgium Holland, Czechoslovakia, and Switzerland.

In the 1950s she was critical of the political influence of the Catholic Church here and of the censorship of books and plays. She was a revolutionary, a journalist, a writer, a European, a feminist, and someone who despised war, fascism, and narrow-mindedness of all kinds.

She wanted to investigate the Magdalen laundry asylums as far back as 1952.

She was ahead of her time.

Dorothy Macardle died in Our Lady of Lourdes Hospital Drogheda in December 1958.

Dev prayed at her bedside hoping would return to the Catholic  faith.  She never did.