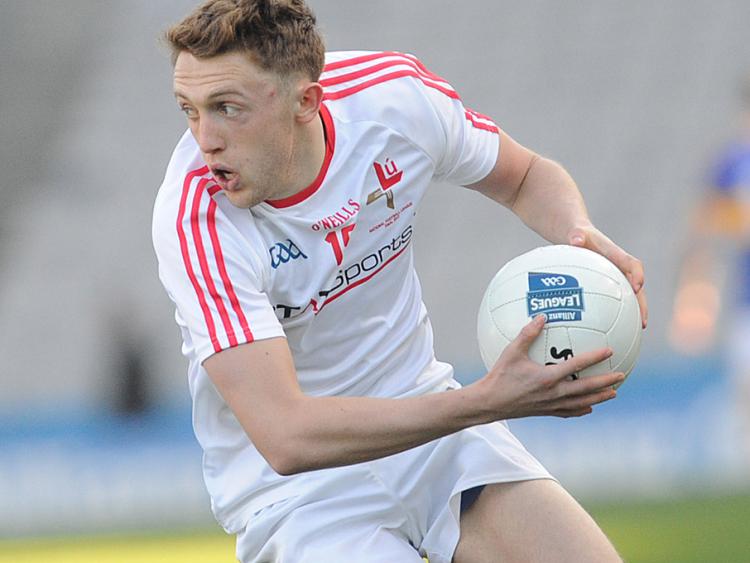 Ryan Burns returned to action as Louth stepped up their National League preparations with a comfortable victory over London. (Pic: Arthur Kinahan)

Ryan Burns returned to action as Louth stepped up their National League preparations with a comfortable victory over London.

Sunday’s game in Darver saw Wayne Kierans get game-time into 26 of his panel, with Andrew Mooney and James Craven also coming back into the fray following injury.

A comfortable triumph against the Division Four opposition, the outcome was never in doubt after a sweeping first half move ended with Eoghan Duffy finishing to the back of the net, for the only goal of the contest.

The Reds restricted London to just two points in the opening period, where they had the benefit of the wind advantage. Indeed, Sam Mulroy and Ciarán Byrne, who were Louth’s pair inside, weren’t short of supply, yet the heavy underfoot conditions prevented them from fully exploiting The Exiles’ rear-guard.

Tommy Durnin was among the hosts’ first half point scorers, a fine conversion off his left foot, with the Westerms man getting the full 70 minutes as he primes himself for the spring schedule. His importance to the cause is significant, but who goes alongside him isn’t exactly clear-cut.

Dreadnots’ James Califf provided a towering midfield presence on Sunday, though, with Bevan Duffy and Conor Early not featuring, it could be that three players are fighting to be Durnin’s partner.

Elsewhere, Dermot Campbell is settling into the full-back berth steadily, while Glyde Rangers’ Niall Sharkey is a speedy option to the Dreadnots man’s right. However, Craven, who came back into the team after an enforced absence, unfortunately, limped off before the interval, which glazes his availability for January 26’s trip to Longford in some uncertainty.

Burns came in for the second half and immediately became involved, frequently getting his hands on the ball, while helping The Reds to build a comprehensive advantage from placed kicks.

There was a brief London revival, which entailed five points to just one in reply, but The Wee County turned the tables as full-time approached, with Ciarán Downey and John Gallagher joining Burns on the scoresheet.