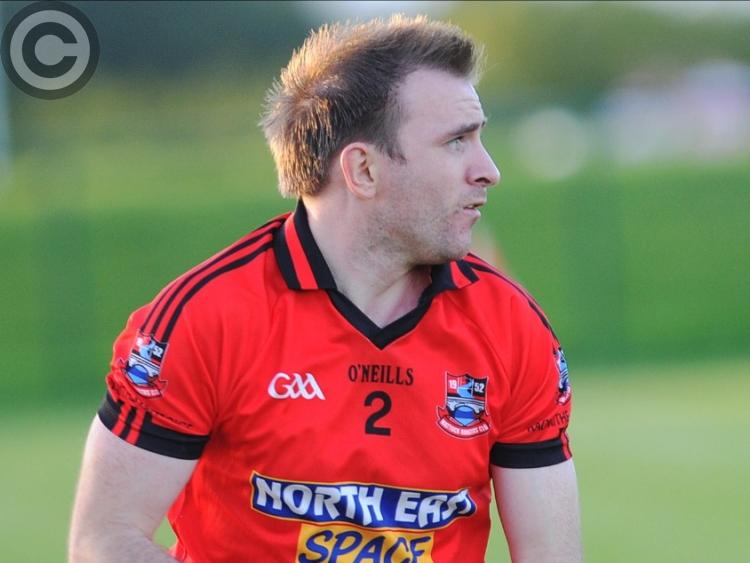 Seán Gilsenan has been there, done that, and knows a thing or two about winning the big titles at club level too. (Pic: Arthur Kinahan)

Seán Gilsenan has been there, done that, and knows a thing or two about winning the big titles at club level too.

The 34-year-old Mattock Rangers player was part of those glory years in Collon throughout the mid-to-late 2000s.

But if you ask him about his favourite footballing memories with Mattock, he can list them off quickly enough:

“The 2005 final against The Blues, or 2009, or the 2010 semi-final against St Patrick's stand out in my mind as really difficult games, played at a high standard and decided in the closing minutes of the game.”

Being slightly older, and wiser, brings with it a few hurdles to negotiate these days - ones that younger players don’t necessarily have to worry about.

As he speaks to the Democrat on Sunday, Gilsenan is in the middle of travelling as part of his job with Intel. He’s moving quite a lot of late - he’s an assured life-juggler at this stage, it would appear.

“I'm an Operation Manager at Intel, which involves a bit of travel lately,” he explains. “Family and, by extension, work take priority. But I try and schedule things as far as possible in advance so I don’t miss out on my responsibilities.”

He’s quick to acknowledge the help and understanding from management in this regard.

“Our management team with Mattock have been excellent this year at being consistent on the scheduling of training, which is essential for working lads in this day and age.

“Once you have good dates and times, around two-plus weeks in advance, you can manage family, work and the team.”

However, he adds: “It’s a killer when things are decided or changed last minute from a fixtures perspective. It needs to be addressed out of fairness to GAA families, never mind players.”

Back to those whipper-snappers for a moment. As one of the ‘old heads’ in the Mattock group - alongside the likes of the Reid brothers, David and Adrian, Daniel Bannon and Dáire Englishby, Gilsenan is only too delighted to see the next generation emerge.

“The group of young lads that have come onboard in the past three or four years have been a breath of fresh air and they have made the team their own very quickly. The way they have taken to the team and their performances makes it easier for the likes of myself to focus on our own game.”

Their opposition on Saturday are not to be taken lightly, mind.

Kilkenny may not be a footballing stronghold, but Mullinavat have a pedigree, warns Gilsenan.

“I know they are three-in-a-row champions of their county and have had excellent performances so far in this year’s Leinster championship. They have a winning mentality and have come out on top in lots of close games recently.”

There’s more than a hint of caution in the way the 34-year-old talks about Saturday’s clash. It’s with good reason, Mattock have had a difficult few years and a return to senior football was almost an expectation in Collon.

“We had so many disappointments in recent years that we didn’t get ahead of ourselves prior to winning the intermediate final. Since then we have been playing game-to-game, without much pressure. We have big ambitions, but are very aware that ambition itself doesn’t win games”, Gilsenan says.

All roads lead to Drogheda on Saturday, but in the days leading up to the weekend, Collon will be awash with colour and chat about the big game. It’s like those glory days nearly a decade ago.

“The best thing about the past two months has been the buzz and excitement returning to the village about the football team. We have always had great support, it’s great to have something for us all to get behind again.”