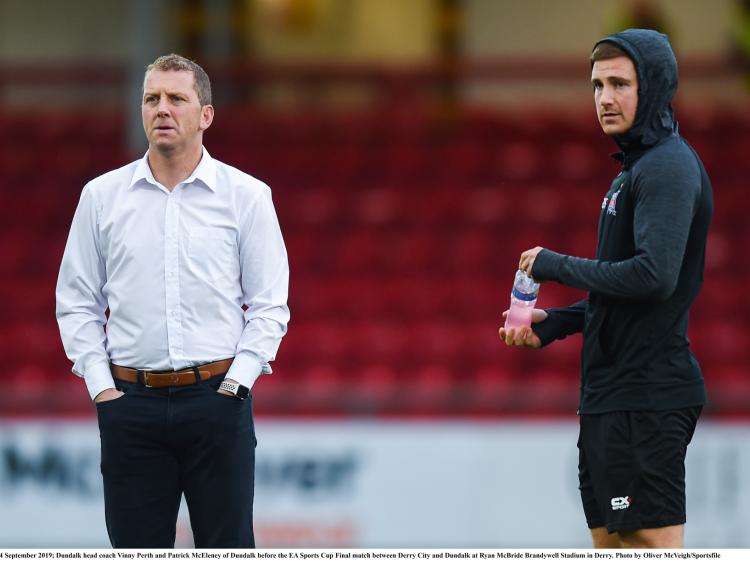 Dundalk FC’s domination of the domestic game has only ever been rivalled by Waterford, and it is there where Vinny Perth can smash another record of the club’s illustrious history this weekend in a season that, statistically, suggests they are as untouchable as they have ever been.

In the euphoria that followed their dramatic penalty shootout win over Derry City in the EA SPORTS Cup final last Saturday, it was lost that Dundalk had just set a new club record of 27 domestic games undefeated (24 wins, 3 draws) – breaking past the 26 achieved across 2014 and 2015.

It is a matter of when, not if, Perth will lead The Lilywhites to a fifth league title in six years. It could be confirmed as early as next Monday.

Only Waterford – with five titles in six seasons (matched by Cork United back in the 1940s), and six in eight, during the 1960s and ‘70s – have had a stranglehold on Irish football for this length of time. Dundalk are now the first-ever club to achieve seven successive top-two finishes.

Given the boom and bust nature of the game here, where clubs fall as quickly as they rise, such dominance never seemed likely again. The opposition hoped – and expected – that the departure of Stephen Kenny would slow Dundalk down. If anything, the gap has widened. 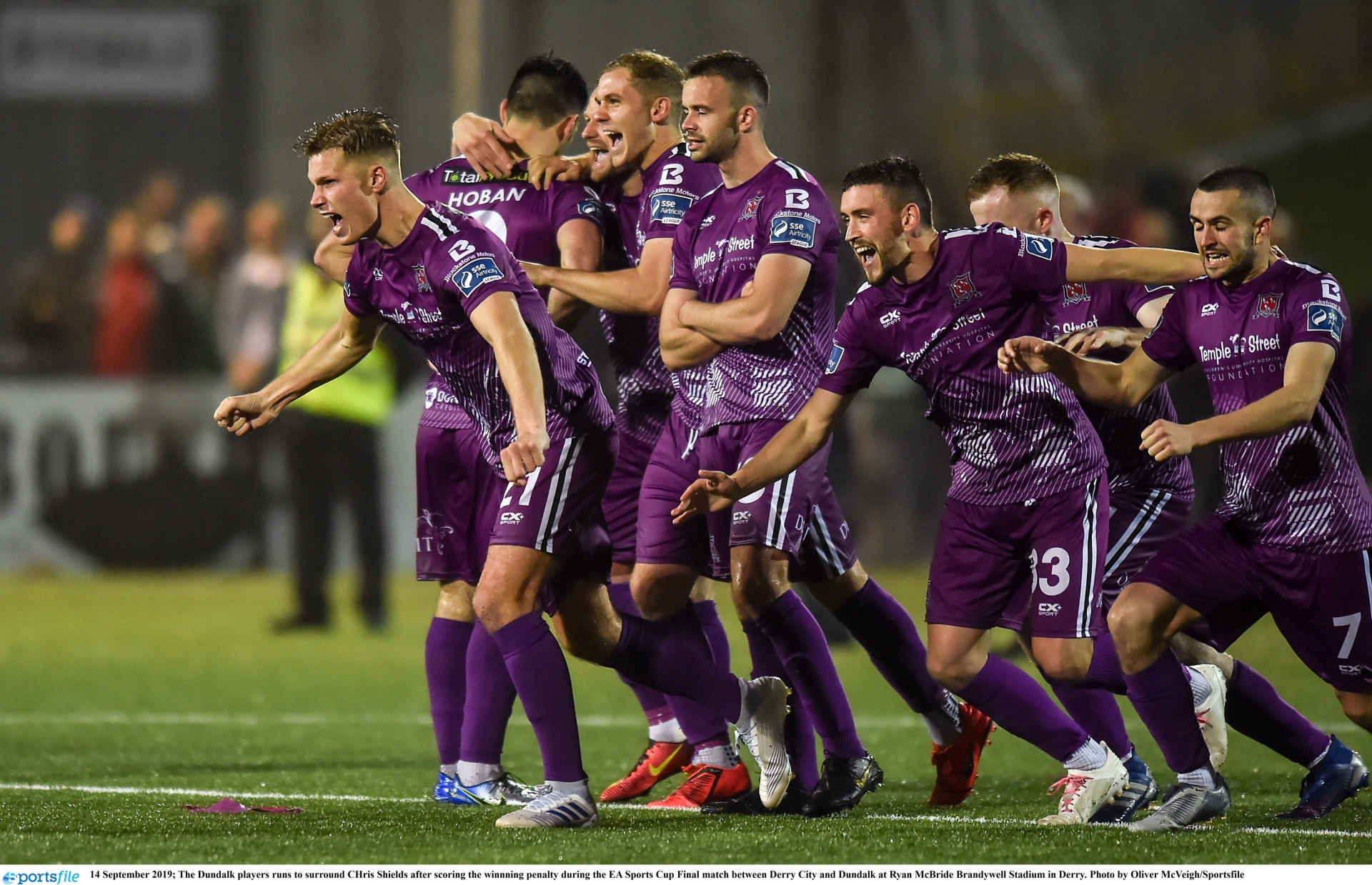 Perth, and first-team coach John Gill, have more than once noted the question marks and criticisms around their management structure earlier this season.

They felt intense heat after a second straight defeat in Sligo in April, when many felt they were staring down the barrel. To have emerged from that fire by masterminding Dundalk’s best-ever run of results in over 90 years of competition is extraordinary.

This weekend, they could be crowned champions in stunning style by breaking the club’s league record of 22 games unbeaten, achieved across two seasons in the early ‘90s. Dundalk are currently on a run of 21 and, by avoiding defeat in Waterford on Friday, they would break their in-season record of that number, which was set in the 1975/76 campaign.

They could, too, still break the 90-point barrier for the very first time in the League of Ireland, having accumulated the current record total of 87 themselves 12 months ago. The domestic treble – only ever once achieved, by Derry back in 1989 – is also firmly in focus.

Perth’s players will hope to secure the second leg of that treble as soon as possible and they can do so with back-to-back wins this weekend. Friday’s trip to the RSC (7:45pm) is followed by Monday’s visit of Shamrock Rovers to Oriel Park (7:20pm).

Dundalk – the most successful club in the Premier Division era with seven titles since its introduction in 1985 (they spent nine of those 34 seasons in the First Division) – refuse to accept that this league is done and dusted. 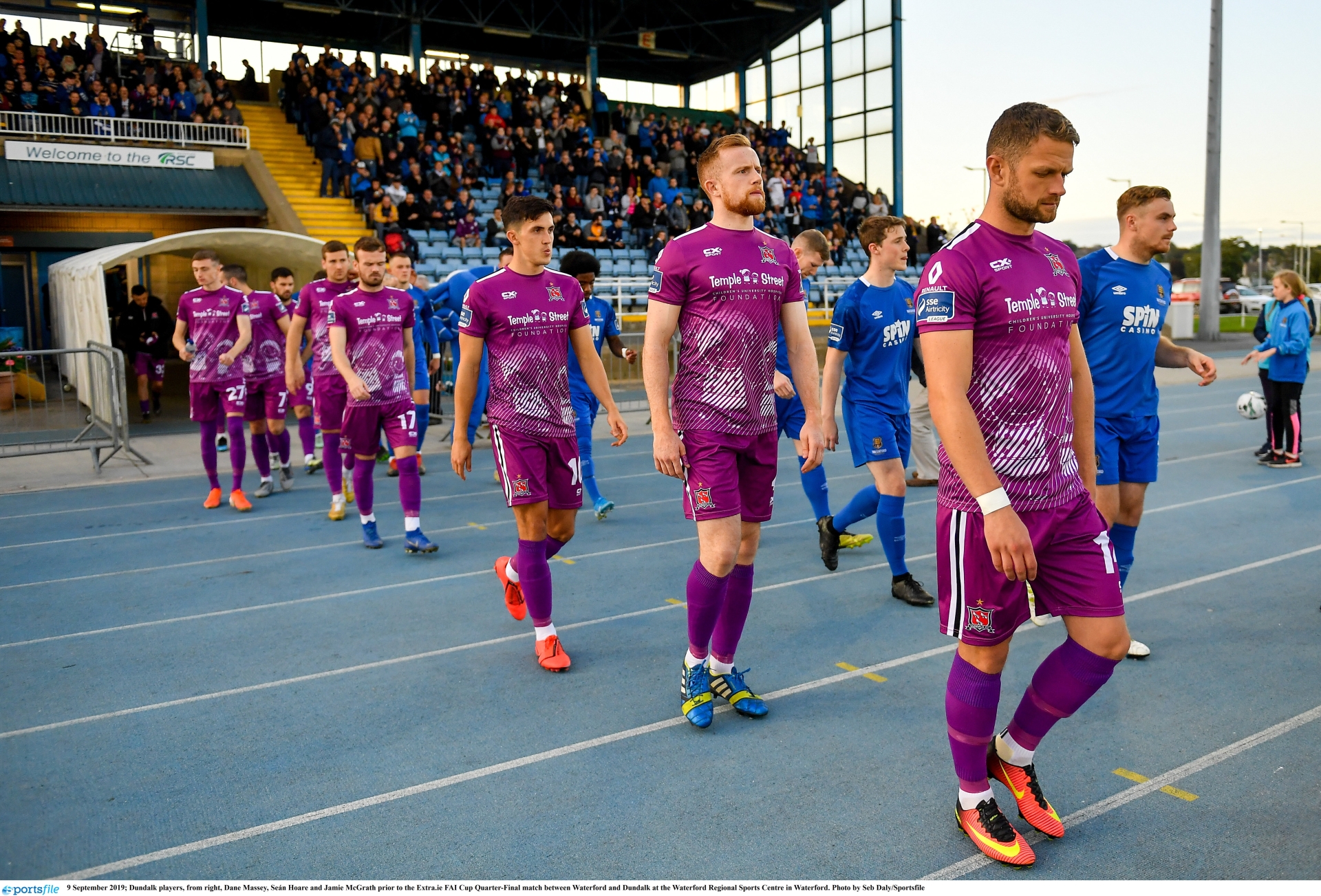 “It’s not over until the fat lady sings,” Gill insists, with six games still remaining. “We have put ourselves into a fantastic position. You would like to think that we will put it to bed, but until it actually happens, we’re not going to take anything for granted.”

In reality, the destination of the title was decided when they beat Rovers in June. The Hoops have improved this year to move into second after the fall of Cork City. However, they have not laid a glove on a Dundalk team who, incredibly, have conceded just 13 goals in 30 league outings.

To have performed as they have this season is all the more remarkable given Perth’s rotation policy – particularly in defence – which has proven masterful, and the number of injuries they have suffered, mainly in midfield.

It has been the definition of a team effort. No single player has constantly grabbed the headlines. One that does deserve special praise, however, is Seán Gannon, the humble marauding right-back that rarely receives his due recognition from anyone outside of Dundalk.

He has been part of a mostly watertight defence, and he has popped up with two huge goals – that winner at Tallaght Stadium in June and the equaliser in Derry which forced extra-time and ultimately penalties.

Last Saturday was the ninth notable trophy for Gannon in his sixth season at the club – four Premier Divisions, two FAI Cups and now three League Cups. Personally, he has been part of the title-winning squad in five of the last six years, having also won it with St. Patrick’s Athletic in 2013.

“I’ve been blessed since I came here,” Gannon says. “I’ve been part of great squads and great teams that have had success.”

A voice of experience, he, like Gill, wants the champagne to remain on ice. “There is a lot of football to be played,” the 28-year-old adds. “A lot of league games, tough games. We need to make sure that we just stay grounded and stay focussed, like we always do.

“Just take it game by game. We’ll prepare for Waterford on Friday and that’s all we’ll be looking at – we won’t be looking further than that.”

Seventh-placed Waterford should not be taken lightly having won their last two league outings at Turner’s Cross and Dalymount Park, scoring late in both. Those results have, effectively, confirmed Premier Division football for The Blues in 2020 and give them a free shot at the champions, who are currently 10 points clear at the top.

Rovers host St. Pat’s on Friday, but even if the Hoops were to lose, Monday is the earliest that Dundalk can be crowned.

Barring a shock result in Waterford, a fitting stage will be formed for the club to claim their 14th league title and move to within three of Rovers’ record 17. “A dream situation”, as midfielder Jamie McGrath put it.

Wary, he says: “We can’t look to the Rovers match. Obviously, it might work out well if things go our way. But you get caught if you think about games in advance in this league. You can’t afford to take your eye off the ball. It would be a dream situation, but we can’t look beyond Waterford.”

Supporters unable to make the trip can watch the action unfold at the RSC live on RTÉ, whose cameras will then roll into Oriel Park for a mouth-watering Monday night showdown.