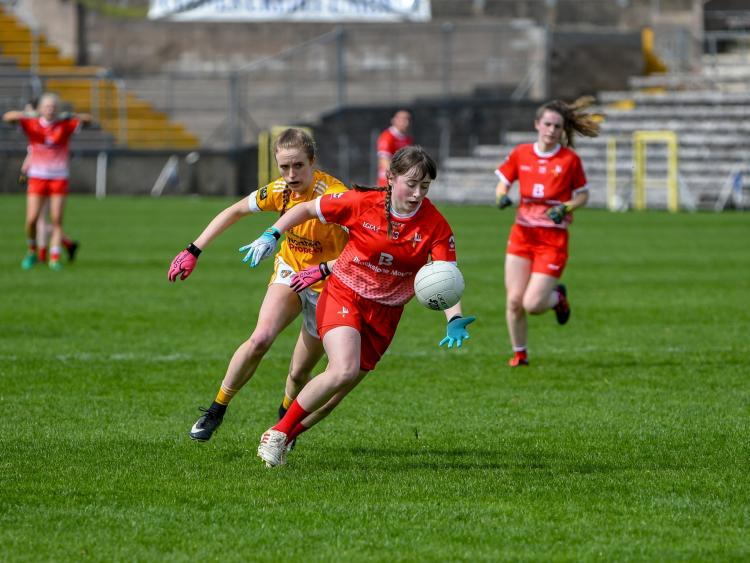 Louth banished their Clones demons to give themselves a shot at erasing the memory of their other outstanding hurt - last year’s All-Ireland JFC decider - after seeing off Antrim in Saturday afternoon’s semi-final.

Darren Bishop’s team were ruthless against Ulster champions Antrim, who pipped them in the Division Four semi-final at St. Tiernach’s Park earlier in the season, and their comprehensive victory margin was certainly not a source of flatter.

Captain Kate Flood portrayed her match-winning ability with 2-6, her first goal coming at a critical time of the second half to give the Reds an unrelinquishable cushion. Antrim had caused the winners’ defence constant problems up until that point, only the Saffrons’ finishing was far from up to scratch as they granted Louth repeated reprieves.

In saying that, The Wee County were in the ascendency from the off and led six points to one, only for a mistake by ’keeper Una Pearson to allow Lara Dahunsi - Antrim’s dangerous forward - hit the game’s first goal.

Though Bishop’s charges rallied and took a 0-10 to 1-3 advantage to half-time, before, in spite of losing Eilis Hand to a sin-binning, pulling away towards the close with Flood (2) and substitute Lauren Boyle finding the net.

Indeed, the impact of Louth’s subs was telling, with Sinead Woods providing energy at midfield that had been lacking previously. The Kilkerley Emmets player has now come in from the line to impressive effect in two successive outings, which surely gives her a major chance of playing a more prominent role in next month’s final.

Though, even had she been beaten, Louth were too far ahead for a contest to materialise. Their most complete display of a campaign which has thus far saw them lose just twice, Bishop and co will be determined to learn from the mistakes of last year’s miserable appearance at Croke Park, where Limerick prevailed resoundingly.

Still, it’s set to be Louth’s fifth junior title tilt of the decade. The silverware has returned to The Wee County only once over the same course, and that’s a tally the Reds will be intent on improving.