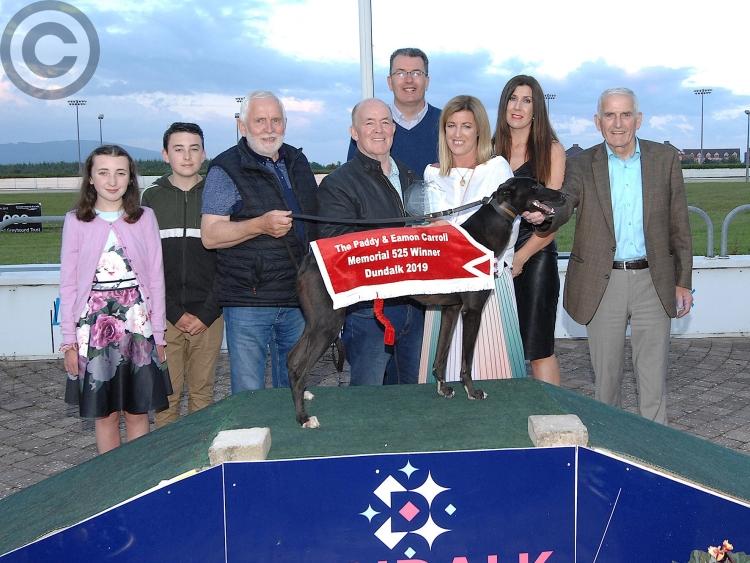 Members of the Carroll family with winning connections of Cricket Club at Dundalk Stadium on Saturday night. (Pic: Arthur Kinahan)

Semi-final form worked out in last Saturday night’s Paddy & Eamon Carroll Memorial 525 decider at Dundalk Stadium, with the three penultimate round winners fighting out the finish.

But as they crossed the line, the order wasn’t as favourite-backers had anticipated. Having looked a winner at the last bend, in front by a couple of lengths, 4/7 shot Robbies Turbo got run out of it by Cricket Club, beaten a short-head. Coloured Lily was a further length back in third.

Running for Donald O’Neill’s in-form Coalisland kennel, Cricket Club broke his duck in the semi-final, winning at the eighth attempt. Her time of 29.73, however, left the 60-pounder with six lengths to make up on Robbies Turbo and three on Coloured Lily.

On that occasion Cricket Club made a smart break, and she repeated the feat in the decider, leading up from Robbies Turbo and Coloured Lily. Whatever chance the other three had of getting involved disappeared when they got into a tangle at the opening corner.

Robbies Turbo closed on the leader halfway down the back before sweeping into the lead approaching the third bend, and when the Armagh runner pushed two lengths clear, it looked for all intents and purposes as though a decision had been reached.

But Cricket Club wasn’t done with. Throwing down what proved a race-winning challenge, the O’Neill runner closed with every stride, and it was right on the line when she got her head in front.

The winning time of 28.70 was a career-best for the daughter of Iso Octane and Highview Grace, whose earnings were boosted by €2,000.

Groveshill Orla had locals among the big crowd present at the third running of the Carroll Memorial final in fine voice, coming home in front in a 525. Owned in partnership by Dowdallshill’s Arthur Boyle and Seamus Casey and trained by the latter at his Channonrock kennel, the daughter of Kinlough Brae was back racing after a lengthy break, but showed no sign of ring-rust to score from Croaghill Tony in 29.13.

Gerry Callan’s Knockbridge kennel was on the mark on Friday night with Knock Them Bandy turning in a career-best run over the 400 distance. The well-made fawn ran from three and was always in charge, winning for the third time in his six-race career in 21.39.

The build-up to the Marshes Dundalk International on July 12 is gathering momentum, with last year’s Irish Derby winner, Ballyanne Sim, already pencilled in. It’s possible he could be joined by Priceless Blake, winner of last Saturday night’s English Derby decider at Nottingham.

Priceless Blake is owned by Bryan and Kathleen Murphy and trained in County Kilkenny by Paul Hennessy, a combination that was successful in the 2013 International with Priceless Sky.