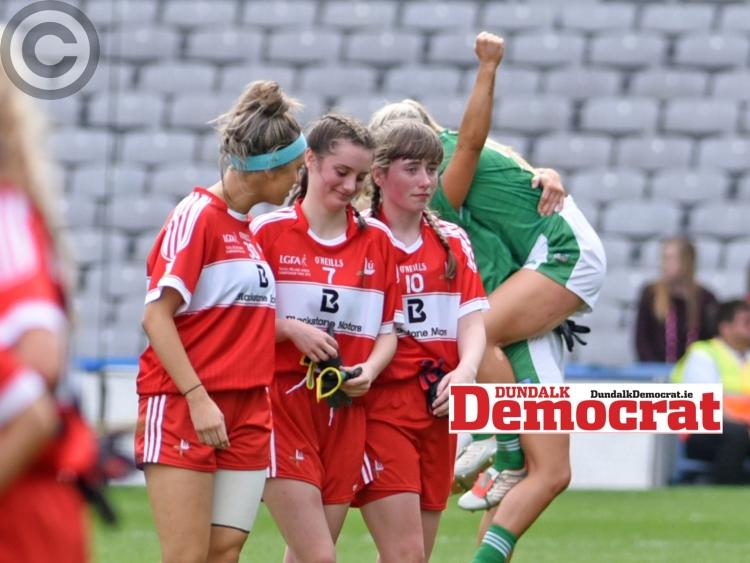 Louth made it three league wins in a row with an impressive victory over fellow promotion chasers Antrim in Cooley on Sunday.

Darren Bishop has used pre-season friendlies and the early stages of Division Four to evolve his team’s style of play and they put their more positive, possession-based game on show once more in bitterly cold conditions.

“I’m very pleased with the team’s performance and it’s great to get another win in a very competitive group,” said the Louth manager after the game.

“I felt it took us time to judge the breeze, but once that happened we took control.”

Driven by a strong midfield pairing of Michelle McMahon and Eimear Byrne - and the inspirational attacking duo of Niamh Rice and Lauren Boyle - Louth attacked the visitors with energy from the outset and were ahead within 90 seconds through a Rice free.

In the aftermath, Antrim ’keeper Anna McCann’s kick-out was adjudged to be too short by match referee David Hurson and Susan Byrne’s quick thinking caught them cold; the St. Kevin's star floating the ball over McCann and into the net to give her side an early 1-1 to no-score lead.

Byrne extended Louth’s advantage with a well-taken point and the Reds were 1-4 to the good after a pair of Lauren Boyle efforts, the first a brilliantly angled effort. A brace from Rice and a Sinead Woods notch made it eight scores without reply.

The Saffrons, already facing a difficult task, were then dealt a further blow as Una Pearson’s kick-out was superbly won by Rice around the middle of the field and the pacey full-forward, playing on her home pitch, went on a sensational run through the Antrim backline and fired low past McCann. Rebecca Carr and Boyle followed up with points to give the hosts a commanding 2-9 to 0-0 cushion at the interval.

“Throughout the game I was very impressed with our defence and how well we held Antrim scoreless in the first half,” Bishop added.

“It was also a good opportunity to get looking at some girls that have been sitting out and hungry to get some game time.”

STRONG RE-START
Antrim required a strong start to the second half if they were to become in any way competitive, but Carr opened the scoring for Louth. Seán O’Kane’s team eventually got on the scoreboard on 38 minutes through Caitlin Taggart and they were now seeing more possession, but struggling to find a way through a well-organised home defence.

Indeed, Louth were adept to breaking forward at speed and this was apparent midway through the second period when McMahon burst forth only to be fouled with the goal at her mercy. Rice slotted home the resultant spot-kick, before another Woods point and Alannah McLaughlin’s scrambled goal - either side of a Aoife Taggart goal for Antrim - saw the Reds assume a 4-11 to 1-3 lead in the closing moments.

Antrim had the game’s last score as Taggart got her second goal to restore some pride on a tough day for the Ulster girls. All is not lost for Antrim, however, as a win over Carlow in their final game will see them into the semi-finals, while Louth play their back fixture against the Barrowsiders this weekend.

“We now have a difficult three weeks ahead of us with three very competitive games. Each of those teams will be hoping to get a semi-final spot like ourselves.”