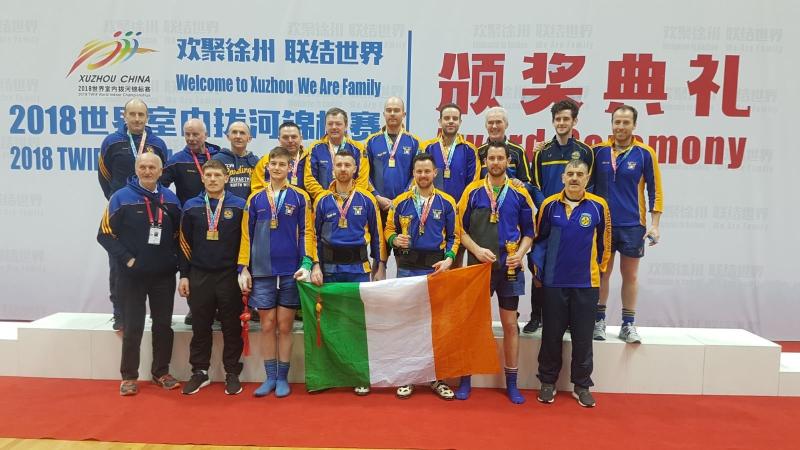 World domination is often the aim for team's competing on a global stage, however, St. Pat's TOW club are one of the few outfits who can actually claim to have achieved it, and achieved it again.

Among the 100 sides in  , the Shelagh pullers completed a clean sweep at last week's club world championships in Xuzhou, China, winning gold medals in the 560kg, 600kg, 640kg and 680kg sections for the time in 16 years. They remain the only team to have completed this feat.

And, as if this wasn't enough, they picked up yet more silverware when representing Ireland in the country event, securing a gold in the 560kg event and bronze at 600kg. Indeed, they just missed out on a medal at 640kg.

and Dutch opposition were among those to fall to St. Pat's in the 640kg section later on day one as the Irish lads claimed their second gold of the day in a similarly convincing fashion. Four of the 560kg men were on this team also; Gary Conway, Hugh Óg Conway, Seán Conway and Michael Owen McGreehan, joined by Martin Shields, Warren Conway, Declan Griffin and Ciarán Fitzpatrick.

Day two brought the remaining titles, though it was some effort for St. Pat's to prevail in the 600kg considering its marathon format. They battled their way through a group of nine, making it to the final where Scotland's Tinto Farmers offered a thorough examination, but one St. Pat's ultimately passed. Team: Gary Conway, Hugh Óg Conway, Seán Conway, Michael Owen McGreehan, Martin Shields, Tom Griffin, Declan Griffin & PJ Griffin, coached by Hugh Mór Conway.

This feat of taking all four world club senior men’s titles is an incredible one considering the most any other club has taken two titles from the one championships. But St. Pat's have now taken all four twice, and have also taken three of the four on two occasions, in Killarney in 2006 and Volendam in 2016.

And to then represent Ireland with such class is a testament to the quality of the team and the club. Coach Hugh Mór Conway was thrilled with the fantastic performance by his full squad, with the added bonus that his three sons, Gary, Hugh Óg & Seán had formed the core of all seven teams, along with Michael Owen McGreehan.