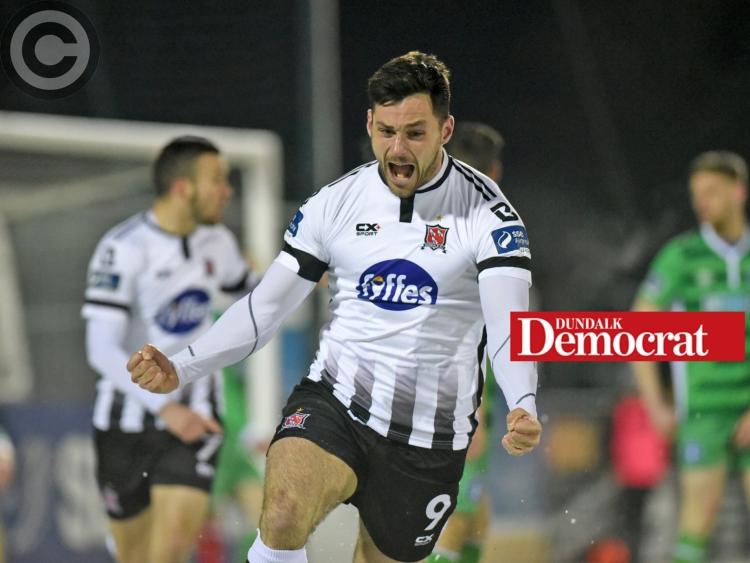 Patrick Hoban feels Dundalk "put their stamp on the league" with the 8-0 win over Limerick at Oriel Park last night.

The striker scored twice in the first-half as the Lilywhites cruised to a first win of the season while reaching plenty of milestones in the process.

Hoban bridged a 1,229-day gap to his last Dundalk goal on the first home start of his second spell and the winning margin was also the largest of Stephen Kenny's reign. Added to this, Stephen Folan and Karolis Chvedukas got their first league goals for the club.

Hoban said after the game: "It was good to be back. I'm only getting back to fitness really and match sharpness, but it's all coming together slowly but surely.

"It was a great team performance. People could say that the first two games didn't go to plan with a nil-all and a nil-all. There was a bit of pressure on us (against Limerick) you could say, but the lads responded really well and we put our stamp on the league tonight I reckon."

He added: "People have their opinions and we're disappointed to have only taken two-points from (our first) two games as well.

"But, all we can do is rectify that on the pitch and I thought that straight away, from the off today we were on the front foot. We just didn't give them a second to breathe and when you play like that, at that intensity, it's very hard for teams to play against us.

"Everyone was on fire today and it just all fell into place."

The opening goal evidently met a lot to him on a personal level as he raced over to celebrate in front of The Shed. Ronan Murray provided the assist and linked-up with Hoban effectively throughout the night. The pair a house in Dundalk and when asked if their on-field relationship bore any similarities to the lethal partnership he had with Richie Towell in the 2013/14 seasons, Hoban said: "He (Murray) had a fantastic game and was unlucky not to score as well. I'm sure it's only a matter of time before he scores too.

"He's my roomie, my housemate. We're both from the same province, he's a Mayo man and I'm a Galway man. We just get on like a house on fire off the pitch with living together.

"Obviously, you could say that (similar to his on-field relationship with Towell). We played really well tonight, but we have to keep improving. There's a lot of improving to do and we'll keep working on the training field, and hopefully bring it into play in the future," said Hoban.