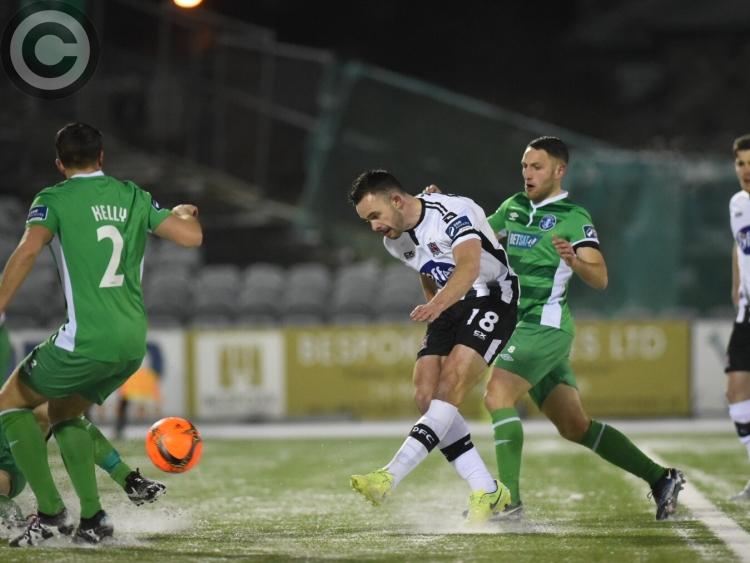 The best of the West braved the Beast from the East at Oriel Park tonight as Patrick Hoban marked the first home start of his second spell with Dundalk FC by putting in a man of the match display.

Hoban struck twice in a first-half where the Lilywhites put Limerick to the sword in the snow, hitting the net four-times before Paul Tuite's half-time whistle. The striker's first, on seven-minutes, arrived 1,229 days since he last felt the goal-scoring sensation in a Dundalk jersey and, like the proverbial London bus, he brought up his brace just 18-minutes later.

Robbie Benson registered the goal of the night  after Hoban had opened the scoring. A neat one-two with Ronan Murray - who assisted Hoban's first - 20-yards from goal saw the midfielder steady himself before stroking to the bottom corner.

Another of Dundalk's Western convoy, Stephen Folan, added a fourth with a header in first-half stoppage time as the Lilywhites - showing just the one change from their stalemate with Shamrock Rovers on Friday night, with Dylan Connolly replacing Jamie McGrath - went to the interval in total control.

It took substitute Karolis Chvedukas only to open his account in the second-half before the ever-impressive Michael Duffy teased home the sixth on 66-minutes.

Dylan Connolly rounded Limerick 'keeper Brendan Clarke for his side's seventh and Duffy added an eighth with the last kick of the ball.