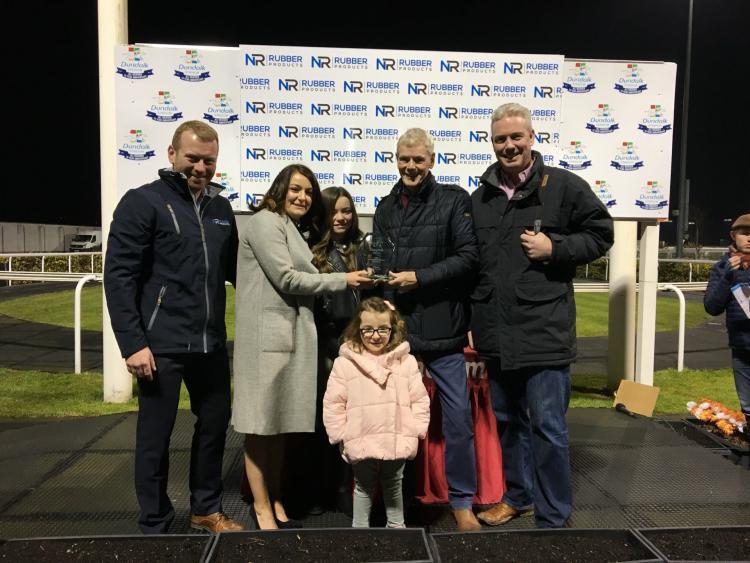 Four-times a winner at Dundalk between October and December last year, Clear Skies (11/8f) won at the first time of asking in 2018 by trouncing her opponents in the €25,000 Phone Alarms Handicap at Dundalk on Friday night.

Displaying a powerful change of gear, the Aidan O’Brien-trained half-sister to the 2005 Epsom Derby winner Motivator came home five-and-a-half lengths clear of the field and could now be heading for the valuable Group 3 Winter Derby at Lingfield Park on February 24th. The winning rider was Aidan’s son, Donnacha.

The daughter of Sea The Stars, who races in the colours of the legendary JP McManus, has come a long way since winning a Dundalk maiden on November 8th and has become a firm favourite at the track.

The second of the card’s two €25,000 races was won by David Marnane’s Settle For Bay (11/8f, Donagh O’Connor), who was recording a fourth-successive win at Dundalk when comfortably accounting for Red Avenger and six other opponents in the D Hotel, Drogheda, Handicap. Like Clear Skies, he’s a very progressive horse.

Red Avenger is trained by Damian English, who was the guest on the evening’s ‘Get In’ programme on At The Races, and, appropriately, he secured a win on this card for the third-successive year when Bluesbreaker (4/1, Rory Cleary) gained a second-successive Dundalk win in landing the second division of the Horseware Ireland Handicap.

The first division went to Three Majors (12/1), who overcame a wide draw to win by a hard-fought neck under Kevin Manning in the colours of Rita Shah.

Anthony McCann is another trainer who enjoyed a good run at Dundalk towards the end of 2017 and the signs are that it has yet to run its course.

Well-backed on course, Nimitz (11/4f, Billy Lee) gained reward for recent consistency when landing the NR Rubber Products Handicap for trainer Charles O’Brien. It was the four-year-old’s first win at the fourteenth attempt, although he had been placed six times in ten runs prior to Friday’s win.

The biggest-priced winner of the evening was (33/1) who scored at the first time of asking when landing the Staunton Office Supplies Irish EBF Fillies’ Maiden for trainer Ado McGuinness. The winning rider was Robbie Downey. It was the third week in a row that Ado had saddled a winner at Dundalk.

The card began with a win for Patrick Prendergast’s Brave Display (11/2), who lived up to his name under Chris Hayes getting the better of Plough Boy by a head in the Dundalk Business Club 2018 Handicap.

Trainer Andy Oliver was winning maidens for fun at Dundalk towards the end of last year and he landed another one on Friday when The Phantom Punch (4/1), who he also owns, jumped out and made all to win the Racing Post Apprentice Maiden in good style in the hands of Conor McGovern. The decision to drop him back five furlongs in from his last run was clearly an inspired move by the trainer.

Dundalk’s next meeting is on Friday, February 2, with the first race being due off at – if a race divides, which is entirely likely given the popularity of the track’s fixtures.