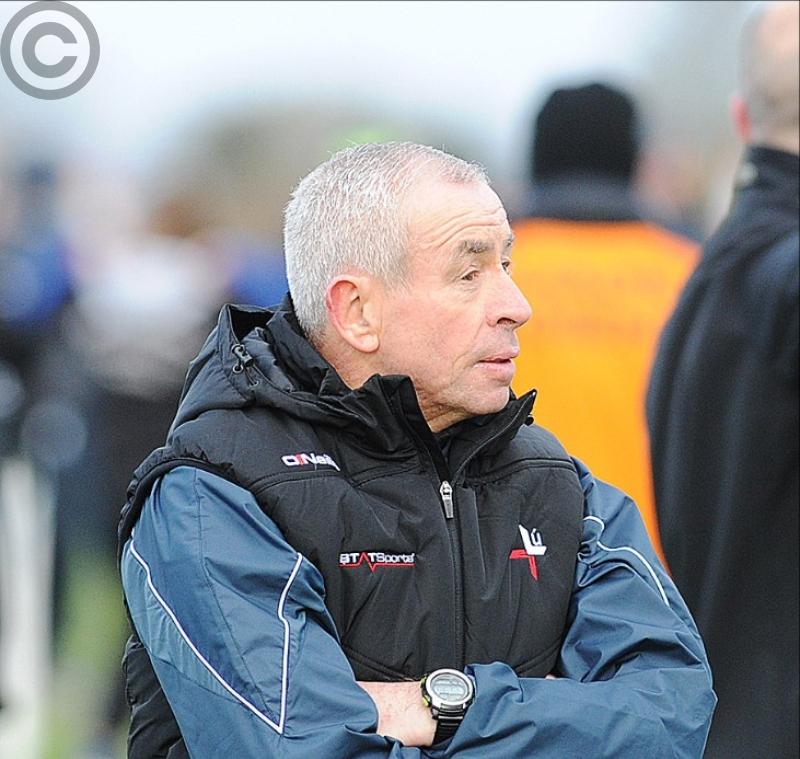 The tapes are down, the eight runners on their toes - there to see they get off to a level start is the starter, up on his rostrum.

The weather's not the best for looking on, but there might just  be a bigger than number of punters at Drogheda on Sunday to see how this county's representatives fare as the race for National League honours gets underway.

This game with Down marks Louth's return to Division Two, the Reds made it there on the back of promotion two-years running. It's also Pete McGrath's first game in charge in a competition of real substance since filling the post vacated by Colin Kelly last year.

Louth's return to Division Two, the Reds made it there on the back of promotion two-years running. It's also Pete McGrath's first game in charge in a competition of real substance since filling the post vacated by Colin Kelly last year.

The drop to Division Four at the beginning of 2016, the first time the county took its place on the lowest tier since the introduction of four divisions, was a downer; but before long there was an upwards move.

The rise from the lower reaches happened straight away, and there was a title win to embellish promotion. Another step up the ladder followed. There was no trophy to accompany this one, but that didn't really matter; the prize that mattered was tucked away.

Winning promotion from Division Three was a fine achievement – staying at that level would have been as much as most would have expected.

Do a straw poll today among supporters and it's for sure the majority of them would be satisfied to see their team retain Division Two status. As for finishing in the top two? Not even those wearing Elton John-sized red-tinted glasses would think that one possible.

Just take a look at the seven teams lined up in opposition: Cavan, Cork, Tipperary, Roscommon, Meath, Clare and Sunday's opponents. A formidable lot, with the task of winning enough points from them to stay put made even more difficult with McGrath having to take his team on the road four times, twice in the first three rounds (against Cavan and Cork).

The new boss is not underestimating the task ahead, but he's up for it, and, he contends, so too are his players, though they may not fully appreciate what's required.

Speaking after the O'Byrne Cup tie with Longford a few weeks back he said: “It's a fresh challenge, a new challenge (for me). I have a group of players who are looking forward it (the challenge). Some of them may not just realise what is needed in terms of the work that has to be done, in terms of the level that they need to be training to and working in order to compete against the Corks, the and the .

“I think the road ahead is going to be hard, it's going to be demanding, but that's the nature of inter-county football. It's a tough environment and you have to be 100% on board and fully committed.”

Unfortunately, one of the young players McGrath spoke about, Sam Mulroy, sustained a serious injury in that Longford and has since been joined in the sick bay by O'Connell's Niall Conlon. On the plus side, Conor Grimes is back on the panel, while Ryan Burns is available having been on McKenna Cup duty with Queens. The recent addition of Eoghan Lafferty renews the St. Patrick's county team connection, which was so strong when Paddy Keenan, Colin Goss and the Finnegan brothers, Dessie and Ray, were in their prime.

The O'Byrne Cup campaign was confined to just two games, but that's not to say January was allowed slip by without much-needed activity. Two All-Ireland Club Championship semi-finalists, Derry's Slaughtneil and Leinster title-winners, Moorefield, from Kildare, provided the opposition in challenges, and though it might not have gone ahead, an outing with Laois was planned for last weekend.

Twice an All-Ireland winner, Pete McGrath had a scenario similar to next Sunday's ahead of him after he had teamed up with Fermanagh. Down were in the other corner for a league tie, but whether or not this was awkward for him, the Rostrevor man faced the test head and passed it.

He'll have a handshake for the Down manager, one of his former charges, Eamonn Burns, sometime before Sunday's game and again after it. In between he'll be firmly in the other camp, looking for the best possible start to the latest phase in his inter-county career.