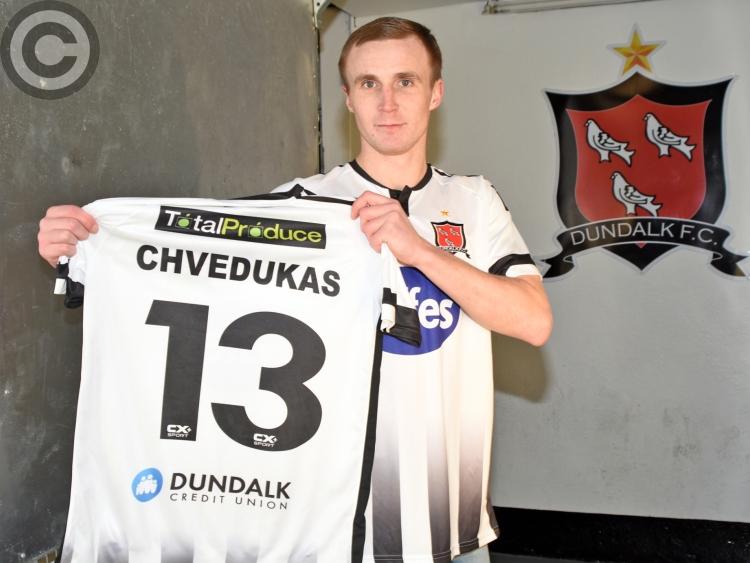 Karolis Chvedukas is hoping “to move forward” in his career having signed a two-year deal with Dundalk FC, in the process becoming the first Lithuanian to join the Lilywhites.

A 19-time capped senior international, midfielder Chvedukas was the second addition to Stephen Kenny’s squad on Monday morning, following confirmation that academy graduate Georgie Poynton had put pen to paper on a one-year extension to his deal.

With Patrick McEleney having departed for Oldham Athletic, Chvedukas is viewed as a versatile replacement. At 26, Chvedukas featured for his country in 2018 World Cup qualifying matches with Scotland and England, while he was also part of the Suduva team that eliminated Switzerland’s FC Sion in the Europa League qualifiers last summer. This following short spells in Croatia and Poland having previously represented his hometown club, Suduva, for six-years.

Coincidentally, the agent who helped broker his transfer was the Scotsman who represented Niclas Vemmelund - the Danish defender who recently departed Dundalk.

Chvedukas was visiting Ireland, where some of his family reside, when interest from the Lilywhites arose.

“I came here just for a holiday to meet my family because it was Christmas and New Year,” Chvedukas told The Dundalk Democrat.

“I was speaking with some agents at this time to find a solution and one guy (Niclas Vemmelund’s agent) helped me with this transfer and then I spoke with Stephen (Kenny) on the phone and he looked at my games. So he told me that he liked how I play. My agent worked on the (deal) and we got a solution.

“I joined because the club play in Europe and I know they play very well in this championship (League of Ireland) too,” the midfielder added.

Having trained with his new team-mates on Monday morning, Chvedukas was in a good position to estimate his fitness with regard to the others, who began their pre-season campaign on Saturday morning.

“I haven’t worked a lot until this moment, but this is pre-season so we have three or four-weeks. The first two-weeks I think are the hardest and today I was training so for me it was very difficult, but the players helped me.

“I can play in three positions. In central (midfield), I can play more defensive and attacking midfield, but it depends on the coach and what the coach needs,” said Chvedukas.

Having been able to rhyme off the names of Cork City and Shamrock Rovers, naming but a few of Dundalk’s Premier Division competitors, it became clear that Chvedukas has a grasp of what Irish football, and, indeed, culture has to offer.

His selection of the number 13 jersey drew some intrigue. He said: “They say it’s unlucky, but I hope they will change their minds.”