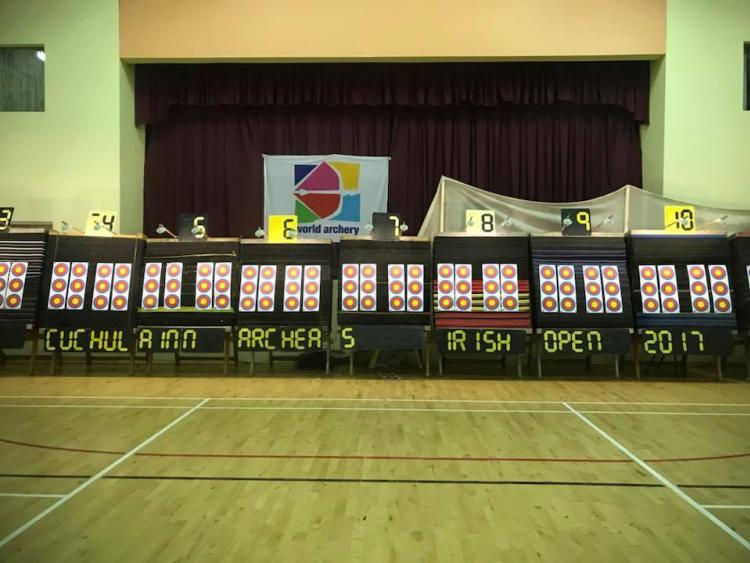 With no venue suitable locally, Kingcourt Community Centre was where they held the event with over 170 archers competing in two fierce days of competition.

The hosts enjoyed much success with Claudia Henize's one-arrow shoot-off victory earning her gold in the Senior Ladies Barebow, while, in the senior males compound, Éamonn Rogers prevailed after an epic shoot-off with Leixlip's Michael Cooney. After the first shoot-off, the pair were too close to call before Rogers prevailed at the second attempt. He was unlucky to lose out in the quarter-finals, though.

For the first time ever in Ireland, a masters team event took place at the Open, with the CúChulainn Archers Masters Team  (John Keenan, Fiachra Judge and Christy Banks) coming second.

Despite being the least experienced team, Cúchulainn's senior men's recurve team of Sergey Parshin, Shay Barry and Brandon Dollard battled bravely before being knocked out on a shoot-off, while the club's women's junior recurve individual category entry, Emily O'Callaghan, qualified in fifth place only to lose out on a shoot-off in the last eight. In the recurve cadet men's category, CúChulainn's Brandon Dollard qualified in fifth and lost out in a hard fought quarter-final match.

The women's compound threw-up some interesting matches for CúChulainn, with Deirdre Rogers, who took gold on Saturday in the Masters, coming up against, and knocking out of the competition, her club mate Adria Quinn. Christina O'Sullivan did the same - after a thrilling match in which Christina shot a Personal Best score - to her club mate Ann Marie Murray. Deirdre, who qualified in fifth, went on to lose out in the bronze medal match.

It was a tough weekend for the members of the club, who, aside from competing, were also the organisers of the event; a task which involved everything from the timing of the individual sessions, to making sure every archer knew just when s/he were due to shoot and which target s/he should shoot. Generally, it was a case of making sure that everything ran smoothly.

Next up will be the Vegas Shoot at Cavan, where members of the club will once again be in competition.