Signing for the Lilywhites is 'the highlight' of the defender's career 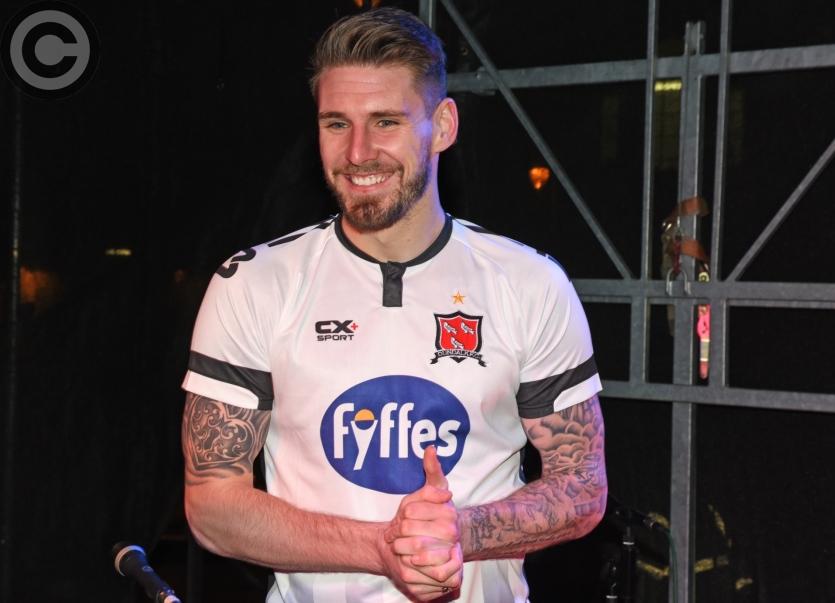 Signing for Dundalk FC is the ‘highlight’ of Stephen Folan’s career.

The centre-half was part of a trio of incomings announced by the club on Friday afternoon and joins the Lilywhites on a two-year deal from hometown club Galway United.

Despite his relatively young age (25), Folan is extremely experienced having featured in over 100 Premier Division games across spells with Limerick FC, Cork City, Sligo Rovers and the Tribesmen – whom he played his final match for in the 4-3 defeat to Dundalk in October.

That result condemned Galway to First Division football for 2018, however, Folan’s performances throughout the campaign clearly left an impression on Stephen Kenny who was quick to get in contact with the former Newcastle United trainee following the season’s conclusion.

Kenny’s first contact came when the defender was on trial at an unnamed English League Two club, and once the Dundalk supremo made contact, Folan wasn’t long in postponing his plans to pursue a contract across the water.

“I was over in England with a League Two team and got a phone call from my agent on the Tuesday,” Folan told The Dundalk Democrat at his unveiling. “He said Stephen Kenny from Dundalk is interested and I said, ‘when’s the next flight’.

“I had heard rumours at the end of the season that he was interested, but you don’t get to speak to managers so I was hoping that the interest was true and once I knew it was, I was over the moon because playing at Dundalk is the pinnacle of Irish football.

“You look at the success they have had over the last couple of years, no one needs to sell you the club or the vision of the club. It’s just a case of ‘where’s the contract and signing there and then.’

“We have been in touch for the last week or two getting everything done, but there wasn’t much that needed to get settled either because it was just a case of getting up here and getting the contract signed.

“I’m absolutely over the moon. It’s the highlight of my career so far and I just hope to God that I can get a good pre-season under my belt and when the season comes around that I can come out flying at the start of the campaign,” he added.

Despite impressing during his development stint with Newcastle, an injury towards the end of his contract meant the Tynesiders released him. He signed with Limerick FC at the age of 21, enjoying a successful stint. Though, later spells at Sligo Rovers and Cork City were disrupted due to personal circumstances.

He admits the death of his father played a huge part in his decision to transfer to Galway United ahead of the 2016 season.

He may have suffered relegation in his second year with the club, though, he feels all the better for him time at Eamonn Deacy Park.

“You’re a 20-year-old lad over in Newcastle and living a very good life. You’re going in training every single day, playing at a high standard and getting paid to play something you love,” he said.

“There’s not many people who can genuinely say that they do what they love and get paid for it so you’re in a very unique position and when I came home it took me a bit of time to get used to not being in the full-time environment.

“It changes your whole lifestyle. I had a great time at Limerick because it gave me a grounding as I was struggling with injuries and, both physically and mentally, I was a little bit down so going to play for them for the two-years I did, it put me in good stead.

“It’s well documented then about my years at Sligo and Cork and why it didn’t work out for me. My father was very sick at the time and he passed away when I moved to Cork. It just didn’t work out for me there and I’ve got no qualms over it, but I went back to the drawing board and decided that the best thing for me was to go home and be around my support network of family and have a right go at it.

“Last year, I had a good season, but this year, even though we got relegated, it was probably my best season individually. We didn’t keep a lot of clean sheets, but you look through the team and there’s so much experience compared to the Galway team. We’re going to be a team who will have the majority of possession which will suit me more.”

In terms of aspirations and targets for his time with Dundalk, Folan wants success and plenty of it. The lure of European football is great, though not as big as his desire to win the league title.

“I’ve got two-years, but you come to a club like this and if you don’t do the business in six-months, you’ll be out the door. I’m at a stage in my career where I’m starting to feel like I’m reaching the potential that I should have reached two-years ago and didn’t.

“I’m very, very hard on myself and I’ll push myself to the absolute limit. I want to challenge myself. I’m 25 now and I’ve been hoping to win the league since I was 21. I’ve won nothing and never played in Europe. For me, coming to my age now and the amount of games that I’ve played in the league, I need to step up and fulfil what potential I have and I think I’m in the best possible environment to do that with the players that are in the group and the manager.

“Obviously, the manager was a big reason for me signing. I can’t think of any player who has signed for him and not improved,” Folan added.