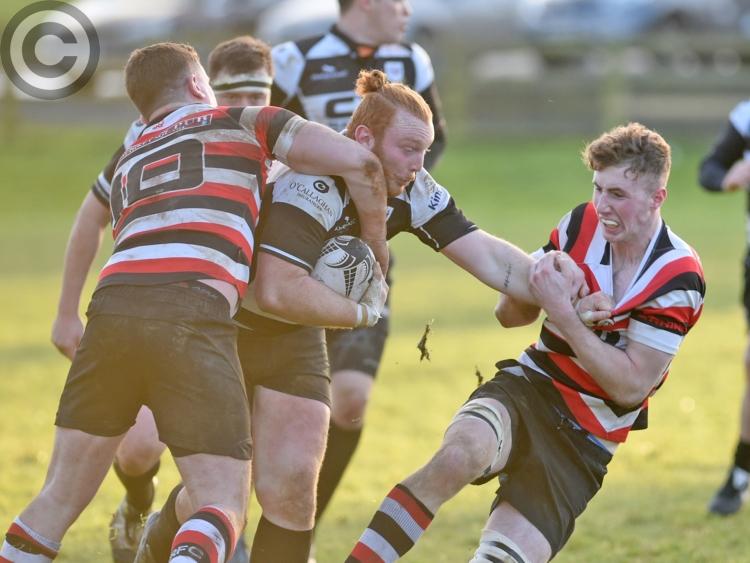 The fact that Dundalk RFC came within one-score of Enniscorthy in this afternoon's Mill Road encounter speaks volumes for their defence. Had Mike Walls’ men been in any way sheepish, Enniscorthy would have run riot.

As it turned out, they were comprehensively beaten, but only on a three-point margin. It would be stretching it to say that they could have won this game considering both of Gearóid McDonald’s second-half conversion attempts skewed off target, but the reality was that had they gone over we may well be glorifying the unlikeliest of ‘smash and grab’ victories.

Dundalk’s defence was excellent and their set-piece was up to its usual high standard, while their attack were clinical when they gained territory and got quick ball. However, for 70-minutes Dundalk were scrambling ferociously to hold the visitors to just the one try.

David Whatley and Alistair McCormack were superb in defence, hurdling themselves at forward runners and delaying Enniscorthy’s phase-build play. They prevented them from scoring until nine-minutes into the second-half when hooker David Murphy eventually fell over the tryline with centre Ivan Poole adding the extras.

One always felt that when Enniscorthy broke the deadlock, thus coaxing Dundalk to throw some more caution to the wind, that they would pull away and win by a pretty sum. Trailing 10-0 after 55-minutes, following a successful penalty stroke from Poole, things looked bleak.

But credit to Dundalk, their heart and discipline was maintained despite a momentary lapse in the latter seeing the aforementioned penalty brought to within a kickable distance. That ultimately proved costly.

However, the 23 penalties awarded in favour of Enniscorthy by match referee Mark Jenkinson was an astronomical total, especially the manner in which he favoured the Slaneysiders at scrum time. Dundalk’s pack was evidently on top, though the whistler continually procrastinated as the hosts drove over the ball and when he did signal it was more often than not to order a reset.

If the referee felt it just to penalise Dundalk so frequently, it begs the question as to why he failed to produce a yellow card rather than speaking to captain Enda Murphy on the two occasions he did. While he wasn’t the difference in the teams, his interpretation prevented Dundalk from relieving the relentless pressure they were subject to.

Straight from the kick-off after Poole’s penalty conversion, Derek Williams rose to fetch possession as if Australian full-back Israel Folau and broke into the ’22. He off-loaded to Tiernan Gonnelly who gained more territory and several phases later McDonald threw wide for Derek Williams to put his brother, Robert, in to open Dundalk’s account.

The score didn’t provide the tonic Dundalk required, though, as Enniscorthy re-took the initiative with a fabulous break from Jim White handing outside centre Daniel Pinn a route to the line, only for the Dundalk defence to scramble and hold the No. 13 up.

Five-minutes from time, Dundalk eventually regained the ball and a burst up the middle from McDonald looked promising, however, great work by Poole meant the hosts’ out-half was penalised for not releasing, and how pivotal that proved as the penalty-winner posted an unassailable eight-point gap by shooting over from 35-metres.

At the other end, Seán Arrowsmith went over for Dundalk at the tail of a hastily moving maul to reduce the gap to three-points, with McDonald again missing the extras.

It offered Dundalk one final salvation attempt and a wonderful chase and catch by Robert Williams had momentum in their favour. However, despite Enniscorthy appearing to converge illegally upon Dundalk’s full-back, Jenkinson deemed Williams to be the guilty-party and awarded Enniscorthy a penalty. It was the final hurrah in an enthralling, if one-sided game of rugby.