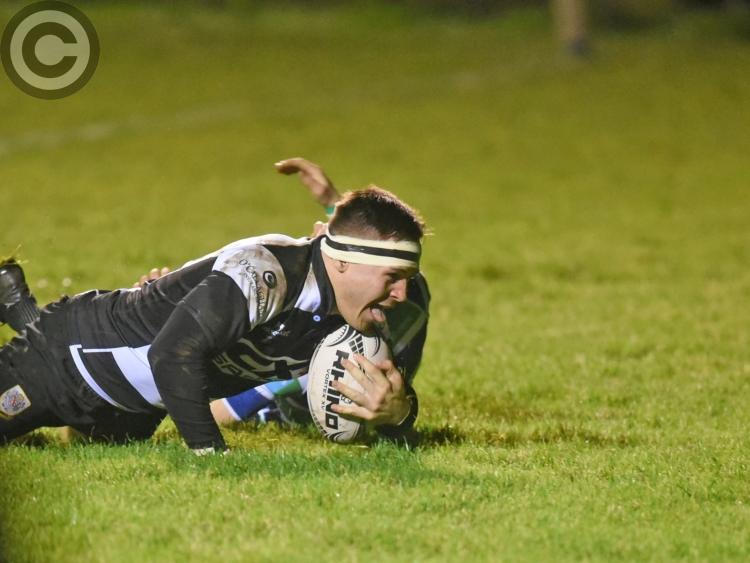 Dundalk RFC rounded off their opening round of league fixtures with a resounding 30-5 victory over Gorey RFC under the Mill Road lights on Saturday evening.

In their most complete 80-minutes of the season, Mike Walls’ men kept pace with table-toppers Ashbourne courtesy of amassing the full five-points on offer. This following the Meath men’s bonus point victory over Monkstown earlier in the day.

Yet again, the platform for Dundalk’s prolific back play was the dominance of their pack and the flawlessness of their set-piece. The line-out has been the source of much of Dundalk’s good fortune this term and it was no different against Gorey who struggled to cope with the aerial prowess of Hamish Walker.

Though they have been equally as impressive in the scrum, where, on Saturday, they frequently powered through, putting huge pressure on Gorey’s half-backs who were often attempting to relieve a relentless siege.

Dundalk crossed once in the first-half with Laurence Steen surging under the posts. Gearóid McDonald was trusty with the boot, converting twice in the opening 10-minutes and prior to Steen’s five-pointer, as the hosts took the initiative from the off.

Gorey’s discipline let them down in the first-quarter. They were penalised seven-times in the period, though they almost made their one and only venture forward count as they camped on Dundalk’s five-metre line. However, sterling work by Walker turned the ball over with Walls clearing the danger.

And within minutes they had added seven-points to their lead and unsurprisingly their power in the scrum played a huge part. Having disrupted Gorey’s attempts to feed the ball out of the pack, a turnover saw Derek Williams make ground into the 22. Tiernan Gonnelly – who made several important bursts – was the next to forage forward, gaining crucial territory and allowing Steen – the next receiver – to crash under the posts. McDonald added the extras.

That 18th minute salvo proved the end of the first-half scoring as Dundalk retired with an 13-0 lead, but not before Gorey winger Tommy New spurned a glorious chance on the left-wing, knocking on with the line looming ahead of him.

Undeterred, the Wexford side got on the board three-minutes into second-half when scrum-half Gareth Bater broke the line brilliantly before setting up substitute Paul O’Connor to finish in the corner. James Nolan may have pulled the conversion attempt across goal, but nonetheless the try put Gorey on the front foot.

However, a wayward kick wasted their 10-minute dominance as Robert Shields gathered and relieved the pressure with a strong run down the left-wing. And his run ultimately began a period in which Dundalk made their superiority count.

Walls burrowed over the line after a sweet move through the hands with McDonald’s conversion his last action as Ultan Murphy was introduced for his first appearance of the season.

Daragh Conroy took up the kicking duties in McDonald’s absence and, despite missing both conversions, Dundalk’s final two tries saw him play a huge part. After the referee overturned a Gorey penalty, Conroy kicked deep into the 22. Walker collected Seán Arrowsmith’s throw and several phases later Robert Williams went over for his second try in two-weeks.

And another Conroy kick to touch gave Dundalk the territory they required to score the bonus-point try. The resultant line-out saw the home side play through the phases, creating an outside overlap. Arrowsmith slipped as Walls’ pass arrived, however, in one spectacular instance, he caught and fed Shields who was bundled into touch.

But Gorey were unable to clear their lines and as Dundalk regained possession, another sweet passing move involving Jonathan Williams and Conroy saw Derek Williams go over, bringing Dundalk’s tally to 30-points and capping off a comprehensive victory.