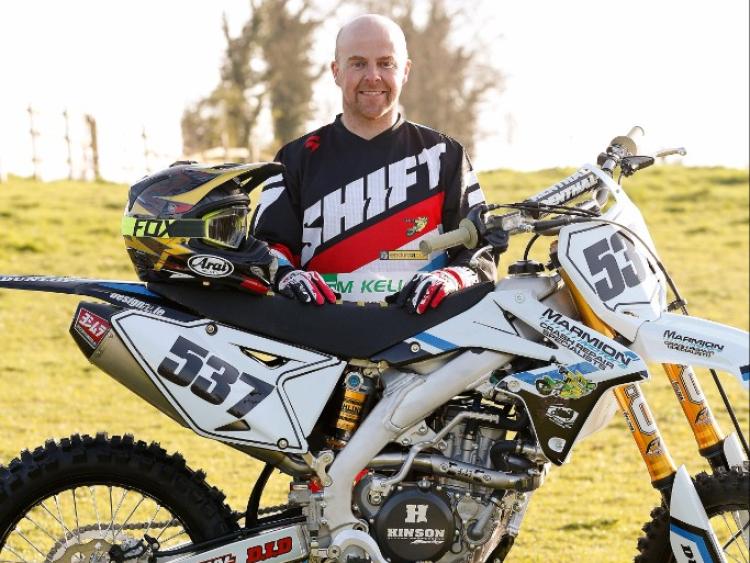 “I was a ball of emotion. Everything just welled up inside me, all the thoughts of the injuries, the hours of work, effort and falls all came together at once. Basically, I stood hugging my Dad for a good 20 minutes, I couldn’t believe it had finally happened. This was an accumulation and it meant so much.”

His triumph was special and meant all his years of toil and recovery were vindicated. Motocross riding is in his ‘blood’, it’s ‘who he is’.

Growing up he knew nothing else as weekends were spent on the national circuit with his father Johnny, uncle Enda, elder brother Martin and cousins. Making his family, particularly his father, proud, as well as exercising the demons of so many ‘nearly’ attempts were important on a personal level. Such feelings contributed to his uncharacteristic outpouring of emotion having completed the final race of the season.

“Anyone who knows me would tell you that in day-to-day life I don’t show much emotion. I went down to Cork knowing the championship was on the line and prepared the way I always prepare,” Kelly told the Dundalk Democrat.

“I wasn’t thinking so much about the championship, but the weirdest thing ever happened, about halfway round the last lap I knew it was a done deal if I finished. I finished third in the race and when I was coming over the last jump, I did a fist pump in the air.

“When I landed, I was dead calm like every other race. I took my goggles off and rode back to the van, and then it completely hit me. My girlfriend, Joanna, and my Dad came over, but I couldn’t talk to them. I was a complete ball of emotion,” he squeaked.

The manner in which Seán spoke, it’s clear he’s still coming to terms with his achievement. After all, this was the prize he perennially chased. Since he can remember, despite his father not allowing him on a bike until he was 14, motocross was his passion.

Burnout was his father’s main concern and while it was difficult to take as a youthful adolescent, he’s grateful for his father’s insistence. He puts his longevity down to that paternal input.

A persistent kind, Seán has chased his dream since beginning on the Grade C circuit in 2000. Though, life hasn’t been plain sailing since. Injuries have plagued his challenge for honours. Indeed, one particular incident threatened life-changing consequences.

“We were over training in England and I’d a massive crash over a jump. Basically, I’d to jump off the bike in the air and I dislocated my knee,” added Seán.

“In the hospital in Doncaster they told me they were going to have to take my leg off below the knee, which,” after a pause, he said “was not nice to hear.”

“I went into the operation not knowing what I was going to have coming back out of it because, as people can relate to with a lot of footballers doing their ACL, a dislocation is two or more ACL ruptures and I basically did all of them in my knee and a whole load of other damage.

“The only thing that was holding the top of my leg to the bottom was skin.

“I got transferred to the Royal in Belfast for four-weeks. I’d four operations and then the major upheaval started. I kept my leg, but I’d to learn how to walk again. I did six-hours of physio a day, seven-days-a-week for six-months before spending a further two-years doing two or three-hours physio every day to get myself back up and running again.

“I’d two very special people with me, the surgeon and the physio got me back together. We did a lot of unorthodox things to get things moving.”

The injury left him out of action for a lengthy period. From his hospital bed, he was forced to orchestrate the day-to-day running of the family’s construction business – JSM Kelly.

But, despite the seriousness of the operation, his objective was to get back racing. He had a bet with his physio that he’d be back on a bike within nine-months, which he achieved with the season past being his third in succession since returning.

“It (the title) was something that I couldn’t leave on the table.

“I would have put in a lot of effort to get a run at this championship. Gary Marmion, who won the B championship, would have been my training partner and we’d have kept each other going the whole year.

“People don’t realise how fit riders need to be, we’d be in the gym four or five nights a week. When I’m sitting on the starting line, my heart rate is up at 140 bpm and during the race would be anything from 180-190 bpm. That’s quite extreme, not many other sports would have athletes at that rate.

“I did a CO2 max test a few years ago and the guy who was doing it would be quite used to Olympic athletes, footballers and pro-cyclists. He wouldn’t have known much about our sport like the vast majority, but he got the shock of his life because when he did the test, he tried to convince me that I should become a pro-cyclist. I was that fit.

“Physical fitness has never been the issue, it was staying injury free. I would have taken a few big hits during the year, a few big crashes, but luckily enough I was able to walk away from all of them. I’d an injury free year and it finally came together for us.”

It took 17 years for it to “come together”. Though, persistency, no matter how fatal the consequences may be, is his style.

“Never giving up is such a huge thing. I’ve had a lot of incidents over the years where I just won’t let go of stuff,” he quipped.

“I’d a broken chain in a championship race one day and normally that’s a DNF where you don’t finish the race or score any points, whereas for me I came in, changed the chain in the space of about five-minutes and went back out to try and salvage some points.

“This year, I rode a full race with a flat front wheel and if you can visualise yourself on a bicycle trying to ride with a flat wheel, I was racing with it for a half-an-hour and hitting jumps at 60m/hr, which is extremely dangerous and stupid when I look back at it, but I knew if I didn’t do that, even at that stage, I wouldn’t have got the championship because every point counts. I lost championships on slender margins before.

“Not giving up would be my moral. I’d a lot of dark seasons and a lot of difficult times, but for me I just kept at it, not letting adversity get in the way and with a single-mind, I had to do it.”

Considering the injuries he’s sustained, the sport could be perceived as highly-dangerous. Though, according to Seán, fatalities are rare. He puts his chequered injury past down to his style rather than the precarity of the sport. A self-confessed ‘force rider’, he explained how his brother would be the more natural rider of the pair, despite Seán’s recent achievements.

“My brother was an extremely, naturally talented bike rider to the point where he used to drive me, and still drives me, mad because he can get up on a bike and can still be competitive having not rode for four or five-years.

“Dad was the same whereas I’m more of a ‘force rider’. That’s partly why I got so many injuries, it didn’t come naturally to me.”

Martin is 10-years older than Seán, while his sister, Lynn, took more of an interest in show jumping and horses. The sport is in the fabric of his family, something which continues to be passed down through the generations. His nephew Eoghan and niece Gráinne McKeever are among his biggest supporters.

Support on a financial scale is less forthcoming, however. Much of his exploits are self-funded. There are some sponsors on board, though they only scratch the tip of the iceberg.

“You do try to get sponsors. We have our own JSM Kelly, hireforklift.ie, Marmion Motors and a few others on board, but they’re only a part of the funding.

“They’re a good boost, but most of it is self-finance and in the 17 years it took me to get this championship, there were some years where I basically couldn’t ride or I could do very little because we hadn’t got the finances.

“I’d to ‘work my arse off' for each of those seasons and build the funds up to do it the next year. I started working with the family when I was 12 and anything that I was earning was going into the Credit Union to pay for what was coming ahead and I’m still the same, ‘most of my earnings would go straight into the racing.

“I still live at home and that’s a part of the reason why, to give me the finances to go and race,” he concedes.

The natural question to then pose would be how much has Seán spent on racing over the years. Is it something that he considers?

“In a word, no. It’s a figure that I’ve neither went looking for nor do I want to look for…,” he quipped.

“I don’t keep a record of it. I’d be quite crafty with my finances with regards to making the budget for motocross, but I don’t tot it up because I don’t want to annoy myself.

“I’m sure I’d be in a nice house somewhere and paid for at this stage with what I’ve put into it over the last 20-years.

“But when you’re doing something for the love of it, money doesn’t really come into it to the point where you need it to be able to go racing. To do it, you have to earn it, hence why I work such long hours. There’s a certain amount of prize money, but it doesn’t punch much of a hole…”

Getting back to the beginning of our conversation, where he outlined his rollercoaster of emotion as his achievement sank in. It’s a feeling that money simply can’t buy. It’s priceless, and something that he’ll hold for the remainder of his days.

For someone ‘not naturally talented’ who had to learn to walk again, Seán’s done ok, one has to admit…