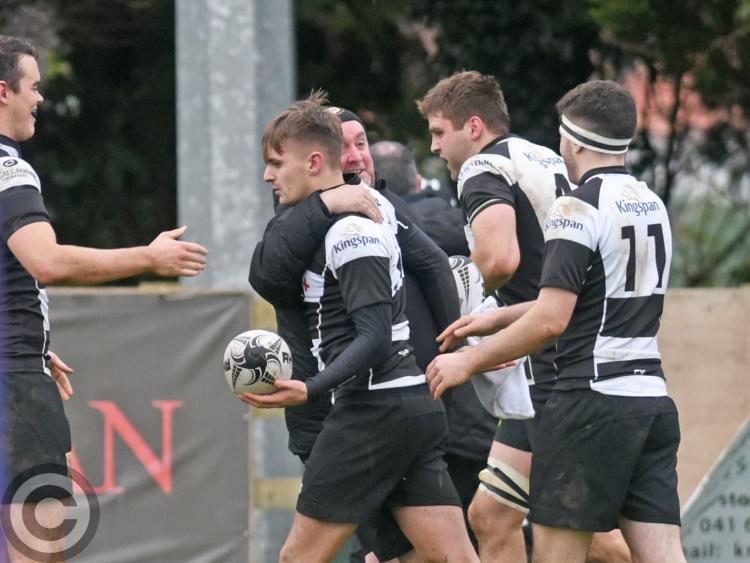 Try-scorer Robert Williams cancelled a pre-arranged trip to Paris last weekend to take to the field for Dundalk’s crucial match with Wicklow at the Mill Road.

Williams crashed over in the closing moments to seal a deserved victory for Dundalk, one which moves them up to second in the Leinster League Division 1A table, and, speaking to The Democrat post-match, he insisted he had no hesitation in cancelling his voyage to the French capital.

“There was a few of us supposed to be going to Paris this weekend, but we cancelled it for the game. That’s the commitment we all have to the club,” he said.

Having been sin-binned just shy of the hour-mark, the general consensus was that Wicklow would have the upper hand for Williams’ 10-minute absence, however, Dundalk battled tremendously to ensure the full-back came back into the fray with the match level.

And he has nothing but praise for his team mates, especially the forwards.

“I was a bit worried, it was a bit of a brain fart in my own case to get put off,” Williams said.

“I tried to grab the scrum-half into the ruck, but I ended up knocking the ball out of his hands so it was a fair call and I fully expected to get a yellow.

“They knocked over the penalty and I was a bit nervous, like you always are when you’re down to 14-men, but in fairness to the lads, Darragh Conroy put in a great kick to the corner and settled the ship.

“We were camped straight on their line for the final 20 minutes and the scrum at the end (where he scored), I said to Mike (Walls), it’s penalty after penalty after penalty, forget about the advantage, I’m on the left so pop it to me and I’ll run the hard line. That’s what we did and we got the try,” he added.

While praising the work of the forwards, Williams also singled out Gearóid McDonald – Dundalk’s out-half – for praise.

“Gearóid had an excellent day with the boot, it was a clean sweep for him and in fairness to him, he’s been at it for the past few weeks like that. Every Tuesday and Thursday he’s out practicing.”

But he’s backed his side to continue their promotion charge ahead of the pre-Christmas schedule.

“Against Ashbourne, we should have beaten them as we were up by 20-points and we thought it was in the bag, but the last 10-minutes, we just let in try after try and when you start leaking the heads are going and you’re doubting yourself.

“But we have put in an awful lot of work in training since and said that we’re going to kick on coming into Christmas. There’s going to be no losses, we’re going to win every game and that started off last week against Monkstown.

“We’re playing Gorey next week which is another big one so we’ll be ready to get into them,” said Williams.