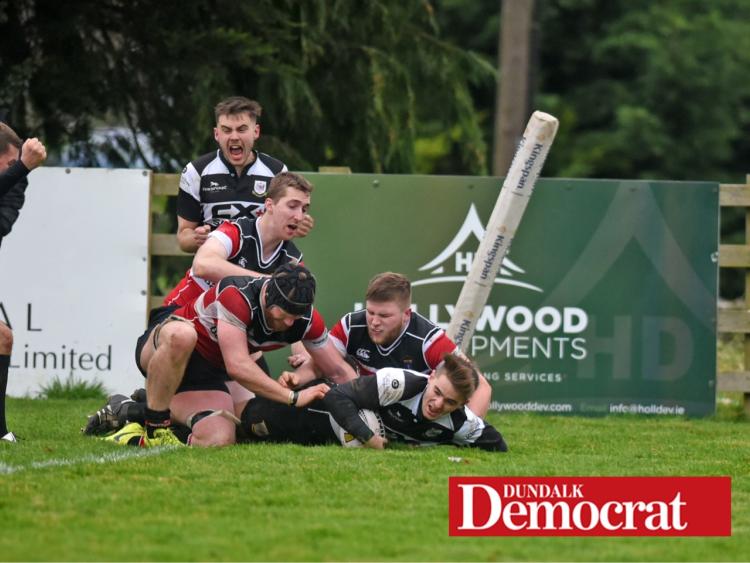 Dundalk RFC picked up their first home win of the season, and moved up to second place in the table, on Saturday when overcoming Wicklow by double scores in their re-fixed encounter at the Mill Road.

Having lost a 20-point lead in their previous home match, eventually losing by the minimum to Ashbourne, Dundalk required victory in this one to keep whatever promotion hopes they harboured alive and they delivered their fourth win of the campaign in convincing style.

Their three previous victories – all away from home – were based on strong play by their forwards and this four-pointer was no different. Mike Walls’ men dominated Wicklow up front with Seán Arrowsmith and Alistar McCormack particularly impressive.

But there was nobody calmer and more composed than out-half Gearóid McDonald who continually took the right decision. Whether opting to kick in behind or keep the ball in hand, the Cooley man was flawless, while also showing himself more than capable in the physical stakes. And, crucially, he was unerring off the kicking tee from four attempts.

The pivotal score arrived three-minutes from time when Robert Williams bundled over in the corner to put Dundalk 18-10 in front, all but securing the victory before McDonald superbly struck over the conversion from tight on the touchline.

It was reward for Dundalk’s excellent final quarter where they pinned Wicklow into their own half despite the loss of Williams to a yellow-card in the 57th minute.

McDonald got the scoring underway in the 12th minute, shooting over a penalty from straight in front of the posts after a spell of pressure on the Wicklow five-metre line.

However, in their first meaningful attack, the visitors took the lead as hooker Jack McKenna bulldozed his way over with the impressive Shane Farrah registering the extras.

But, to their credit, Dundalk battled back, gaining territory and forcing a turnover when Walls caught his opposite number, Dennis Higgins, delaying at the base of a ruck. Several phases later, Dundalk reckoned they were over, however, Williams’ was held up on the ground.

The try wasn’t long in coming, though, as from the resultant scrum, Tiernan Gonnelly, with David Whatley on his shoulder, surged over the line. Gonnelly had started the match brightly, carrying across the gain line on a number of occasions, and the score was his reward.

McDonald converted, making it 10-7 to Dundalk at the break after Wicklow’s Stephen Duffy missed a long-range penalty three-minutes from the interval.

The second-half was practically all Dundalk, however, as has been a recurrent trend this season, they were unable to translate their physical and territorial command into points. Jonathan Gray knocked on with the line at his mercy in their clearest-cut opening.

And affairs looked set to take a turn for the worst when Williams was sin-binned for an illegal dispossession of Higgins as Wicklow mounted their only attack of the third-quarter. Farrah converted the penalty, levelling the match for the first time; 10-10.

Nursing the slender lead, the hosts continued to burrow forward forcing two crucial turnovers, the second of which saw them force several five-metre scrums before eventually Whatley peeled off the back to set-up Williams, with McDonald shooting the extras. Arrowsmith had earlier been held-up as Dundalk piled on the pressure.

The victory was greeted by a huge cheer from the Dundalk line and with both Gorey and Enniscorthy to visit the Mill Road in the coming weeks, Walls and his charges may be in the reckoning for a post-Christmas promotion charge.