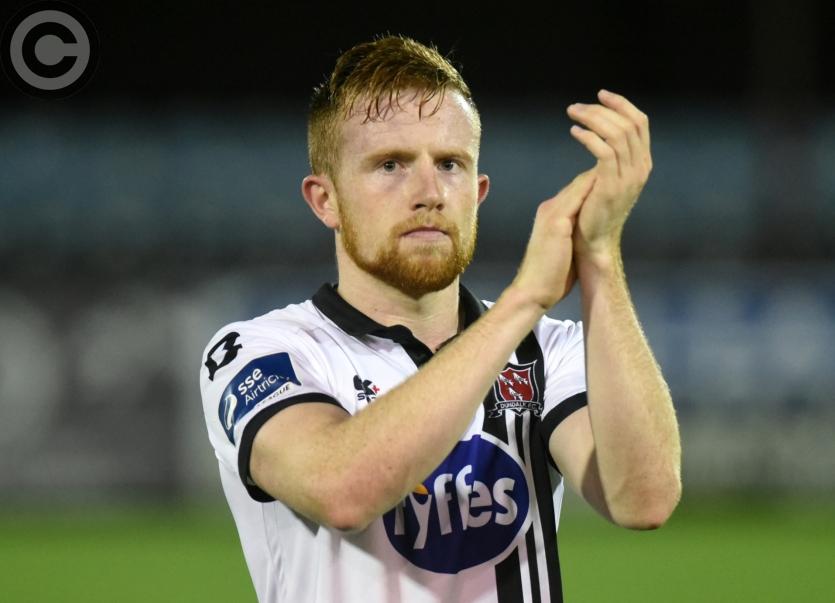 Seán Hoare’s Twitter profile picture has him in esteemed company. He sits second from the left with Lorcan Fitzgerald, Christy Fagan, Conan Byrne and the FAI Cup. The photo was taken after St. Patrick’s Athletic’s triumph in the 2014 decider.

“I just don’t ever think of changing it. A few people have said it to me, ‘you’re a Dundalk player now, you should change it’. I probably should change that, I’ll do it tonight” he quipped.

Hoare was just 20-years-old when St. Pats took the crown. He partnered Kenny Browne in central defence and was flanked by club legends Ger O’Brien and Ian Bermingham. Liam Buckley – St. Pats manager – had an abundance of riches all over the pitch which highlights how impressive Hoare was in his debut season. He nailed down a place from May onwards.

“It was about six-weeks in, I think it was Ken Oman who got injured. I went in against Derry away, I went in and stayed in,” he told the Dundalk Democrat.

Dundalk and Cork City had run away from the rest at the top of the table that season. Having claimed the title the previous season, St. Pats’ championship challenge floundered at an early point. Their 4-1 defeat to The Lilywhites at Richmond Park was the beginning of the decline.

Winning the Cup was a season-salvager, while it also dismissed the elephant in the room for the Inchicore club. Victory ended their 53-season wait on the FAI Cup.

The events of the match are blurry in his head, though Hoare recalls fondly the impact of the success.

“I remember getting booked 90 seconds into the final,” he laughed. “I was walking a tightrope for most of the game.

“We had a good few chances in the first-half, but we just didn’t take them and then nerves as well, neither team wanted to lose rather than trying to go out and win. The two goals we got, you could say they were jammy, one creeped in. It’s just mad, you can’t plan for scoring or conceding them sort of goals.

“I didn’t realise it at the time, but looking back at the picture of that squad, the starting XI was a serious team and if we didn’t win it, it would have been a shambles.

“It was 53-years since Pats had won the Cup. There were a lot of fans who never saw Pats win it. It meant so much to them and you could see how much it meant because they were thanking us for ending that 50-odd year drought rather than saying ‘well done’ or ‘fair play’.”

However, after the success of the previous two campaigns, he sensed the decline was nigh, something which is far from apparent with Dundalk.

“You could see at the end of the 2013 season, Pats won the league by three-points, but you could see how Dundalk were developing and if they kept going the way they were going they’d do what they did in 2014,” Hoare said

“The rate at which they were developing was evident and that meant that it was going to be very hard to retain the title in 2014 for Pats.

“These lads have won it three-years in a row so who’s to say they couldn’t have won it four-times. It’s just the way Cork went, they were unstoppable for 20 odd games. I’ve said it before, with two trophies, everyone would look back on this season as a really successful season.

“I don’t think Cork are pulling away from us in any sense like the Dundalk and Pats situation of a few years ago, we’re still up there. It’s just the way they started, we had to sort of think about Europe and the Cups more at that point at Pats.

“It was tough on us here at the start of the season too. A lot of new players came in and it took us time to get in and adapt. Personally, I found it tough starting off here, obviously not playing every week. I was in and out a bit and now that I’ve got a solid few games under my belt it’s a lot better. It’s got rhythm into things.

“It was definitely a step up in terms of what is expected at the club and that’s why I needed the change and I’ve said that before. Things had gone a bit stale for me (at St. Pat’s) and coming here, it comes from the lads, not just from the coaches and the manager. There’s a lot more expected off you. Everyone’s driven, not that the St. Pats players weren’t, but here the lads are very driven to win things.”

His FAI Cup medal is the silverware he cherishes most. For many at 23-years of age, it would be one of few honours. Though Hoare is perhaps the most decorated of his year in the league. He’s yet to experience a campaign where a medal hasn’t presented itself.

“The FAI Cup medal is definitely the highlight of my career so far. Getting called up to the Ireland U21’s and making my debut for the 21’s were good moments as well, but in terms of silverware, it’s the best thing I’ve done.

“I was in the St. Pats squad for half of the season in 2013, but there’s no way I’d count that (as an honour). I’ve never won the league and that’s something that hopefully when I do win it, might compare to the FAI Cup win.

“It’s always good to finish the season with a medal and winning things has got a lot to do with the standards you set for yourself. You want to be winning things and I’ve been fortunate enough to be in squads where we have been challenging for honours every season.

“With the Pats team the entire time I was there, we were challenging for Cups, if maybe not the league every year. We won two League Cups in a row and the FAI Cup during my time there,” he added.

The 2014 final gives Hoare the distinction of having played at the national stadium. Though the novelty is not lost on him. He admits the Cup final and the Aviva are the talk of his household at present.

“All my family talk to me about anyway is football. Anyone, cousins or friends, when they’re talking to you they’re asking, ‘when’s the final, when is it’ and you get slightly sick of talking about it sometimes. That’s not a bad complaint to have I suppose.

“It’s obviously a big day, there’s a big build-up and it’s a big occasion for the family too. The Aviva is a brilliant place to play because all eyes are on you and that game, it’s the one you want to be playing in. But, that apart, you want to make your family proud as well.

“Hopefully, if we win the final, I’ll be able to update my Twitter picture to a different one, with different players,” he smiled.