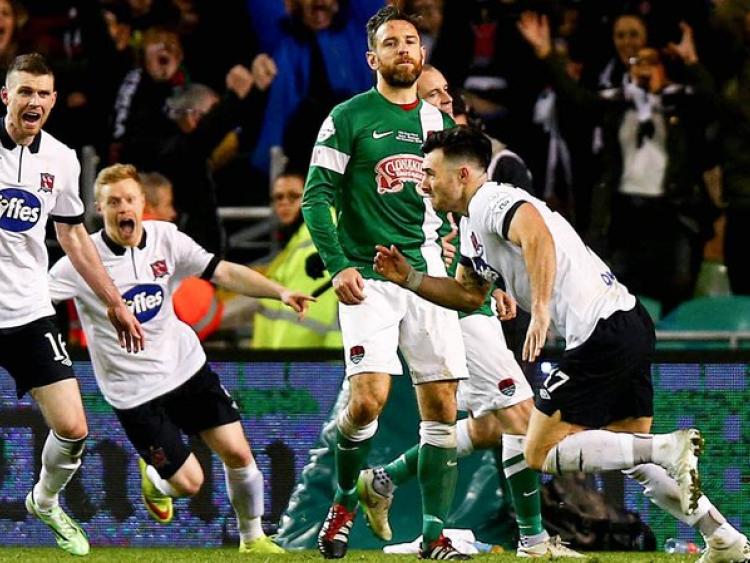 Richie Towell celebrates after scoring the winner in the 2015 FAI Cup final.

The first thing one thinks of when recalling Richie Towell’s dramatic winning goal in the 2015 FAI Cup final triumph over Cork City is Gerry Malone’s commentary on LMFM.

A legendary local broadcaster, Malone’s lyrical twang in commentary alongside Tom McNulty is an archived treasure.

His 28-year association with LMFM came to an end recently, though, considering Dundalk FC runs in his blood following his father’s influence as chairman for many years, there’s hardly anybody better to educate readers on Dundalk’s Cup finals dating back to 1977.

The Democrat sat down with Gerry and asked him to relive his Cup final memories, included was that Towell winner two-seasons ago.

“The most memorable goal I’ve seen, especially in modern times, was Richie Towell’s goal,” he said. "I’ll never forget it.  I was commentating live and we’d gone into extra-time. I remember Daryl Horgan getting down the left-wing and getting the ball in, and as a commentator you have to be on the alert and watching out for everything, but I just saw Richie latch onto the ball and I knew it was going in. He crashed it to the net.

“Another memorable goal was a game I was doing live in 1991 when Dundalk played Ashtown Villa. It was a first-round Cup match and everyone thought Dundalk were dead-certs, and they actually won the league that year.

“They had extra-time at the end of Cup games at that time and the stadium announcer was just ready to signal over the tannoy that extra-time was to be played with the match 1-1, when the Ashtown ‘keeper kicked it out. The wind caught the Dundalk defence completely at sea and Ashtown – who were a junior club – stuck the ball in the net. That’ll live long in my memory,” he uttered ruefully.

The conversation then moved to his Cup final memories, starting with ’77, and as has been Gerry’s way over the years, give him the cue and he’ll tell you all you need to know! Included in his homily was a tribute to still the club’s most revered manager, Jim McLaughlin.

“The 1977 cup final, Terry Flanagan got the two goals. He was a super player that Dundalk signed the year before, he’s won a league winners medal in his first season,” Malone began.

“And then the ’79 cup final was again absolutely outstanding. Seán Byrne put Dundalk in front to complete the double. It was a Dermot Keely/Tommy McConville partnership in defence for Dundalk and Dalymount Park was absolutely packed for the final with Waterford, Dundalk won 2-0.

“The club were on the crest of a wave at that time with Jim McLaughlin, the most successful Dundalk manager in charge, though that will probably change with Stephen Kenny doing the things he’s doing.

“They won it two-years later, but the success was so good that the interest sort of waned by the time 1981 came. They played Sligo Rovers, winning by a single goal with John Archibald scoring the winner. It was an amazing goal down at the school end of Dalymount Park. He took a corner-kick, nobody went for it and the wind blew it in. That was the goal which brought Dundalk the FAI Cup.

“Jim McLaughlin brought the club three FAI Cups, a double included. He was absolutely fantastic and I must say that because what he did was unseen before. But it was six-years after that before Dundalk got back to a cup final, and seven before we won it beating Derry.

“That year, in 1988, Dundalk played St. Patrick’s Athletic over two legs in the semi-final. The first leg was played at Oriel and when the two teams got to Inchicore, the game was still open, but Dundalk absolutely demolished Pats on the day. Between Barry Kehoe and Dessie Gorman, Dundalk were outstanding.

“That brought them to the final, it was a year after they’d been beaten by Shamrock Rovers 3-0 in Dalymount Park and Dundalk went on to win the cup in bizarre fashion. John Cleary scored a penalty after the referee adjudged an infringement on a Dundalk player as he went through.

“That gave Dundalk the double, only the second double in the club’s history. It was a marvellous achievement by Turlough O’Connor and the scenes in Dundalk, well I never saw the likes of it in my life when the team came home with the cup. They had the league and cup trophies on the bus when they arrived back in Dundalk, I think it was about 8:30pm and there were thousands on the town as they came over Hill Street Bridge. It was absolutely fantastic and that’s one thing that I was disappointed with two-years ago when Dundalk won the double. They arrived in town very late and there wasn’t the same sensation.

“Then you go to the cup final in 2002, which was sensational. Martin Murray as manager took Dundalk to their first cup win since 1988, they went out and beat Bohemians, 2-1. Garry Haylock got the two goals.

“It was unbelievable, unreal in the sense that the vast majority of the team were locals. I think there may have been eight or nine locals on that team and David Crawley was captain. As far as I can remember, it was the first time that somebody from the town of Dundalk lifted the cup as captain since, ironically, the club played Cork (Athletic) in 1952.

“I remember John Whyte was playing with Dundalk, you had Cormac Malone, David Crawley, David Ward and Cormac McArdle – who played a short stint with Dundalk. They all came into the school (Christian Brothers) and I remember meeting them and thinking that three or four of the guys with cup medals were on my school team. It was a very proud moment and again when they came home with the cup that night, it would definitely compare with ’88. The reception they got, there were thousands on the streets,” the marvelled.

“But, regarding a game that sticks in my head. Dundalk played Bohemians in the semi-final at Dalymount Park in ‘93, they were 2-0 and came back to win 3-2. Terry Eviston - who would later become Dundalk manager – was an absolute star on the night. They were beaten by Shelbourne in the final unfortunately, but the semi-final is certainly a game I’ll remember for a long time,” Malone assured.

Building into Sunday’s Aviva showpiece, Malone is confident The Lilywhites will win. He will attend the match in a professional capacity as the man behind the ‘Live At Oriel’ twitter page and should one of the Dundalk players score a ‘Towellesque’ winner, where better to relive it than from local soccer’s most familiar voice.