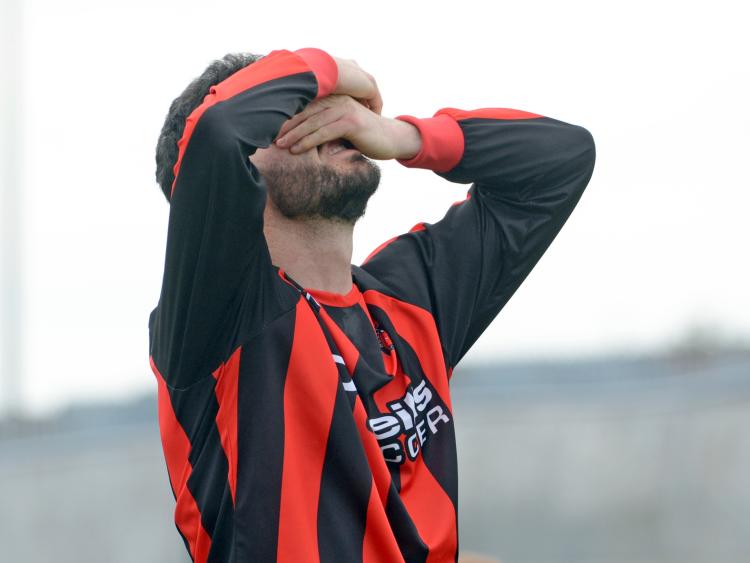 The 20th minute dismissal of 'keeper Robbie Arthur hardly helped the home side's cause, though they battled admirably and on another afternoon they would have converted more of the several chances they created in front of goal.

Indeed, such was the level of the Bellurgan performance, despite the absence of some regulars, manager Wayne Conroy will have selection headaches in the coming weeks as the peninsula side look to build on their impressive start to the NEFL season.

Having missed a host of glorious opportunities beforehand, Bellurgan went in front after 15 minutes when striker Barry Carr swept Shane Finnegan's ball to the net.

However, the match-swinging call came moments later as the referee inflicted double punishment on Bellurgan after adjudging Arthur to have felled a Rivervalley attacker in the box. A penalty was awarded and the 'keeper received his marching orders.

Sub 'keeper Davy McDonald was ushered on in place of his younger brother Daniel, who was having a very good game in his first start for the senior team. Though the custodian wasn't required as the visitors' penalty struck the post and off target much to the delight of the home congregation.

But Rivervalley did equalise before half-time, capitalising on Bellurgan's loss of possession by breaking quickly to score past McDonald.

Conroy's charges emerged for the second-half in determined fashion and despite their numerical disadvantage they looked the likelier before deservingly going back in front when Brian White was picked out at the back post by Ciarán Sheelen and the former Louth GAA player finished superbly.

The home side looked comfortable and when Stephen Finnegan sent in a wonderful free-kick in a subsequent move, Carr found himself alone in the six-yard box, but the attacker somehow failed to score.

And the miss was to prove costly as Rivervalley levelled with 10 minutes to play. Bellurgan 'buckled' somewhat thereafter. Unable to recover mentally from the concession, the visitors won the match as full-time approached. A routine ball into the area wasn't properly cleared by the Bellurgan defence, it fell to McDonald whose attempted clearance rebounded off the back of one of his own defenders and into the net.

It was a real blow for the 10 men who had worked really hard to grind out a result in the circumstances.