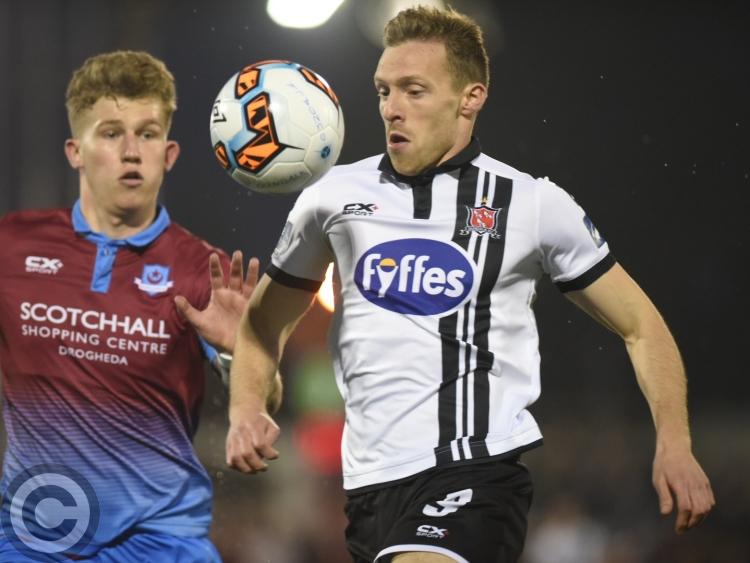 The result - Dundalk's ninth victory in a row - ensures The Lilywhites' slim title hopes remain alive and a victory over Cork City on Monday night would cut the Leesiders' league lead to eight-points. Though, withstanding a dramatic end of season run, John Caulfield's men remain the champions-elect.

Another inevitable outcome is Drogheda United's relegation. This result, inspired by Kinsella's goal late in the first-half, helps the Boynesiders closer to the First Division. And to compound matters, Thomas Byrne received a second yellow late in the game - his second dismissal against Stephen Kenny's men this season.

Kinsella granted Dundalk a one-goal half-time lead. The winger - who would be later replaced by Duffy through injury - followed in after McMillan's header had been saved spectacularly by Stephen McGuinness, to score his first league goal for Dundalk.

The strike came at the end of a disappointing opening-half whereby the visitors had the clearest-cut openings. Firstly when Brian Gartland was forced to clear Shane Elworthy's shot off the line before Gary Rogers was made palm to safety having been caught in no mans' land by Byrne.

And, punishing those misses, Dundalk doubled their lead on 52 minutes as McMillan guided Seán Gannon's cross past the helpless McGuinness.

Thereafter, the traffic towards the town end goal - attacked by Dundalk - was relentless with Connolly, Duffy and McMillan forcing the visiting custodian into action before Duffy teased home the third goal on the stroke of the '90.

To Cork The Lilywhites go...