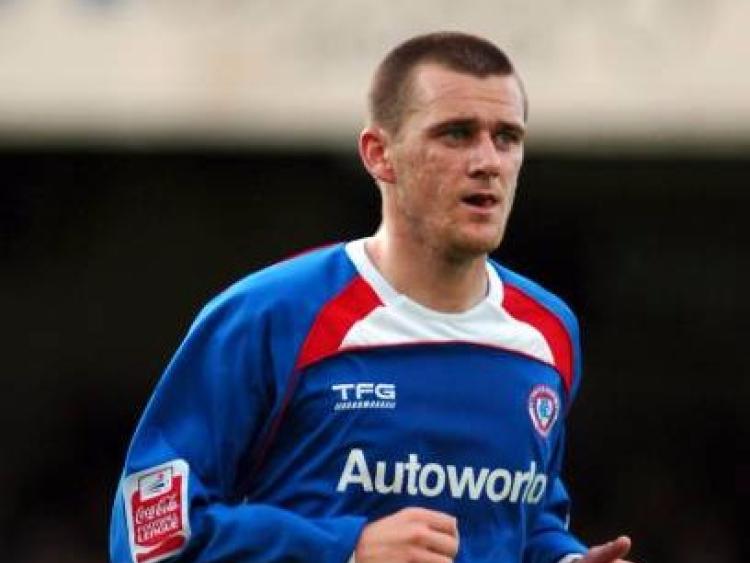 For Part One - 'Growing up and move to Wolves' - click here.

Part Three - 'Magic of the Cup'

Colin’s time in the Football League was to continue for six more years with stints at Chesterfield, Northampton Town and Hartlepool. He enjoyed a career highlight during that period, Chesterfield’s memorable Carling Cup run of 2006/07, where he scored in games against West Ham and Charlton Athletic.

Two-weeks after exiting the League Cup to Charlton, they were knocked out of the FA Cup by non-league Basingstoke. “It was an embarrassment.”

They were forced to run around the town where “all the fans could see us” as punishment. It was another embarrassment and “a bad way to treat us.”

Now player-coach with Sunderland RCA in the ninth tier of English football and coach of the Sunderland college teams, Colin acknowledges the importance of talking to your players and allowing them, especially the younger ones, to learn from their own mistakes.

While he reluctantly calls it as such, there was a “bullying culture” at some of his clubs where “name calling” was prevalent.

“With some of the managers and coaches I had, you felt it was about them and their authority, ‘I’m the coach and you’ll do what I say’ sort of thing, when a lot of it is about how you speak to players and if a guy is left out of the team on Saturday, how you go about telling him.

“No player likes to be dropped without an explanation so I like to pull fellas aside if they’re not in the team and explain why. I just think it’s the right thing to do, but it wasn’t always the case in teams I was in.

“It’s about pointing players in the right direction and hoping they learn from their mistakes because you can’t hammer them or start name-calling. I’ve seen lads and coaches having a go at younger guys and you’re like, ‘well, they’re only young lads, give them a bit of encouragement. They’re still learning their trade.’

“At the same time, I’ve been fortunate to work under some really good coaches and managers. Whenever I see Keith Curle, I don’t see him as much anymore, I still call him ‘gaffer’.

“Roy McFarland at Chesterfield was one of my favourites, he was just like a father figure to me. He was a hard man and you wouldn’t get on the wrong side of him, but he’d a good knack of getting the best out of players and really making you feel that you were the best player on the park.

“I haven’t seen Roy in years but I’d still call him ‘gaffer’ and that’s just the respect you have for these guys who were good managers and who you played your best football under.

“Mick Wordsworth too. He was my last manager at Hartlepool and had he not got the sack while I was out injured, I’d have probably been given a new contract at the club.

“I speak to Mick every so often and any time I see him face-to-face, he’s still gaffer. They’re the three guys in my career who I don’t work for anymore, but they’re still the boss, the gaffer and they’ve been the main men.”

Perhaps the most telling move of Colin’s career was the switch to Gateshead in 2013. It meant settling back in the north-east after stints with Lincoln and Harrogate. The father of two children, the north-east has become his home. It’s also something that proved off-putting when the chance to move to Dundalk FC arose in 2011.

“I would have loved to have gone back and played with Dundalk. It’s not a regret that I didn’t, but all my friends and family still go up to Oriel Park so it would have been great to have gone back to play in front of them and hear them cheering you on or shouting abuse…

“I remember I was at Hartlepool, Ian Foster was the manager at Dundalk and we had a chat. It was mid-season in Ireland and that put me off. I was home for a weekend and I went to watch a game. I spoke with Fozzy (Ian Foster) afterwards and he left it with me, but had I taken the offer, I’d have gotten three-months of football and I then would have been sitting doing nothing for November and December.

“I decided against it and looking back it was probably a good decision because Ian didn’t last too long after that and with family life and being settled over here, I never got ticking it off the list, but it was something I’d have loved to have done.”

Back to his stint with Gateshead, a stint which Colin describes as being “a funny one”, particularly for the way it ended.

“It was a funny one because I loved playing for Gary Mills. Gary wasn’t the manager who I’d signed for but he watched me play and he couldn’t believe how fit I was. He told me how I was one of the fittest players he’d ever seen not long after he came in.

“I got a double hernia from Christmas onwards, and they kept asking me to play on it, which I was happy to do, but it got to the point where I was really struggling, coming off at half-time and that. I would do really well for 45 minutes, put myself about and maybe nick a goal, but I was really in agony, I couldn’t even run.

“The club gave the green light for the operation with about four-weeks of the season left, but I managed to recover and get back for the final two games, both of which I scored in, and in the play-off semi-final I scored to make it 1-1 at Grimsby. We won the second-leg and got to Wembley.

“But I didn’t do myself justice there. I got taken off early because my groin was at me again, it probably hadn’t healed by the time I’d come back so there was me again trying to play when I should have minded my body better.

“But I just wanted to play in the games and it put too much stress on my groin. I knew I was going to have to have a groin operation over the summer, however, the club came to me at the end of the season and said they couldn’t give me a new contract because of ‘fitness issues’.

“I just thought ‘Gary had told me that I was the fittest player he’d ever seen and now I’m not fit enough because I kept playing for them through injury’. I didn’t argue with them, but I was gutted because I felt I’d unfinished business with not getting the team promoted and I knew it came as a big surprise to some of the other lads.

“They felt I was a ‘dead cert’ to get a contract but I suppose, looking at my age (32), did it play a part? It might have, I don’t know, but it didn’t work out for them the following season and speaking to some of the players, they felt I was a miss. Not just on the field, off the field we had quite a young team, with the likes of Marcus Maddison and James Marwood, and I was no longer there to give them a quick chat before a game or help them out in training.

“They were still just young lads who had enjoyed amazing seasons.”

The final edition in our series, Part Four - 'Wembley tears' - will be documented tomorrow evening.