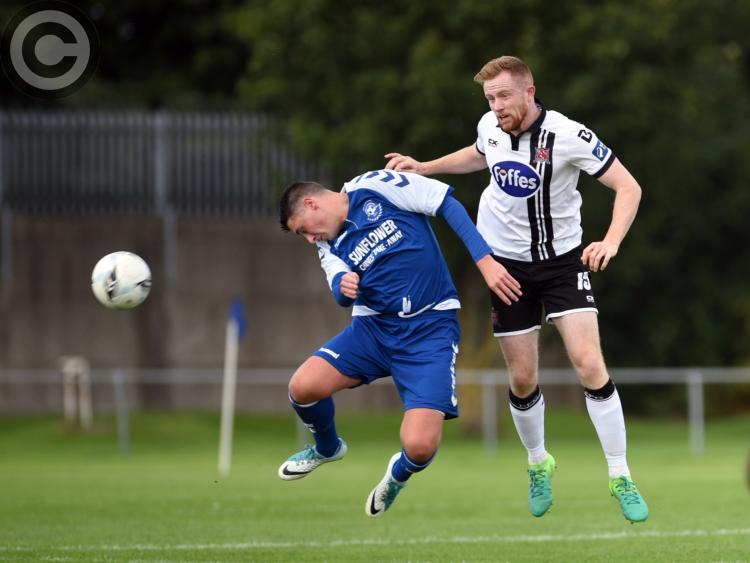 Dundalk booked their place in the Irish Daily Mail FAI Cup quarter-finals with a comfortable 3-1 victory over Crumlin United at the Iveagh Grounds this afternoon.

Despite dominating the match, Dundalk offered Crumlin glimpses on goal, particularly early on where former Lilywhite Ger Rowe came close with a snapshot.

McMillan handed Dundalk the lead on 19 minutes, giving Crumlin 'keeper Michael Quinn no chance with a header from four-yards.

However, a goal from Jake Donnelly drew the Leinster Senior League side level. After Chris Shields was adjudged to have fouled Dean Hurley on the edge of the area, Donnelly shot over the Dundalk wall and past the rooted Gary Rogers.

Hoare reinstated The Lilywhites' half-time advantage, though, with a sweet strike from 30 yards.

The second-period was again dictated on the visitors' terms with McMillan having a close range effort save by Quinn, while Hoare headed inches over from another pinpoint delivery from Duffy.

It didn't look as if an assurance strike was ever going to come for The Lilywhites, especially when McMillan's penalty was superbly saved by Quinn.

Before second-half substitute Kinsella secured the victory one-minute over time, connecting with Duffy's backpost delivery to drive to the corner of the net.