Meath and Down the others on board 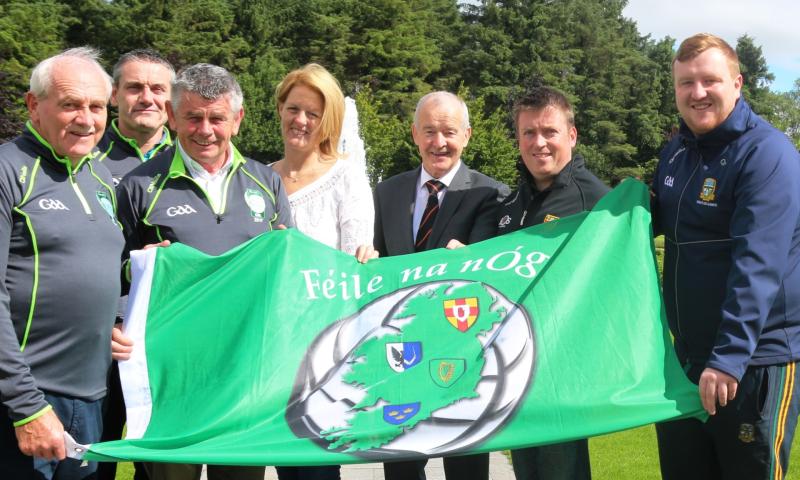 Ulster GAA handing over the Féile flag to Meath, Down and Louth GAA.

Féile Peile na nÓg will be held in Down, Louth, and Meath in June 2018.

This will be the first time that Down and Louth have hosted this festival of Gaelic Football, while Meath hosted the event in 1991 and 1992.

Recognised as one of the most important events in the GAA calendar, the Féile Peile na nÓg weekend for Under 14 boys and girls will see over 240 teams and over 6,000 players playing over 600 games over a three-day period, concluding in 30 finals.

Teams from every county in Ireland will descend on Down, Louth, and Meath on Friday the 15th June and will be playing across ten boys and five girls divisions.

There will also be Under 14 teams representing New York, San Francisco and Philadelphia as well as teams from around Britain supplying an International dimension and further illustrating the growth of Gaelic Football internationally.

Member of the National Féile GAA Committee and Chairperson of the Local Organising Committee Diarmuid Cahill feels that Féile will leave a lasting legacy to all three host counties.

‘Féile is special and is one of the best weekends in the GAA calendar,” Cahill said.

“The festival of Gaelic Football is about young people celebrating their love of Gaelic Games and having fun.

One of the major elements within Féile is that players from the visiting teams will stay with host families and host clubs across Down, Louth, and Meath.

Any GAA and/or LGFA club in Down, Louth, and Meath looking to take part in Féile Peile na nÓg 2018 and to act as hosts have until 15th September to return the application form.

Féile Peile na nÓg will take place across Down, Louth, and Meath between Friday 15th and Sunday 17th June 2018.

More information on Féile Peile na nÓg 2018 can be found at www.feilepeile2018.com or on our social media platforms @FeilePeile2018.