The 24-year-old collected five-points from a possible six 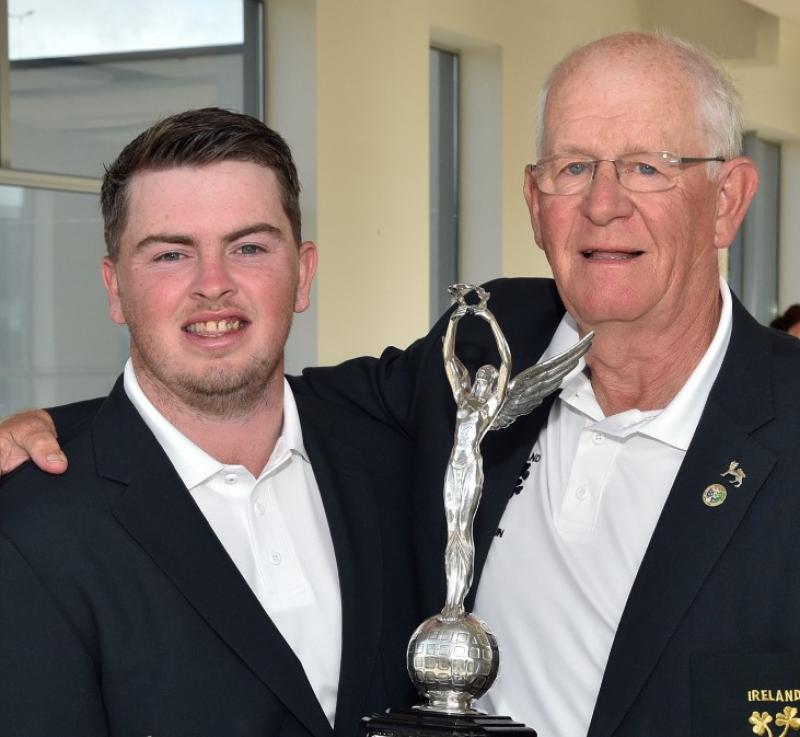 The 24-year-old Dundalk Golf Club player finished as Ireland’s top scorer with five-points out of a possible six from the matches against Wales, Scotland and England.

“It was the best week I have had in golf in a long time,” said Rafferty. “To do something as a team was great but to perform as well as I did was extremely satisfying.”

Rafferty had never previously been capped by Ireland at any level and, while he was being tipped for call-up this year, he admitted that he was nervous in the lead-up to the team being finally announced even though he had won the silver medal for leading qualifier at the British Amateur and North of Ireland Championships and reached the last 16 at the British.

He also reached the last eight at the West of Ireland and the semi-finals of the North as well as leading Leinster to the third successful Inter-provincial title.

“Others boys who were on the fringes did well at the South so I was a little bit apprehensive. I knew they were going for four-in-row and there wouldn’t be many changes to the team so it was nice when the phone-call came although it was hard keeping it quiet for a few days until it was officially announced. It’s been a goal of mine for some time to play for Ireland.”

The Home Internationals involved five foursomes matches each morning followed by 10 singles matches and for Ireland’s opening tie against Wales, Rafferty was partnered with Conor Purcell but they lost 2&1 after getting off to a slow start and finding themselves trailing early on.

“At the team meetings we spoke about the need to get out fast and get up early. Because the standard is so high it is usually one or two small things that decides it.”

Ireland lost the foursomes 4-2 to Matthew Harris and Lewys Sanges so going into the afternoon singles the pressure was on to keep alive their hopes of becoming the first team ever to win four successive Home Internationals titles.

Playing against Jake Hapgood, Rafferty got ahead on the first hole and played steady golf to eventually win 3&1 and pick up his first international point. His team-mates had also bounced back from the morning disappointment and Ireland took the singles 7-3, for an overall 9-6 victory.

The following day against Scotland, Rafferty was paired with Colin Fairweather in the foursomes and it proved to be an inspired choice by team captain Tony Goode as they won 3&2 against Craig Ross and Sam Locke and helped Ireland into a 4-1 lead.

Rafferty and Ross met again in the afternoon singles with Rafferty coming from behind to win the last two holes and win by one hole. Ireland won the singles 6-4 and the overall match 10-5.

That set up a showdown with England for the title with the Irish only needing a draw because of their superior point difference.

Playing against Jack Gaunt and David Hague in the foursomes, Rafferty and Fairweather found themselves three down early on but fought back to win 5&3 and give the Irish team a massive lift as they headed into the singles with a narrow 3-2 lead.

“It gave everybody a big lift because a lot of the lads thought we had lost. I have played a lot with Colin over the years and we get on well. We just went about our own jobs and also helped out one another. It was so laid-back we were never flustered.”

With so much on the line, the singles were nail-biting as Ireland looked for the 4½ points they needed to take the title. They got there thanks to three halved matches and three wins with Rafferty delivering one of those victories by beating David Hague 4&3.

“I was two down through three but then I got to work and won four of the next five holes to go two up. After that it was just a case of hitting fairways and greens and keeping him under pressure.”

Rafferty has been inundated with messages of congratulations all week but the texts he was constantly receiving from his father Ciaran were particularly special.

“He been a huge influence on me. It would have been lovely to have had him there but it was nice to know he was following it all at home. My family have been very supportive as has my girlfriend Hayley. They’ve had to put with a lot!

“I’ve also had great support from Dundalk Golf Club and all the members. The club linked up with DKIT at the start of the year to provide fitness training for the elite squad members. It wasn’t something I’d done before but every little bit helps.”

One of the messages he received was from a Dundalk golfer now living in Galway who took the opportunity to congratulate him and offer him the use of his locker at Galway Golf Club where this week’s Irish Close Championship is being held.

That’s the next target for Rafferty before he heads to Colombia for the South American Championship with Tiarnan McLarnon as part of a two man Irish team. Then he’s off to Maynooth University to commence a Business Management course having received one of the Paddy Harrington Golf Scholarships which were set up by Major winner Padraig Harrington in memory of his father.

However, his first week of college will be spent in Prague at the European University Championships before he returns home to defend the Dundalk Scratch Cup he won for the first time last year.

It’s been a season to remember for Rafferty and there are still plenty of opportunities ahead to make it even more memorable.