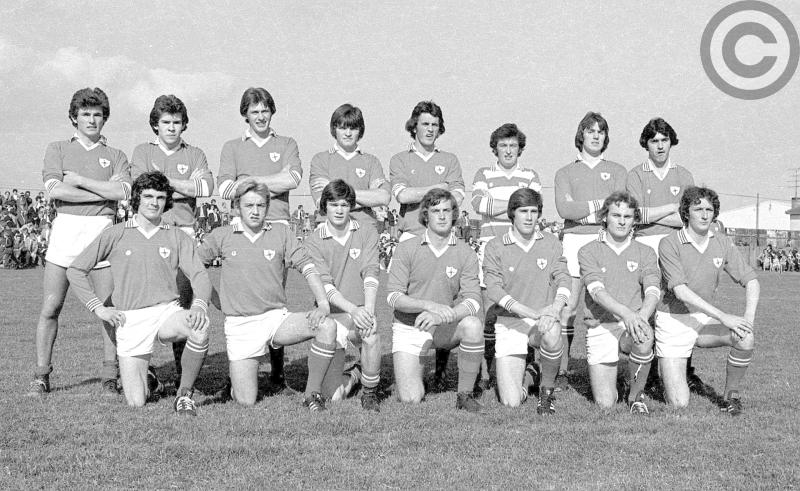 The excuses for it happening have been varied; three times a Kerry team has refused to fulfil important championship matches with Louth on their original dates.

The counties' minors face each other on Saturday in a championship quarter-final. It will the third such meeting, and the first since 1936, the year in which Louth won the first of its two All-Ireland titles, beating the Munster champions in the final by 5-1 to 1-8.

This was a triumph that owed much to the tactics devised by chief mentors, Fr Larry Murray and Seamus Flood.

The idea was to keep the ball on the ground as much as possible, and not give the green-and-golds the chance to display their aerial skills.

The result was Teahan, the Kerry goalie, having to pick the ball out of the net five times and those in front of him getting into a tangle as they tried to keep tabs on the dribbling Louth forwards.

Could the J. Keohane who lined out at right-half-back for Kerry be the Joe Keohane who went on to become one of the Kingdom's full-backs, winning several senior All-Ireland medals, and the T. Lyne and W. Casey, the same Tadhgy Lyne and Bill Casey who also received the game's greatest prize?

Five-years earlier the counties were scheduled to meet in the All-Ireland final on September 6, but Kerry refused to travel.

This was a reminder of what had happened in 1910 and the forerunner to 1978, when, three or four days before the Gaelic Grounds in Drogheda was set to host an All-Ireland under-21 semi-final between the two counties, word came from the Kingdom to say the green-and-golds wouldn't be travelling.

Let's put 1910 and '78 on the back-burner for the time being, and first take a look at the 1931 minor semi-final, which went ahead, but not on the date the fixture-makers had ear-marked.

Louth, playing in a grade that had only been introduced to the GAA calendar two-years earlier, were good in the Leinster championship, beating Meath, Dublin and Westmeath, before ousting Wexford in the semi-final, played at Croke Park

John Harlin's first-half goal was crucial as the young Reds made it to the All-Ireland final on a 1-5 to 0-3 scoreline.
Drogheda's Gaelic Grounds - which had hosted an All-Ireland senior semi-final four-years earlier, Kildare beating Monaghan in a prelude to their first-ever title-win - was the setting for Louth's meeting with Tyrone.

Having led by 2-4 to 1-2 at the interval, Louth defended well to survive a late Red Hand rally.

Kerry came through from the other half of the draw, beating Cork in the Munster final and Mayo, the title-holders, in the All-Ireland semi-final.

Tremendous interest
The final, scheduled for Croke Park on September 6, created tremendous interest in these parts. In its preview, the Democrat said the Louth team would travel by train, setting out from Dundalk at 9 o'clock on the morning of the match, and calling at Drogheda to pick up the players based in the south end of the county.

It didn't say if there'd be a stop at Dromin Junction or Dunleer.

The paper's GAA man, writing under the name of Padraig - 'Sideliner' covered soccer affairs – had his pencil and notebook ready in anticipation of something that was entirely new to Louth followers.

His preview had all the appearance of having been written by a supporter as much as a reporter.

The county had been involved in four senior All-Ireland finals and one at junior level, but this was a first for the under-18s.

Understandable, therefore, was the buzz about the place. On the the following Saturday, however, Padraig's story wasn't centred on the game, but on it not taking place. Kerry had refused to fulfil the fixture, and it wasn't until very late on that Louth were informed.

“Hundreds of people thereabouts suffered a big disappointment when it became known here on Saturday morning that the All-Ireland Final between Louth and Kerry Minors had been postponed. On Saturday, nobody knew the cause of the postponement, all sorts of rumours being spread. That which was generally accepted was to the effect that Mayo had lodged an objection against Kerry for their team in the semi-final. This did not turn out to be true.

“The fact is that Kerry claimed that they had not been given the requisite seven days' notice of the fixture. They were entitled to a week's notice, and as they had not got it they stuck to their rights.”

'Padraig' wasn't critical of Kerry. Quite the opposite - he had sympathy with them.

“It does seem strange that Kerry should do a thing like this, which, on the face, looks a very unsporting action to call off an important final which everybody knew was being played.

"But there are facts that should be stated in fairness to Kerry. One is that some of their players did not arrive home from the Mayo match until Tuesday, and another was that, not knowing the final would be fixed within a week of the semi-final, there were important (club) championship games to be decided, and in many of these the Kerry minors were engaged.”

On the tear
The impression might be that the young Kerry blades went on the tear, but, as Padraig explains, it had probably to do with the mode of transport laid on for them.

“In making their case for their refusal to travel last Sunday, Kerry set out all the facts, and further stated they were willing to play Louth at any time and at any venue. This is certainly sporting.

“We here is Louth, with splendid rail facilities and with a road transport service that makes the distance between any part of the county and another (neighbouring one) a mere matter of an hour's journey, can hardly appreciate the difficulties which they have to encounter in Kerry in the way of travelling.

“A match which necessitates three days away from home – as apparently the Mayo game did for some of their players – is not to be looked on likely.”

Padraig celebrated the fact that the final was now to be played in Drogheda. Louth had claimed the title, but the GAA Central Council saw that Kerry had a case and refixed it for September 20, giving Louth home advantage.

“Surely we (Louth) are getting every chance to win this All-Ireland final,” Padraig enthused.

The final, watched by a crowd of 5,000, made history in that it was the first in an All-Ireland series to be played outside Dublin. Kerry won, and didn't so much as beat Louth – by 3-4 to 0-4 – but, in the words of Padraig “whack” them.

“They whacked our lads till those of us who would have liked to have seen this championship coming to Louth openly admitted that it would be a pity should Kerry have been beaten.”

It's not known how long it took the Kerry lads to get home, but, according to Padraig, the journey to Drogheda was undertaken on the day of the game, and it didn't take a fidge out of them. “Following a tedious journey from Kerry, they arrived at the Gaelic Grounds looking as if they had come from Laytown, and, if necessary to add, finished equally fit.”
Jim Tiernan, grandfather of the O'Hanlon brothers, Kevin, Seamus, Cathal and Brian, championship medal winners with Clan na Gael in the 1980s and '90s, was at right-full on the Louth team, which, the Democrat tells us, was selected by Ardee St Mary's, presumably because they had won the previous year's county minor championship.

Travel was at the core of Kerry's refusal to play Louth in the 1910 All-Ireland senior final.

This repeat of the previous year's final, which Kerry won by 1-9 to 0-6, was scheduled for Jones' Road on November 13, but Kerry became embroiled in a dispute with the Great Southern Railway Company and the game was called off.

Excursion rates
Kerry had requested the facilities they'd been afforded the previous year - a reserved carriage at excursion rates for the team, some officials and supporters. Having initially blankly refused, the GSR said they'd provided the cheaper rate for 17 players, three substitutes, but no-one else. Kerry, however, were having none of it and the game didn't go ahead. On the day after the scheduled date for the final, Joe Ward, the Louth Co. Board chairman, after whom the county's principal trophy is named, sent a telegram to the the Dublin evening papers saying that Louth would be willing to travel to Cork or Tralee to play the game.

However, this offer didn't meet with the approval of the current Louth champions, Drogheda Tredaghs. They felt they should have some say in the matter, and in a letter to the evening papers, said the game should go ahead in Dublin. The Central Council, having devoted a number of meetings to the issue, eventually decided on a vote – by seven to 6, with Joe Ward among those who abstained – to give Louth a walk-over. September 10 was the date set aside for the 1978 All-Ireland under-21 semi-final.

Louth, winners over Offaly in the Leinster final, were well prepared, taking training ground instructions from Frank Lynch, and though the Kerry team would include a number of players who had taken part in the previous year's epic senior semi-final with

Dublin, there was huge confidence behind the Reds; interest in the game was razor-keen.

It can only be imagined the disappointment there was in these parts when word came through in midweek that Kerry wouldn't be heading to Drogheda.

Their seniors were due to play Dublin in the senior final in a fortnight's time, and Mick O'Dwyer wasn't willing to risk the likes of Jack O'Shea and Eoin Liston in the under-21 match.

Louth were awarded the match, but at a special Co. Board meeting, delegates rowed in behind Frank Lynch, who, in his role as chairman, argued that the game should take place.

Going for a fourth successive All-Ireland title and having encountered few difficulties in getting this far, the odds are clearly stacked in Kerry's favour for Saturday's match. You probably wouldn't have to go far to find someone to say they hope this is another fixture the Munster team swerves. But whatever the result, the Louth lads should take as much from the outing as they can.