Did you know Dundalk had a world top-800 tennis player?

John McGahon reflects on life with a racket in hand 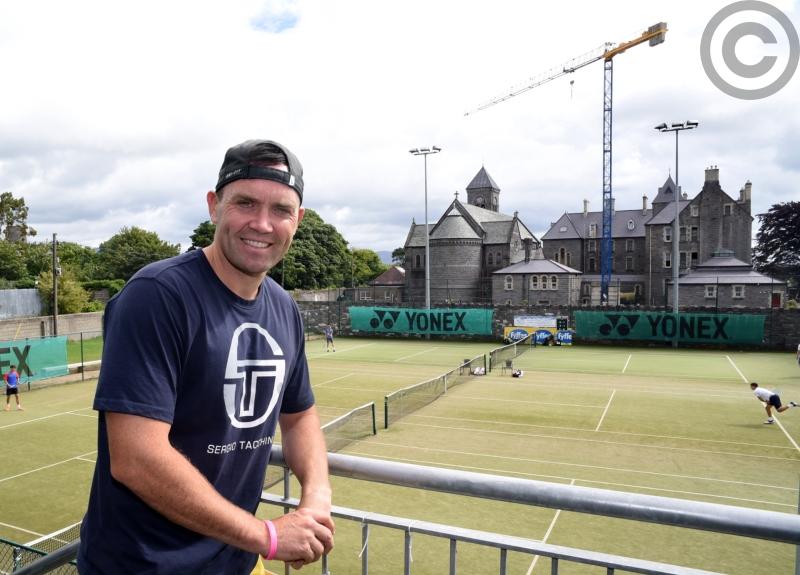 When you consider the sporting alumni from Dundalk, you automatically find yourself thinking about Steve Staunton, Paddy Keenan, Rob Kearney, etc.

Unfortunately, John McGahon is neither somebody who springs firmly to mind or a sportsman who has gotten due recognition for what he has achieved, and for what he continues to bring to Irish tennis.

At the peak of his professional career, McGahon was a top-800 international tennis player, a man who amassed several Davis Cup caps for his country and a person who typified what it is to play for the love of the game, monetary convictions aside.

“I would have played a lot of sports, mostly football and tennis, growing up in Dundalk, but I just ended up growing a strong love for tennis and it sort of took over,” he explains.

“I was 11 when I started and I just developed a deep love for the game, for the sport. I started playing tournaments all over Ireland.

“I won the plate at the Junior Louth Open one year. It was a consolation prize, but it was the first thing I’d won in tennis so I felt fairly proud of it.

“I kept playing from that point onwards, getting to see all the players from around the country and competing against them, and when I was 18 I climbed to second in the national junior rankings.

“When I was knocking around at 15 or 16, I was always further down the rankings, but I kept going and it seemed to take off as I got older.

“I got picked for the Irish junior international team so I got to travel around Europe and North-Africa. I was living the dream, but the real aim was always to get playing for Ireland at senior level. That was what it was all about for me. Growing up, that was what I dreamed about.

“I went to college in Wales and continued playing tennis there while getting a degree in PE teaching. I was on a small scholarship so I got the opportunity to improve and work on my game all the time, which is something I’m very grateful for looking back.

“I completed the degree in Wales and the dream was still the same; the dream was to play Davis Cup tennis with Ireland. That kept me going and got me through college.

“After that, I did a year in Exeter and moved into full-time tennis where I got into the top-800 in the world, third in the Irish singles rankings and top of the national doubles ranking.

“As I said, my lifetime goal was to play Davis Cup tennis with Ireland and I managed that in 2008. My debut was in Cairo against Egypt and I played for Ireland for almost two-years after that.

“For me, tennis was never about making money and I knew it was going to be almost impossible to make money from it because you have to get inside the top-100 in the world to really make a living at it.

“I got to make the dream of playing for my country a reality and I get huge satisfaction from that, I really do,” McGahon said.
While money wasn’t the object of his career, it was certainly a fossil fuel behind it. The expense of travelling and the burden of self-funding can become exhaustive, especially when you consider the minority treatment afforded to tennis in Ireland.

The 35-year-old found himself coaching and playing at the same time in order to pay for his tournament costs. And even when he did perform to his maximum, and win, the prize-winnings were almost token sums.

Still, he is grateful for what his career gave, and continues to give, him.

“I got to see the world and play in so many different places, but I’m not going to say that it was easy, because it was far from it. Getting to and from venues with accommodation costs, etc., it was very tough. I had to coach when I was playing, in order to earn and save for every trip. I got lucky a few times and won when I was away, but the prize sum just about covered the costs so it wasn’t something I ever thought I could make a healthy living from. It was based on passion a lot of the time.

“I knew I had a timeframe to work with. I couldn’t keep going at it forever and I’d achieved what I wanted to starting out so, in 2010, I moved back to Ireland.

“Dundalk asked me to come into the club in a managerial role so I stepped away from full-time tennis to take the job.”

It’s a decision he’s happy to have taken. Weeks like these where big tournaments are in Ireland, it lends him an unmistakable “buzz”. McGahon coincides his job in Dundalk with the role of head coach at Leinster tennis; a position which sees him tasked with developing some of the country’s budding young prospects.

He also sees an entry route for young, local players into the full-time tennis ring. Though, he concedes that there is a disparity between the facilities available to players from these shores and those of rival nations on the continent.

One thing that he admits is a positive is the Irish players gaining scholarships to develop their game in America, local-player Ruth Copas included.

“Conor Niland – an Irish player who played at Wimbledon and got inside the top-200 in the world – went to Berkeley University. That’s something that the Irish programmes are trying to create and encourage, a pathway to the United States because there is an education included as well as a top-class tennis scholarship,” he said.

“Players learn what it takes to play at a very high level in the US and that would be the idea for say, Ruth Copas. She’s doing really well at college over there and if she decides to move onto the pro-tour and see where that takes her, in a few years, she’ll still come back with a degree to her name.

“We can produce top-100 players in Ireland moving forward. We’re putting the infrastructure in place and we’re constantly striving to improve the whole set-up.

“But, countries like France and Spain have phenomenal facilities, both clay and hard court. They’re facilities we lack. Outside of Dublin, there are none of those courts and even at that, there aren’t too many of them in Ireland full stop.

“We need more, but we’re definitely taking big steps as a federation. It’s a sport that we want to encourage as many people as possible to take up because you get a great buzz out of it.

“It’s a sport that I love. It’s given me the opportunity to realise my dreams and travel the world so to have a big international tournament coming to Dundalk this week, it’s massive.

“There are players coming from all over Europe and America to play in the event. It’s not as if it’s in Dublin either, it’s in Dundalk and we want people to come, watch and embrace the tournament because it’s a great opportunity for local tennis to grow.

“This is the starting point for a lot of kids, where they would be hoping to build on their ranking points, or in some cases gain them for the first time. Dreams can start to be made here. It can be magic!”