Kilduff was a "terrific signing" 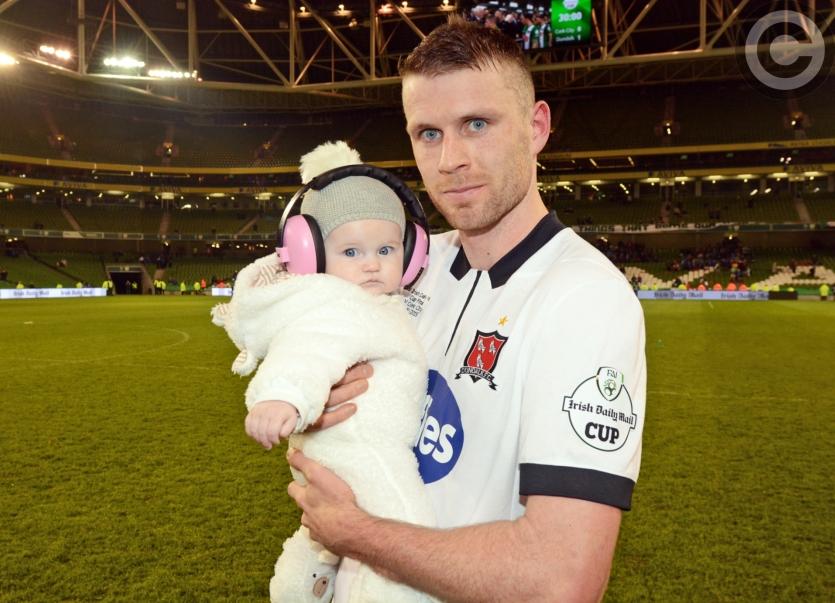 Ciarán Kilduff with his daughter after the 2015 FAI Cup final. (Pic: Ciarán Culligan)

Stephen Kenny has said that departing striker Ciarán Kilduff was “a terrific signing” and “brilliant player” during his two-year spell with Dundalk.

Kilduff’s parting from Oriel Park was confirmed through the club’s website on Sunday afternoon, with Florida-based NASL side Jacksonville Armada his destination on a two-year deal.

While Kenny admits to reluctantly letting last year’s European poster-boy, Kilduff, go, he acknowledges that it was too good of an opportunity to deprive the 28-year-old of.

“It’s just one of those things with Ciarán. He had the option to go at the start of the year and I didn’t let him go because we needed him,” Kenny said after last night’s 1-1 draw with Sligo Rovers.

“Obviously, it’s going to be a life-changing experience for him because he’s got a two-year contract. He’s nearly 29 and he was considering going back into mainstream employment, so he mightn’t have been able to stay with us next season or anyway.

“This was something that came up for him, his child and his partner to go to America for two-years and it was something that he was very excited about. We decided, not that we’re overly sentimental, to say sometimes you have to understand.

“We won the league last season and he played a big part in getting all those big European goals on our run so he did well overall for us.

“Obviously, his final act was to hit the crossbar that would have put us through (against Rosenborg) but he scored some great European goals, which probably got him the move in then end.

“It’s a great opportunity for him and we wish him well,” Kenny added.

Kilduff leaves with a record of 31 goals in 82 games for The Lilywhites.

Best of luck Ciaran. A great servant who scored some crucial goals. I'll keep the DFC flag flying in Kilcock!