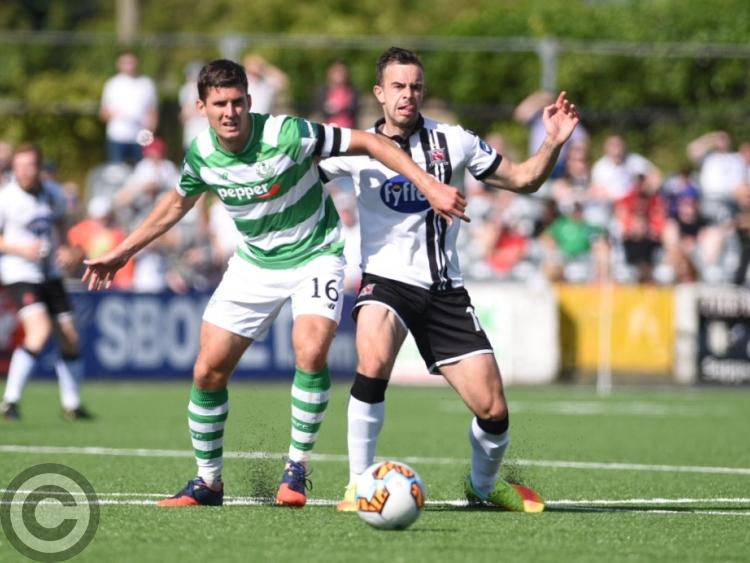 Whether it be a hangover from Europe or the absence of several key first teamers. Dundalk can ponder several different reasons for why they failed to produce a performance fitting of a home game with Shamrock Rovers this evening.

Ultimately, the reason behind their defeat was simply down to Rovers being the better team. From the moment Gary Shaw put them in front, by capitalising on slack Dundalk defending, Stephen Bradley's men outperformed, outmuscled and outmanouvered the champions.

Stephen O'Donnell tried in vain to get his troops going from midfield. But not even he could rescue something from a very frustrating game as he headed wide in the closing minutes in what was the best chance Stephen Kenny's men mustered in the second-half.

In the record books, this will go down as The Lilywhites' seventh league reverse of the campaign and first home defeat to Rovers in three-years. While, in reality, it's yet another blow in a season which continues to yield domestic inconsistency.

Rovers led 1-0 at half-time with Shaw's goal coming after five-minutes. It was the striker's second strike against Dundalk this season, though The Lilywhites rightly felt aggrieved as Paddy Barrett looked to have reasonable claims for a free-kick in the build-up.

The hosts had started the better with Dylan Connolly - one of five changes to the team beaten by Rosenborg midweek - having the first of three first-half efforts on target after 40 seconds.

He really ought to have scored it too. Having skipped clear of the Rovers defence, Connolly shot with power, but his effort went too close to Tomer Chencinski who deflected it around the post.

Shaw's goal came in Rovers' first offensive move as he turned Brian Gartland's laboured challenge before finishing to the bottom corner with the inside of his left-foot. It was a beautiful finish and one Rovers threatened to add to on several occasions as a shaky Dundalk defence struggled in Niclas Vemmelund's absence.

Both Gartland and Barrett gave possession away later in the half which presented Rovers with opportunities. Luckily, though, Graham Burke and Brandon Miele fired narrowly off-target on both occasions.

O'Donnell was the driving force behind Dundalk's first-half resurgence. By playing on the fringes of the rulebook, the 'skipper turned over possession on countless occasions with Connolly a particular beneficiary of the midfielder's industry.

While his touch wasn't always pristine, the former Bray man looked Dundalk's likeliest asset in attack. A raking ball of his gave Barrett a glorious chance to level matters shortly before the break. But, like McMillan moments before him, he shot wide of the mark from inside the penalty area.

The atmosphere in Oriel Park was strange and it wasn't to get any livelier as the Dubliners began the second-half strongly. A flurry of corners saw the Dundalk rear-guard immediately put under pressure. Rovers' third set-piece resulted in Dave McAllister getting his head firmly on the ball with Rogers at full extension to prevent a second concession.

Dundalk had a brief spell of dominance where Duffy stretched the visiting defence twice before the Tallaght men regained their composure. They used the blistering pace and trickery of Trevor Clarke, Burke and Miele to gain territory at crucial times throughout the second-half. Indeed, it was they who looked more like extending their advantage rather than Dundalk finding an equaliser.

O'Donnell's header was the closest Dundalk came to finding an entry route back into the game. Though, Stewart looked to have had a legitimate penalty claim waved away in the closing moments in what was the final call in a long line of decisions which The Lilywhites felt went against them.

Rob Rogers free-kick tally reached 19 in Rovers' favour before the close. A stat which tells a tale of both Dundalk's frustration and indiscipline in what turned out to be another disappointing Oriel Park outing.